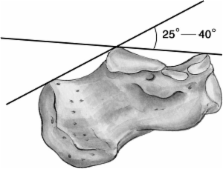 Patients treated operatively for unilateral closed displaced intra-articular calcaneal fractures from January 1, 2004 to March 31, 2008 were identified. The Böhler’s angles of both calcaneus were measured, and the measurement of the uninjured foot was used as its normal control. The difference in the value of Böhler’s angle measured preoperatively or postoperatively between the angle of the injured foot and that of the contralateral calcaneus were calculated, respectively. The change in Böhler’s angle by ratio was calculated by dividing the difference value of Böhler’s angle between bilateral calcaneus by its normal control. The injury severity was assessed according to Sanders classification. The functional outcomes were assessed using American Orthopaedic Foot & Ankle Society hindfoot scores.

274 patients were included into the study with a mean follow-up duration of 71 months. According to Sanders classification, the fracture pattern included 105 type II, 121 type III and 48 type IV fractures. According to American Orthopaedic Foot & Ankle Society hindfoot scoring system, the excellent, good, fair and poor results were achieved in 104, 132, 27, and 11 patients, respectively. The preoperative Böhler’s angle, difference value of Böhler’s angle between bilateral calcaneus, and change in Böhler’s angle by ratio each has a significant correlation with Sanders classification (rs=−0.178, P=0.003; rs=−0.174, P=0.004; rs=−0.172, P=0.005, respectively), however, is not correlated with functional outcome individually. The three postoperative measurements were all found to have a significant correlation with American Orthopaedic Foot & Ankle Society hindfoot scores (rs=0.223, P<0.001; rs=0.224, P<0.001; rs=0.220, P<0.001, respectively). However, these correlations were all weak to low.

Suzanne Tough,  Robert B. McCormack,  Robert Galpin … (2002)
Open reduction and internal fixation is the treatment of choice for displaced intra-articular calcaneal fractures at many orthopaedic trauma centers. The purpose of this study was to determine whether open reduction and internal fixation of displaced intra-articular calcaneal fractures results in better general and disease-specific health outcomes at two years after the injury compared with those after nonoperative management. Patients at four trauma centers were randomized to operative or nonoperative care. A standard protocol, involving a lateral approach and rigid internal fixation, was used for operative care. Nonoperative treatment involved no attempt at closed reduction, and the patients were treated only with ice, elevation, and rest. All fractures were classified, and the quality of the reduction was measured. Validated outcome measures included the Short Form-36 (SF-36, a general health survey) and a visual analog scale (a disease-specific scale). Between April 1991 and December 1997, 512 patients with a calcaneal fracture were treated. Of those patients, 424 with 471 displaced intra-articular calcaneal fractures were enrolled in the study. Three hundred and nine patients (73%) were followed and assessed for a minimum of two years and a maximum of eight years of follow-up. The outcomes after nonoperative treatment were not found to be different from those after operative treatment; the score on the SF-36 was 64.7 and 68.7, respectively (p = 0.13), and the score on the visual analog scale was 64.3 and 68.6, respectively (p = 0.12). However, the patients who were not receiving Workers' Compensation and were managed operatively had significantly higher satisfaction scores (p = 0.001). Women who were managed operatively scored significantly higher on the SF-36 than did women who were managed nonoperatively (p = 0.015). Patients who were not receiving Workers' Compensation and were younger (less than twenty-nine years old), had a moderately lower Böhler angle (0 degrees to 14 degrees ), a comminuted fracture, a light workload, or an anatomic reduction or a step-off of < or =2 mm after surgical reduction (p = 0.04) scored significantly higher on the scoring scales after surgery compared with those who were treated nonoperatively. Without stratification of the groups, the functional results after nonoperative care of displaced intra-articular calcaneal fractures were equivalent to those after operative care. However, after unmasking the data by removal of the patients who were receiving Workers' Compensation, the outcomes were significantly better in some groups of surgically treated patients.

Displaced intra-articular fractures of the calcaneus.

Current concepts in the treatment of intra-articular calcaneal fractures: results of a nationwide survey

T. Schepers,  E. M. M. Van Lieshout,  T. M. van Ginhoven … (2007)
The treatment of intra-articular calcaneal fractures is controversial and randomised clinical trials are scarce. Moreover, the socio-economic cost remains unclear. The aim of this study was to estimate the incidence, treatment preferences and socio-economic cost of this complex fracture in the Netherlands. This data may aid in planning future clinical trials and support education. The method of study was of a cross-sectional survey design. A written survey was sent to one representative of both the traumatology and the orthopaedic staff in each hospital in the Netherlands. Data on incidence, treatment modalities, complications and follow-up strategies were recorded. The socio-economic cost was calculated. The average response rate was 70%. Fracture classifications, mostly by Sanders and Essex-Lopresti, were applied by 29%. Annually, 920 intra-articular calcaneal fractures (0.4% incidence rate) were treated, mainly with ORIF (46%), conservative (39%) and percutaneous (10%) treatment. The average non-weight-bearing mobilisation was 9 weeks (SD 2 weeks). An outcome score, mainly AOFAS, was documented by 7%. A secondary arthrodesis was performed in 21% of patients. The socio-economic cost was estimated to be €21.5–30.7 million. Dutch intra-articular calcaneal fracture incidence is at least 0.4% of all fractures presenting to hospitals. Better insight into treatment modalities currently employed and costs in the Netherlands was obtained.