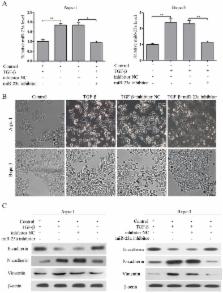 Mechanism of the mesenchymal-epithelial transition and its relationship with metastatic tumor formation.

Jacek Niklinski,  Mirosław Kozłowski,  Mauro Papotti … (2012)
MicroRNAs (miRNAs) are small non-coding RNAs which regulate gene expression by base-pairing to the 3'-UTR of the target mRNA. Recently, miRNAs have been shown to regulate cancer metastasis, however, central molecular mechanisms of this ability still need to be investigated. Epithelial to mesenchymal transition (EMT), which is characterized especially by repression of E-cadherin expression and increased cell motility, is an essential component of cancer metastasis and progression. In the present study, we found that Snai1, a known transcriptional repressor of E-cadherin and modulator of EMT, is post-transcriptionally targeted by miRNA-30a in non-small cell lung cancer (NSCLC). Consistent with this, microRNA-30a expression was found inversely proportional to the invasive potential of various NSCLC cell lines, correlating positively with E-cadherin (epithelial marker) and negatively with N-cadherin (mesenchymal marker) expression. Forced re-introduction of miR-30a significantly altered cell morphology, in vitro invasion and migration of invasive cell lines, this being paralleled by a downregulation of Snai1 and upregulation of E-cadherin expression. Using a chicken embryonic metastasis assay, we found that miR-30a suppresses in vivo distant metastasis to the lungs and liver. Finally, we screened the expression of miR-30a in 64 consecutively resected NSCLC patients and found that, in 81% of the patients, expression of miR-30a was downregulated significantly (p < 0.0001) in tumors compared to corresponding normal tissues. These results suggest that miR-30a targets Snai1, inhibits invasion and metastasis, and is downregulated in NSCLC. Copyright © 2011 UICC.