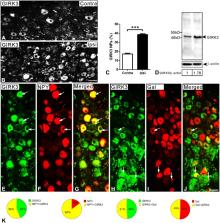 G protein-gated inwardly rectifying potassium (GIRK) channels are involved in the regulation of neuronal excitability. Four GIRK subunits (GIRK1-4) are expressed in rat dorsal root ganglia (DRGs). Recently, we have characterized the expression of GIRK1 and −2, and both are downregulated in rat DRGs and spinal cord after a complete sciatic nerve transection (axotomy). Here, we aimed to study the neurochemical characteristics of GIRK3, and its regulation in rat DRGs and spinal cord induced by nerve injury.

A sciatic nerve axotomy was performed to study the influences of injury on GIRK3 expression in DRGs and spinal cord. A dorsal root rhizotomy and a sciatic nerve crush were employed to study the axonal transport of GIRK3 protein, respectively. Immunohistochemistry analysis was employed for investigating the neurochemical characteristics of GIRK3.

In control DRGs, ~18% of neuron profiles (NPs) were GIRK3-positive ( +), and ~41%, ~48% and ~45% of GIRK3 + NPs were CGRP +, IB4 + and NF200 +, respectively. GIRK3-like immunoreactivity was observed in glabrous skin of hind paws and axons originating from DRG neurons. Fourteen days after axotomy, more than one-third of DRG NPs were GIRK3 +, and among these ~51% and ~56% coexpressed galanin and neuropeptide Y, respectively. In control animals, a small group of interneurons found in the dorsal horn was GIRK3 +. In addition, GIRK3 + processes could be observed in superficial laminae of spinal dorsal horn. After nerve injury, the intensity of GIRK3-like immunoreactivity in the superficial layers was increased. Evidence based on rhizotomy and sciatic nerve crush indicated both anterograde and retrograde transport of GIRK3.

Our study demonstrates that GIRK3 is expressed in sensory neurons and spinal cord. GIRK3 has both anterograde and retrograde axonal transport. GIRK3 expression can be regulated by peripheral nerve injury.

Christian Lüscher,  Paul A. Slesinger (2010)
G protein-gated inwardly rectifying potassium (GIRK) channels hyperpolarize neurons in response to activation of many different G protein-coupled receptors and thus control the excitability of neurons through GIRK-mediated self-inhibition, slow synaptic potentials and volume transmission. GIRK channel function and trafficking are highly dependent on the channel subunit composition. Pharmacological investigations of GIRK channels and studies in animal models suggest that GIRK activity has an important role in physiological responses, including pain perception and memory modulation. Moreover, abnormal GIRK function has been implicated in altering neuronal excitability and cell death, which may be important in the pathophysiology of diseases such as epilepsy, Down's syndrome, Parkinson's disease and drug addiction. GIRK channels may therefore prove to be a valuable new therapeutic target.

C Lüscher,  James A R Nicoll,  Yi-Yin Jan … (1997)
To study the role of G protein-coupled, inwardly rectifying K+ (GIRK) channels in mediating neurotransmitter actions in hippocampal neurons, we have examined slices from transgenic mice lacking the GIRK2 gene. The outward currents evoked by agonists for GABA(B) receptors, 5HT1A receptors, and adenosine A1 receptors were essentially absent in mutant mice, while the inward current evoked by muscarinic receptor activation was unaltered. In contrast, the presynaptic inhibitory action of a number of presynaptic receptors on excitatory and inhibitory terminals was unaltered in mutant mice. These included GABA(B), adenosine, muscarinic, metabotropic glutamate, and NPY receptors on excitatory synapses and GABA(B) and opioid receptors on inhibitory synapses. These findings suggest that a number of G protein-coupled receptors activate the same class of postsynaptic K+ channel, which contains GIRK2. In addition, the GIRK2 channels play no role in the inhibition mediated by presynaptic G protein-coupled receptors, suggesting that the same receptor can couple to different effector systems according to its subcellular location in the neuron.

David Wynick,  Alexandrea Holmes,  Keith Hobson … (2014)
Galanin was first identified 30 years ago as a "classic neuropeptide," with actions primarily as a modulator of neurotransmission in the brain and peripheral nervous system. Other structurally-related peptides-galanin-like peptide and alarin-with diverse biologic actions in brain and other tissues have since been identified, although, unlike galanin, their cognate receptors are currently unknown. Over the last two decades, in addition to many neuronal actions, a number of nonneuronal actions of galanin and other galanin family peptides have been described. These include actions associated with neural stem cells, nonneuronal cells in the brain such as glia, endocrine functions, effects on metabolism, energy homeostasis, and paracrine effects in bone. Substantial new data also indicate an emerging role for galanin in innate immunity, inflammation, and cancer. Galanin has been shown to regulate its numerous physiologic and pathophysiological processes through interactions with three G protein-coupled receptors, GAL1, GAL2, and GAL3, and signaling via multiple transduction pathways, including inhibition of cAMP/PKA (GAL1, GAL3) and stimulation of phospholipase C (GAL2). In this review, we emphasize the importance of novel galanin receptor-specific agonists and antagonists. Also, other approaches, including new transgenic mouse lines (such as a recently characterized GAL3 knockout mouse) represent, in combination with viral-based techniques, critical tools required to better evaluate galanin system physiology. These in turn will help identify potential targets of the galanin/galanin-receptor systems in a diverse range of human diseases, including pain, mood disorders, epilepsy, neurodegenerative conditions, diabetes, and cancer. Copyright © 2014 by The American Society for Pharmacology and Experimental Therapeutics.