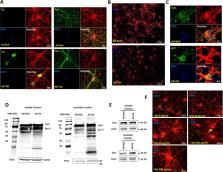 HIV-1 Tat is known to be released by HIV infected non-neuronal cells in the brain, and after entering neurons, compromises brain homeostasis by impairing pro-survival pathways, thus contributing to the development of HIV-associated CNS disorders commonly observed in individuals living with HIV. Here, we demonstrate that synapsins, phosphoproteins that are predominantly expressed in neuronal cells and play a vital role in modulating neurotransmitter release at the pre-synaptic terminal, and neuronal differentiation become targets for Tat through autophagy and protein quality control pathways. We demonstrate that the presence of Tat in neurons results in downregulation of BAG3, a co-chaperone for heat shock proteins (Hsp70/Hsc70) that is implicated in protein quality control (PQC) processes by eliminating mis-folded and damaged proteins, and selective macroautophagy. Our results show that treatment of cells with Tat or suppression of BAG3 expression by siRNA in neuronal cells disturbs subcellular distribution of synapsins and synaptotagmin 1 (Syt1) leading to their accumulation in the neuronal soma and along axons in a punctate pattern, rather than being properly distributed at axon-terminals. Further, our results revealed that synapsins partially lost their stability and their removal via lysosomal autophagy was noticeably impaired in cells with low levels of BAG3. The observed impairment of lysosomal autophagy, under this condition, is likely caused by cells losing their ability to process LC3-I to LC3-II, in part due to a decrease in the ATG5 levels upon BAG3 knockdown. These observations ascribe a new function for BAG3 in controlling synaptic communications and illuminate a new downstream target for Tat to elicit its pathogenic effect in impacting neuronal cell function and behavior.

Martin Gamerdinger,  Parvana Hajieva,  A Kaya … (2009)
The Hsc/Hsp70 co-chaperones of the BAG (Bcl-2-associated athanogene) protein family are modulators of protein quality control. We examined the specific roles of BAG1 and BAG3 in protein degradation during the aging process. We show that BAG1 and BAG3 regulate proteasomal and macroautophagic pathways, respectively, for the degradation of polyubiquitinated proteins. Moreover, using models of cellular aging, we find that a switch from BAG1 to BAG3 determines that aged cells use more intensively the macroautophagic system for turnover of polyubiquitinated proteins. This increased macroautophagic flux is regulated by BAG3 in concert with the ubiquitin-binding protein p62/SQSTM1. The BAG3/BAG1 ratio is also elevated in neurons during aging of the rodent brain, where, consistent with a higher macroautophagy activity, we find increased levels of the autophagosomal marker LC3-II as well as a higher cathepsin activity. We conclude that the BAG3-mediated recruitment of the macroautophagy pathway is an important adaptation of the protein quality control system to maintain protein homeostasis in the presence of an enhanced pro-oxidant and aggregation-prone milieu characteristic of aging.

Christian Behl,  Peter A Clement,  Martin Gamerdinger … (2011)
Increasing evidence indicates the existence of selective autophagy pathways, but the manner in which substrates are recognized and targeted to the autophagy system is poorly understood. One strategy is transport of a particular substrate to the aggresome, a perinuclear compartment with high autophagic activity. In this paper, we identify a new cellular pathway that uses the specificity of heat-shock protein 70 (Hsp70) to misfolded proteins as the basis for aggresome-targeting and autophagic degradation. This pathway is regulated by the stress-induced co-chaperone Bcl-2-associated athanogene 3 (BAG3), which interacts with the microtubule-motor dynein and selectively directs Hsp70 substrates to the motor and thereby to the aggresome. Notably, aggresome-targeting by BAG3 is distinct from previously described mechanisms, as it does not depend on substrate ubiquitination.

HspB8 chaperone activity toward poly(Q)-containing proteins depends on its association with Bag3, a stimulator of macroautophagy.

Jacques Landry,  S Seguin,  Serena Carra … (2008)
Mutations in HspB8, a member of the B group of heat shock proteins (Hsp), have been associated with human neuromuscular disorders. However, the exact function of HspB8 is not yet clear. We previously demonstrated that overexpression of HspB8 in cultured cells prevents the accumulation of aggregation-prone proteins such as the polyglutamine protein Htt43Q. Here we report that HspB8 forms a stable complex with Bag3 in cells and that the formation of this complex is essential for the activity of HspB8. Bag3 overexpression resulted in the accelerated degradation of Htt43Q, whereas Bag3 knockdown prevented HspB8-induced Htt43Q degradation. Additionally, depleting Bag3 caused a reduction in the endogenous levels of LC3-II, a key molecule involved in macroautophagy, whereas overexpressing Bag3 or HspB8 stimulated the formation LC3-II. These results suggested that the HspB8-Bag3 complex might stimulate the degradation of Htt43Q by macroautophagy. This was confirmed by the observation that treatments with macroautophagy inhibitors significantly decreased HspB8- and Bag3-induced degradation of Htt43Q. We conclude that the HspB8 activity is intrinsically dependent on Bag3, a protein that may facilitate the disposal of doomed proteins by stimulating macroautophagy.