Continuous wound infusion with chloroprocaine in a pig model of surgical lesion: drug absorption and effects on inflammatory response 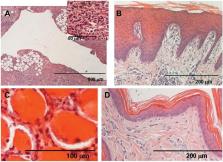 Continuous wound infusion (CWI) may protect from inflammation, hyperalgesia and persistent pain. Current local anesthetics display suboptimal pharmacokinetic profile during CWI; chloroprocaine (CP) has ideal characteristics, but has never been tested for CWI. We performed an animal study to investigate the pharmacokinetic profile and anti-inflammatory effect of CP during CWI. A total of 14 piglets received an infusion catheter after pararectal laparotomy and were randomly allocated to one of three groups: 5 mL/h infusion of saline (group A), CP 1.5% (group B) and CP 0.5% (group C). Blood sampling was performed to assess absorption and systemic inflammation at 0, 3, 6, 12, 24, 48, 72, 96, 102 and 108 hours. The wound and contralateral healthy abdominal wall were sampled for histological analyses. Absorption of CP from the site of infusion, evaluated as the plasmatic concentrations of CP and its metabolite, 4-amino-2-chlorobenzoic acid (CABA), showed a peak during the first 6 hours, but both CP and its metabolite rapidly disappeared after stopping CP infusion. Local inflammation was reduced in groups B and C (CP-treated p < 0.001), in a CP dose-dependent fashion. While CP inhibited in a dose-dependent manner pig mononuclear cells (MNCs) in vitro proliferation to a polyclonal activator, no effect on systemic cytokines’ concentrations or on ex vivo monocytes’ responsiveness was observed, suggesting the lack of systemic effects, in line with the very short half-life of CP in plasma. CP showed a very good profile for use in CWI, with dose-dependent local anti-inflammatory effects, limited absorption and rapid clearance from the bloodstream upon discontinuation. No cytotoxicity or side effects were observed. CP, therefore, may represent an optimal choice for clinical CWI, adaptable to each patient’s need, and protective on wound inflammatory response (and hyperalgesia) after surgery.

Anti-inflammatory properties of local anesthetics and their present and potential clinical implications.

R Sinclair,  J Cassuto,  M Bonderovic (2006)
Development of new local anesthetic agents has been focused on the potency of their nerve-blocking effects, duration of action and safety and has resulted in a substantial number of agents in clinical use. It is well established and well documented that the nerve blocking effects of local anesthetics are secondary to their interaction with the Na+ channels thereby blocking nerve membrane excitability and the generation of action potentials. Accumulating data suggest however that local anesthetics also possess a wide range of anti-inflammatory actions through their effects on cells of the immune system, as well as on other cells, e.g. microorganisms, thrombocytes and erythrocytes. The potent anti-inflammatory properties of local anesthetics, superior in several aspects to traditional anti-inflammatory agents of the NSAID and steroid groups and with fewer side-effects, has prompted clinicians to introduce them in the treatment of various inflammation-related conditions and diseases. They have proved successful in the treatment of burn injuries, interstitial cystitis, ulcerative proctitis, arthritis and herpes simplex infections. The detailed mechanisms of action are not fully understood but seem to involve a reversible interaction with membrane proteins and lipids thus regulating cell metabolic activity, migration, exocytosis and phagocytosis.

COX-dependent mechanisms involved in the antinociceptive action of NSAIDs at central and peripheral sites.

Maria Burian,  Gerd Geisslinger (2005)
Despite the diverse chemical structure of aspirin-like drugs, the antinociceptive effect of NSAIDs is mainly due to their common property of inhibiting cyclooxygenases involved in the formation of prostaglandins. Prostaglandins are potent hyperalgesic mediators which modulate multiple sites along the nociceptive pathway and enhance both transduction (peripheral sensitizing effect) and transmission (central sensitizing effect) of nociceptive information. Inhibition of the formation of prostaglandins at peripheral and central sites by NSAIDs thus leads to the normalisation of the increased pain threshold associated with inflammation. The contribution of peripheral and central mechanisms to the overall antinociceptive action of NSAIDs depends on several factors including the location of the targets of drug action, the site of drug delivery and the uptake and distribution to the site of action. The present work reviews the data on the regulation and location of cyclooxygenases at central and peripheral sites of the nociceptive pathway and focuses on the role of COX in the generation and maintenance of pain hypersensitivity. Experimental and clinical evidences are used to evaluate the significance of the peripheral and central antihyperalgesic effects of NSAIDs.