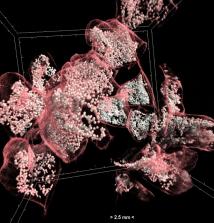 Micro-computed tomography (micro-CT) is a high-resolution 3D-imaging technique which is now increasingly applied in biological studies focusing on taxonomy and functional morphology. The creation of virtual representations of specimens can increase availability of otherwise underexploited and inaccessible samples. The 3D model dataset can be also further processed through volume rendering and morphometric analysis. The success of micro-CT as a visualisation technique depends on several methodological manipulations, including the use of contrast enhancing staining agents, filters, scanning mediums, containers, exposure time and frame averaging. The aim of this study was to standardise a series of micro-CT scanning and 3D analysis protocols for a marine gastropod species, Hexaplex trunculus . The analytical protocols have followed all the developmental stages of this gastropod, from egg capsules and embryos to juveniles and adults.

Sarah Faulwetter,  Aikaterini Vasileiadou,  Michail Kouratoras … (2013)
Abstract Continuous improvements in the resolution of three-dimensional imaging have led to an increased application of these techniques in conventional taxonomic research in recent years. Coupled with an ever increasing research effort in cybertaxonomy, three-dimensional imaging could give a boost to the development of virtual specimen collections, allowing rapid and simultaneous access to accurate virtual representations of type material. This paper explores the potential of micro-computed tomography (X-ray micro-tomography), a non-destructive three-dimensional imaging technique based on mapping X-ray attenuation in the scanned object, for supporting research in systematics and taxonomy. The subsequent use of these data as virtual type material, so-called “cybertypes”, and the creation of virtual collections lie at the core of this potential. Sample preparation, image acquisition, data processing and presentation of results are demonstrated using polychaetes (bristle worms), a representative taxon of macro-invertebrates, as a study object. Effects of the technique on the morphological, anatomical and molecular identity of the specimens are investigated. The paper evaluates the results and discusses the potential and the limitations of the technique for creating cybertypes. It also discusses the challenges that the community might face to establish virtual collections. Potential future applications of three-dimensional information in taxonomic research are outlined, including an outlook to new ways of producing, disseminating and publishing taxonomic information.

Désirée van der Heijde,  Donald van der Peet,  E Pauwels … (2013)
High resolution X-ray computed tomography (CT), or microCT, is a promising and already widely used technique in various scientific fields. Also for histological purposes it has great potential. Although microCT has proven to be a valuable technique for the imaging of bone structures, the visualization of soft tissue structures is still an important challenge due to their low inherent X-ray contrast. One way to achieve contrast enhancement is to make use of contrast agents. However, contrary to light and electron microscopy, knowledge about contrast agents and staining procedures is limited for X-ray CT. The purpose of this paper is to identify useful X-ray contrast agents for soft tissue visualization, which can be applied in a simple way and are also suited for samples larger than (1 cm)(3) . And 28 chemical substances have been investigated. All chemicals were applied in the form of concentrated aqueous solutions in which the samples were immersed. First, strips of green Bacon were stained to evaluate contrast enhancement between muscle and adipose tissue. Furthermore it was also tested whether the contrast agents remained fixed in the tissue after staining by re-immersing them in water. Based on the results, 12 contrast agents were selected for further testing on postmortem mice hind legs, containing a variety of different tissues, including muscle, fat, bone, cartilage and tendons. It was evaluated whether the contrast agents allowed a clearer distinction between the different soft tissue structures present. Finally also penetration depth was measured. And 26 chemicals resulted in contrast enhancement between muscle and adipose tissue in the Bacon strips. Mercury(II)chloride (HgCl2 ), phosphotungstic acid (PTA), phosphomolybdic acid (PMA) and ammonium orthomolybdate ((NH4 )2 MoO4 ) remained fixed after re-immersion in water. The penetration tests showed that potassium iodide (KI) and sodium tungstate can be most efficiently used for large samples of the order of several tens of cm(3) . PMA, PTA, HgCl2 and also to a lesser extent Na2 WO4 and (NH4 )2 MoO4 allowed a clearer distinction between the different soft tissue structures present. © 2013 The Authors Journal of Microscopy © 2013 Royal Microscopical Society.

This work was funded under the project ECCO (HFRI, Hellenic Foundation for Research and Innovation for the support of Post-doctoral Researchers, project ID 343).