Centrosome separation in late G2/ early prophase requires precise spatial coordination that is determined by a balance of forces promoting and antagonizing separation. The major effector of centrosome separation is the kinesin Eg5. However, the identity and regulation of Eg5-antagonizing forces is less well characterized. By manipulating candidate components, we find that centrosome separation is reversible and that separated centrosomes congress toward a central position underneath the flat nucleus. This positioning mechanism requires microtubule polymerization, as well as actin polymerization. We identify perinuclear actin structures that form in late G2/early prophase and interact with microtubules emanating from the centrosomes. Disrupting these structures by breaking the interactions of the linker of nucleoskeleton and cytoskeleton (LINC) complex with perinuclear actin filaments abrogates this centrosome positioning mechanism and causes an increase in subsequent chromosome segregation errors. Our results demonstrate how geometrical cues from the cell nucleus coordinate the orientation of the emanating spindle poles before nuclear envelope breakdown. 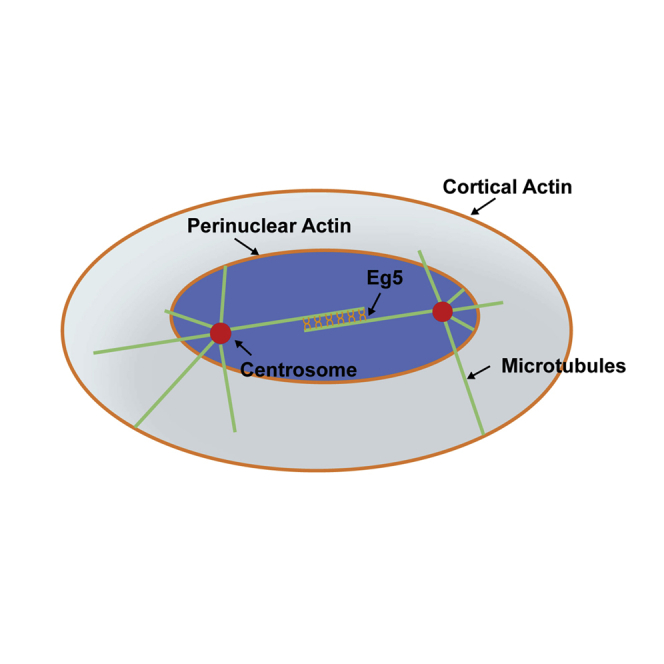 Stiff et al. describe how prophase-specific perinuclear actin in connection with polymerizing microtubules regulates the positioning of centrosome separation before nuclear envelope breakdown. This depends on the interaction of the LINC complex with actin. Breaking this link results in centrosome mispositioning and an increase in sister chromatid segregation errors.

Effects of cytochalasin and phalloidin on actin

Tarun Kapoor,  Thomas U Mayer,  Margaret L. Coughlin … (2000)
Monastrol, a cell-permeable small molecule inhibitor of the mitotic kinesin, Eg5, arrests cells in mitosis with monoastral spindles. Here, we use monastrol to probe mitotic mechanisms. We find that monastrol does not inhibit progression through S and G2 phases of the cell cycle or centrosome duplication. The mitotic arrest due to monastrol is also rapidly reversible. Chromosomes in monastrol-treated cells frequently have both sister kinetochores attached to microtubules extending to the center of the monoaster (syntelic orientation). Mitotic arrest–deficient protein 2 (Mad2) localizes to a subset of kinetochores, suggesting the activation of the spindle assembly checkpoint in these cells. Mad2 localizes to some kinetochores that have attached microtubules in monastrol-treated cells, indicating that kinetochore microtubule attachment alone may not satisfy the spindle assembly checkpoint. Monastrol also inhibits bipolar spindle formation in Xenopus egg extracts. However, it does not prevent the targeting of Eg5 to the monoastral spindles that form. Imaging bipolar spindles disassembling in the presence of monastrol allowed direct observations of outward directed forces in the spindle, orthogonal to the pole-to-pole axis. Monastrol is thus a useful tool to study mitotic processes, detection and correction of chromosome malorientation, and contributions of Eg5 to spindle assembly and maintenance.

Paul T. Conduit,  Alan Wainman,  Jordan W. Raff (2015)
It has become clear that the role of centrosomes extends well beyond that of important microtubule organizers. There is increasing evidence that they also function as coordination centres in eukaryotic cells, at which specific cytoplasmic proteins interact at high concentrations and important cell decisions are made. Accordingly, hundreds of proteins are concentrated at centrosomes, including cell cycle regulators, checkpoint proteins and signalling molecules. Nevertheless, several observations have raised the question of whether centrosomes are essential for many cell processes. Recent findings have shed light on the functions of centrosomes in animal cells and on the molecular mechanisms of centrosome assembly, in particular during mitosis. These advances should ultimately allow the in vitro reconstitution of functional centrosomes from their component proteins to unlock the secrets of these enigmatic organelles.