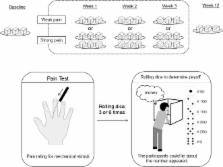 Operant conditioning has long been believed to influence the pain experience through a psychological reward pathway. This study was formulated to test the hypothesis that pain sensitivity may be enhanced >3 months if a monetary reward works as a reinforcement.

Forty healthy subjects volunteered to participate in this study. The subjects repeatedly underwent pain testing via mechanical stimuli, and they rolled dice three (or six) times to gain money at the following five time points: baseline, three reinforcement sessions, and last session. The payoff was determined by roll of the dice. The subjects were instructed to roll the dice into a masked stand three times per session and informed that no one monitored the number of dice actually appeared. The subjects were also informed that they could roll the dice another three times when they reported strong pain during reinforcement sessions.

The amount of individual payoff had significantly increased at last session compared with the values obtained at baseline; however, no changes were identified in terms of the pain ratings for mechanical stimuli during all sessions.

The results suggest that the psychological reward pathway does not always involve pain perception, and it is difficult to conclude whether pain sensitivity is operantly changed through the monetary reward in healthy individuals. Further investigation is required.

Pain and the brain: specificity and plasticity of the brain in clinical chronic pain.

Xinyue Zhou,  Kathleen Vohs,  Roy Baumeister (2009)
People often get what they want from the social system, and that process is aided by social popularity or by having money. Money can thus possibly substitute for social acceptance in conferring the ability to obtain benefits from the social system. Moreover, past work has suggested that responses to physical pain and social distress share common underlying mechanisms. Six studies tested relationships among reminders of money, social exclusion, and physical pain. Interpersonal rejection and physical pain caused desire for money to increase. Handling money (compared with handling paper) reduced distress over social exclusion and diminished the physical pain of immersion in hot water. Being reminded of having spent money, however, intensified both social distress and physical pain.