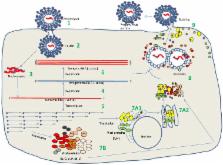 Peste des petits ruminants (PPR) is caused by a Morbillivirus that belongs to the family Paramyxoviridae. PPR is an acute, highly contagious and fatal disease primarily affecting goats and sheep, whereas cattle undergo sub-clinical infection. With morbidity and mortality rates that can be as high as 90%, PPR is classified as an OIE (Office International des Epizooties)-listed disease. Considering the importance of sheep and goats in the livelihood of the poor and marginal farmers in Africa and South Asia, PPR is an important concern for food security and poverty alleviation. PPR virus (PPRV) and rinderpest virus (RPV) are closely related Morbilliviruses. Rinderpest has been globally eradicated by mass vaccination. Though a live attenuated vaccine is available against PPR for immunoprophylaxis, due to its instability in subtropical climate (thermo-sensitivity), unavailability of required doses and insufficient coverage (herd immunity), the disease control program has not been a great success. Further, emerging evidence of poor cross neutralization between vaccine strain and PPRV strains currently circulating in the field has raised concerns about the protective efficacy of the existing PPR vaccines. This review summarizes the recent advancement in PPRV replication, its pathogenesis, immune response to vaccine and disease control. Attempts have also been made to highlight the current trends in understanding the host susceptibility and resistance to PPR.

Interferons and viruses: an interplay between induction, signalling, antiviral responses and virus countermeasures.

Richard E. Randall,  S. Goodbourn (2007)
The interferon (IFN) system is an extremely powerful antiviral response that is capable of controlling most, if not all, virus infections in the absence of adaptive immunity. However, viruses can still replicate and cause disease in vivo, because they have some strategy for at least partially circumventing the IFN response. We reviewed this topic in 2000 [Goodbourn, S., Didcock, L. & Randall, R. E. (2000). J Gen Virol 81, 2341-2364] but, since then, a great deal has been discovered about the molecular mechanisms of the IFN response and how different viruses circumvent it. This information is of fundamental interest, but may also have practical application in the design and manufacture of attenuated virus vaccines and the development of novel antiviral drugs. In the first part of this review, we describe how viruses activate the IFN system, how IFNs induce transcription of their target genes and the mechanism of action of IFN-induced proteins with antiviral action. In the second part, we describe how viruses circumvent the IFN response. Here, we reflect upon possible consequences for both the virus and host of the different strategies that viruses have evolved and discuss whether certain viruses have exploited the IFN response to modulate their life cycle (e.g. to establish and maintain persistent/latent infections), whether perturbation of the IFN response by persistent infections can lead to chronic disease, and the importance of the IFN system as a species barrier to virus infections. Lastly, we briefly describe applied aspects that arise from an increase in our knowledge in this area, including vaccine design and manufacture, the development of novel antiviral drugs and the use of IFN-sensitive oncolytic viruses in the treatment of cancer.

Influenza virus propagation is impaired by inhibition of the Raf/MEK/ERK signalling cascade.

Stephan Pleschka,  O Planz,  G Hobom … (2001)
Influenza A viruses are important worldwide pathogens in humans and different animal species. The functions of most of the ten different viral proteins of this negative-strand RNA virus have been well elucidated. However, little is known about the virus-induced intracellular signalling events that support viral replication. The Raf/MEK/ERK cascade is the prototype of mitogen-activated protein (MAP) kinase cascades and has an important role in cell growth, differentiation and survival. Investigation of the function of this pathway has been facilitated by the identification of specific inhibitors such as U0126, which blocks the cascade at the level of MAPK/ERK kinase (MEK). Here we show that infection of cells with influenza A virus leads to biphasic activation of the Raf/MEK/ERK cascade. Inhibition of Raf signalling results in nuclear retention of viral ribonucleoprotein complexes (RNPs), impaired function of the nuclear-export protein (NEP/NS2) and concomitant inhibition of virus production. Thus, signalling through the mitogenic cascade seems to be essential for virus production and RNP export from the nucleus during the viral life cycle.