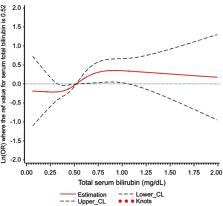 Patients and methods: This prospective cohort study included 2,502 patients who underwent PCI. Information on the study population was obtained from the Dryad Digital Repository. The patients were divided into two groups: high (>0.60 mg/dL) and low TB groups (≤0.60 mg/dL) based on the optimal cutoff value achieved in the receiver operating characteristic curve analysis. The relationships between serum TB at admission and clinical outcomes after PCI were analyzed in multivariable logistic regression models and restricted cubic spline.

Results: In all patients undergoing PCI, TB>0.60 mg/dL was associated with major adverse cardiovascular events (MACE) and cardiovascular death during a 3-year follow-up. The odds ratio (95% confidence interval) was 1.60 (1.22–2.10) and 1.81 (1.22–2.70) for MACE and cardiovascular death, respectively. The association between TB and MACE was not altered by clinical presentation ( p for interaction=0.949).

Conclusion: In patients with ACS and SA undergoing PCI, elevated serum TB was associated with increased risk of MACE and cardiovascular death.

Low serum bilirubin level as an independent predictor of stroke incidence: a prospective study in Korean men and women.

Heejin Kimm,  Jaeseong Jo,  Sun Jee … (2009)
Bilirubin is not only a waste end-product but also an antioxidant. Bilirubin is known to be associated with decrease in cardiovascular risk in men, but its relationship to stroke was not clearly understood. Serum bilirubin concentrations were measured in 78 724 health examinees (41 054 men, aged 30-89 years) from 1994 to 2001. The subjects with potential hepatobiliary diseases or Gilbert syndrome were excluded from analysis. Stroke incidence outcome was collected from hospital records of admission attributable to stroke from 1994 to 2007. Serum bilirubin measurements were divided into 4 levels: 0 to 10.2, 10.3 to 15.3, 15.4 to 22.1, and 22.2 to 34.2 micromol/L. The number of stroke cases was 1137 in men and 827 in women. In Cox proportional hazard models, participants with a higher level of bilirubin showed lower hazard ratios in men with ischemic stroke after adjustment for multiple confounding factors compared to the lowest level of bilirubin (hazard ratio [HR], 0.72; 95% CI, 0.58-0.90 in level 3; HR, 0.66; 95% CI, 0.49-0.89 in level 4; P for trend=0.016). The risk of all stroke types also decreased as bilirubin levels increased (HR, 0.81; 95% CI, 0.68-0.97 in level 3; HR, 0.74; 95% CI, 0.58-0.94 in level 4; P for trend=0.0071). However, these associations were not seen in hemorrhagic stroke or in women. These findings suggest that serum bilirubin might have some protective function against stroke risk in men.

Andrea Vincent,  P Hopkins,  Ashley R. Williams … (1996)
Mildly increased serum bilirubin has recently been suggested as a protective factor, possibly reducing the risk of coronary artery disease (CAD) by acting as an antioxidant. We tested this hypothesis by examining serum bilirubin concentrations and other coronary risk factors in 120 men and 41 women with early familial CAD and 155 control subjects. At screening, both cases and control subjects were 38 to 68 years old. Early familial CAD patients had experienced myocardial infarction, coronary artery bypass grafting, or coronary angioplasty by age 55 years for men and 65 for women and had another sibling similarly affected. The average total serum bilirubin concentration was 8.9 +/- 6.1 mumol/L in cases and 12.4 +/- 8.1 mumol/L in control subjects (P = .0001 for difference). In univariate analysis stratified by sex, serum bilirubin was strongly and inversely related to CAD risk, with relative odds of 0.4 to 0.1 (relative to the lowest quintile, P = .04 to .00001) in both men and women as bilirubin increased into the upper two quintiles. Multiple logistic regression analysis was performed including age, sex, smoking, body mass index, diabetes, hypertension, plasma measured LDL cholesterol, HDL cholesterol, triglycerides, and serum bilirubin as potential risk factors. Bilirubin entered as an independent protective factor with an odds ratio of 0.25 (P = .0015) for an increase of 17 mumol/L (1 mg/dL). The standardized logistic regression coefficient for bilirubin was -.33 compared with -.34 for HDL, suggesting that the protective effect of bilirubin on CAD risk in the population is comparable to that of HDL cholesterol. A history of cigarette smoking was associated with significantly lower serum bilirubin concentration and appeared to attenuate the protective effect of bilirubin.

High serum bilirubin is associated with the reduced risk of diabetes mellitus and diabetic nephropathy.

Ki Young Na,  Seung Seok Han,  Suhnggwon Kim … (2010)
Several studies have suggested a potential effect of serum bilirubin as an antioxidant and cytoprotectant factor. For the results presented here, we evaluated the correlation between serum bilirubin and diabetes mellitus (DM) or chronic kidney disease originated from DM (DMCKD) in a Korean population. We used a cross-sectional, population-based design to examine 93,909 subjects (aged 18-96 years, 53.0% male). The trend of P values in the odds ratios for being DM and DMCKD was calculated using patients separated into five groups based on individual serum bilirubin concentrations. The prevalence of DM and DMCKD was 6.7% and 0.8%, respectively. Higher serum bilirubin levels were significantly associated with decreased prevalence of DM in both men (P trend < 0.001) and women (P trend = 0.014). The risk of DMCKD also decreased as bilirubin levels increased in women (P trend = 0.011), but not in men (P trend = 0.467). Serum bilirubin level was inversely related to insulin resistance using the homeostasis model assessment (HOMA-IR), serum insulin, and C-reactive protein (CRP) levels in multiple linear regression analyses. The regression coefficients (B) of log-HOMA-IR, log-insulin, and log-CRP were as follows: -0.09, -0.13, and -0.60 in men; -0.07, -0.09, and -0.50 in women, respectively. All the regressions were statistically significant (P < 0.001). These results indicate that serum bilirubin might have some protective function against DM and DMCKD, although the association between high serum bilirubin and decreased prevalence of DMCKD is observed only in women.