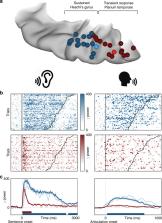 Spoken language, both perception and production, is thought to be facilitated by an ensemble of predictive mechanisms. We obtain intracranial recordings in 37 patients using depth probes implanted along the anteroposterior extent of the supratemporal plane during rhythm listening, speech perception, and speech production. These reveal two predictive mechanisms in early auditory cortex with distinct anatomical and functional characteristics. The first, localized to bilateral Heschl’s gyri and indexed by low-frequency phase, predicts the timing of acoustic events. The second, localized to planum temporale only in language-dominant cortex and indexed by high-gamma power, shows a transient response to acoustic stimuli that is uniquely suppressed during speech production. Chronometric stimulation of Heschl’s gyrus selectively disrupts speech perception, while stimulation of planum temporale selectively disrupts speech production. This work illuminates the fundamental acoustic infrastructure—both architecture and function—for spoken language, grounding cognitive models of speech perception and production in human neurobiology.

Dorsal and ventral streams: a framework for understanding aspects of the functional anatomy of language.

Gregory Hickok,  David Poeppel (2015)
Despite intensive work on language-brain relations, and a fairly impressive accumulation of knowledge over the last several decades, there has been little progress in developing large-scale models of the functional anatomy of language that integrate neuropsychological, neuroimaging, and psycholinguistic data. Drawing on relatively recent developments in the cortical organization of vision, and on data from a variety of sources, we propose a new framework for understanding aspects of the functional anatomy of language which moves towards remedying this situation. The framework posits that early cortical stages of speech perception involve auditory fields in the superior temporal gyrus bilaterally (although asymmetrically). This cortical processing system then diverges into two broad processing streams, a ventral stream, which is involved in mapping sound onto meaning, and a dorsal stream, which is involved in mapping sound onto articulatory-based representations. The ventral stream projects ventro-laterally toward inferior posterior temporal cortex (posterior middle temporal gyrus) which serves as an interface between sound-based representations of speech in the superior temporal gyrus (again bilaterally) and widely distributed conceptual representations. The dorsal stream projects dorso-posteriorly involving a region in the posterior Sylvian fissure at the parietal-temporal boundary (area Spt), and ultimately projecting to frontal regions. This network provides a mechanism for the development and maintenance of "parity" between auditory and motor representations of speech. Although the proposed dorsal stream represents a very tight connection between processes involved in speech perception and speech production, it does not appear to be a critical component of the speech perception process under normal (ecologically natural) listening conditions, that is, when speech input is mapped onto a conceptual representation. We also propose some degree of bi-directionality in both the dorsal and ventral pathways. We discuss some recent empirical tests of this framework that utilize a range of methods. We also show how damage to different components of this framework can account for the major symptom clusters of the fluent aphasias, and discuss some recent evidence concerning how sentence-level processing might be integrated into the framework.

Dynamics of ongoing activity: explanation of the large variability in evoked cortical responses.

A Sterkin,  A Arieli,  A Grinvald … (1996)
Evoked activity in the mammalian cortex and the resulting behavioral responses exhibit a large variability to repeated presentations of the same stimulus. This study examined whether the variability can be attributed to ongoing activity. Ongoing and evoked spatiotemporal activity patterns in the cat visual cortex were measured with real-time optical imaging; local field potentials and discharges of single neurons were recorded simultaneously, by electrophysiological techniques. The evoked activity appeared deterministic, and the variability resulted from the dynamics of ongoing activity, presumably reflecting the instantaneous state of cortical networks. In spite of the large variability, evoked responses in single trials could be predicted by linear summation of the deterministic response and the preceding ongoing activity. Ongoing activity must play an important role in cortical function and cannot be ignored in exploration of cognitive processes.

The assessment and analysis of handedness: The Edinburgh inventory