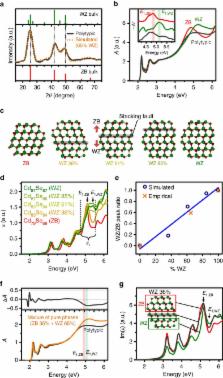 Optical, electronic and structural properties of nanocrystals fundamentally derive from crystal phase. This is especially important for polymorphic II–VI, III–V and I-III-VI 2 semiconductor materials such as cadmium selenide, which exist as two stable phases, cubic and hexagonal, each with distinct properties. However, standard crystallographic characterization through diffraction yields ambiguous phase signatures when nanocrystals are small or polytypic. Moreover, diffraction methods are low-throughput, incompatible with solution samples and require large sample quantities. Here we report the identification of unambiguous optical signatures of cubic and hexagonal phases in II–VI nanocrystals using absorption spectroscopy and first-principles electronic-structure theory. High-energy spectral features allow rapid identification of phase, even in small nanocrystals (∼2 nm), and may help predict polytypic nanocrystals from differential phase contributions. These theoretical and experimental insights provide simple and accurate optical crystallographic analysis for liquid-dispersed nanomaterials, to improve the precision of nanocrystal engineering and improve our understanding of nanocrystal reactions.

Experimental Determination of the Extinction Coefficient of CdTe, CdSe, and CdS Nanocrystals

Yang Yang,  Daniele Manna,  Peng Ip … (2000)
Nanometre-size inorganic dots, tubes and wires exhibit a wide range of electrical and optical properties that depend sensitively on both size and shape, and are of both fundamental and technological interest. In contrast to the syntheses of zero-dimensional systems, existing preparations of one-dimensional systems often yield networks of tubes or rods which are difficult to separate. And, in the case of optically active II-VI and III-V semiconductors, the resulting rod diameters are too large to exhibit quantum confinement effects. Thus, except for some metal nanocrystals, there are no methods of preparation that yield soluble and monodisperse particles that are quantum-confined in two of their dimensions. For semiconductors, a benchmark preparation is the growth of nearly spherical II-VI and III-V nanocrystals by injection of precursor molecules into a hot surfactant. Here we demonstrate that control of the growth kinetics of the II-VI semiconductor cadmium selenide can be used to vary the shapes of the resulting particles from a nearly spherical morphology to a rod-like one, with aspect ratios as large as ten to one. This method should be useful, not only for testing theories of quantum confinement, but also for obtaining particles with spectroscopic properties that could prove advantageous in biological labelling experiments and as chromophores in light-emitting diodes.