Contribution to the knowledge of the clown beetle fauna of Lebanon, with a key to all species (Coleoptera, Histeridae) 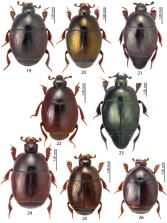 The occurrence of histerids in Lebanon has received little specific attention. Hence, an aim to enrich the knowledge of this coleopteran family through a survey across different Lebanese regions in this work. Seventeen species belonging to the genera Atholus Thomson, 1859, Hemisaprinus Kryzhanovskij, 1976, Hister Linnaeus, 1758, Hypocacculus Bickhardt, 1914, Margarinotus Marseul, 1853, Saprinus Erichson, 1834, Tribalus Erichson, 1834, and Xenonychus Wollaston, 1864 were recorded. Specimens were sampled mainly with pitfall traps baited with ephemeral materials like pig dung, decayed fish, and pig carcasses. Several species were collected by sifting soil detritus, sand cascading, and other specialized techniques. Six newly recorded species for the Lebanese fauna are the necrophilous Hister sepulchralis Erichson, 1834, Hemisaprinus subvirescens (Ménétriés, 1832), Saprinus ( Saprinus) externus (Fischer von Waldheim, 1823), Saprinus ( Saprinus) figuratus Marseul, 1855, and Saprinus ( Saprinus) niger (Motschulsky, 1849) all associated with rotting fish and dung, and the psammophilous Xenonychus tridens (Jacquelin du Val, 1853). With the exception of Hister sepulchralis , all these taxa belong to the Saprininae subfamily. A most likely undescribed species of Tribalus ( Tribalus) ( Tribalinae ) has also been collected in detritus at wet places near rivers in Lebanon. Because of the complexity of the genus Tribalus , with possible numerous new species present in the circum-Mediterranean area, the Lebanese species is not described herein, pending a revision of the genus. This study advocates further research aimed at improving taxonomic and ecological knowledge of this coleopteran family in Lebanon. The number of Histeridae species currently known from Lebanon stands at 41; a key to all species including images is included.

J Amendt,  C Richards,  Carlo P Campobasso … (2011)
Forensic entomology is the science of collecting and analysing insect evidence to aid in forensic investigations. Its main application is in the determination of the minimum time since death in cases of suspicious death, either by estimating the age of the oldest necrophagous insects that developed on the corpse, or by analysing the insect species composition on the corpse. In addition, toxicological and molecular examinations of these insects may help reveal the cause of death or even the identity of a victim, by associating a larva with its last meal, for example, in cases where insect evidence is left at a scene after human remains have been deliberately removed. Some fly species can develop not only on corpses but on living bodies too, causing myiasis. Analysis of larvae in such cases can demonstrate the period of neglect of humans or animals. Without the appropriate professional collection of insect evidence, an accurate and convincing presentation of such evidence in court will be hampered or even impossible. The present paper describes the principles and methods of forensic entomology and the optimal techniques for collecting insect evidence.

A preliminary study of forensic entomology in Medellín, Colombia.

Marta WOLFF,  Alejandro Uribe,  Adriana ORTIZ … (2001)
This is the first report of an ongoing study of insect succession on carrion carried out in Medellín, Colombia, using pigs (Sus scrofa) as a model to determine the insect sequence over 207 days. During this period, 2314 insects belonging to the following orders and families were collected: Diptera: Calliphoridae, Muscidae, Piophilidae, Sarcophagidae, Syrphidae, Otitidae; Hymenoptera: Apidae, Formicidae, Halictidae, Mutilidae, Vespidae; Coleoptera: Staphylinidae, Histeridae, Carabidae, Scarabaeidae, Silphidae, Dermestidae, Cleridae, Nitidulidae; Dermaptera: Forficulidae; Hemyptera: Gelastocoridae, Coreidae; Lepidoptera: Hesperiidae. Five decomposition stages were observed (fresh, bloated, active decay, advanced decay, and dry remains) and four insect ecological categories (necrophagous, predators, omnivorous, and incidental). During the fresh stage, the first insects that appeared were flies of the families Sarcophagidae and Muscidae and specimens of Formicidae (Hymenoptera). During the bloated period, species of Calliphoridae (Diptera) were predominant and the first to oviposit. During the third and fourth stages (active decay and advanced decay), the most abundant families were Calliphoridae and Muscidae, although Staphilinidae (Coleoptera) also stood out. During the last stage (dry remains), the dominant family was Formicidae (Hymenoptera) followed by Dermestidae (Coleoptera) with a large number of immature insects.

An initial study of insect succession and carrion decomposition in various forest habitats of Central Europe.

Daria Bajerlein,  Krzysztof Szpila,  Szymon Konwerski … (2008)
At the end of summer and beginning of fall 2005 insect succession and pig carrion decomposition were studied in pine-oak forest, hornbeam-oak forest, and alder forest in Western Poland (Central Europe). Five stages of decomposition were recognized: fresh stage, bloated stage, active decay stage, advanced decay stage, and remains stage. The highest rate of decomposition was observed in the alder forest and the lowest in the pine-oak forest. A similar composition of carrion entomofauna was found in each forest. Numerous adults of Lucilia caesar, Phormia regina and Calliphora vomitoria (Calliphoridae), Hydrotaea spp. (Muscidae), Stearibia nigriceps and Parapiophila vulgaris (Piophilidae), Necrodes littoralis and Thanatophilus rugosus (Silphidae), Creophilus maxillosus, Omalium rivulare, Oxypoda acuminata and Philonthus spp. (Staphylinidae) as well as larvae of L. caesar, P. regina, C. vomitoria, Fannidae (Diptera) and N. littoralis, C. maxillosus, Philonthus (Coleoptera) were collected. There were no differences between forests in the sequence of insect occurrence on carrion. However, differences between forests in occurrence time and activity period of some taxa were found. Implications of these results for forensic entomology are discussed.