Septal agenesis and lissencephaly with colpocephaly presenting as the ‘Crown Sign’ 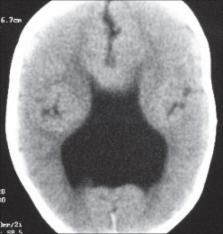 Developmental malformations of the cortex in neuronal migration disorders result in constellation of findings on radiological scanning. Isolated defects are common but sometimes they occur in varying degrees of combination giving a unique appearance on the imaging studies. We describe a case of neuronal migration disorder in which the computed tomography scan showed the presence of lissencephaly, colpocephaly. and Septal agenesis. These findings make the ventricular system appear in shape of a crown, which we refer to as “CROWN SIGN”, first described in neurosurgical literature..

Deena Zimmerman,  David Titelbaum,  J Hayward … (1991)
We report the presence of major cerebral migrational defects in five severely, multiply handicapped children with congenital cytomegalovirus (CMV) infection. These patients had both computed tomographic (CT) scan and magnetic resonance imaging (MRI) evidence of marked migrational central nervous system defects consistent anatomically with the spectrum of lissencephaly-pachygyria, a disorder commonly idiopathic or associated with chromosomal abnormalities or with unknown early gestational insults. Neuroradiologic features included broad, flat gyri, shallow sulci, incomplete opercularization, ventriculomegaly, periventricular calcifications, and white-matter hypodensity on CT scans or increased signal intensity on long-TR MRI scans. Evidence for congenital CMV infection included prenatal onset of microcephaly, periventricular calcifications, neonatal jaundice, hepatomegaly, elevated CMV-specific immunoglobulin M, or viral isolation from urine. Previous reports of the neurologic sequelae of CMV have emphasized varying degrees of psychomotor retardation, cerebral palsy and epilepsy due to polymicrogyria, periventricular calcification, microcephaly, or rarely, hydrocephalus. Our patients appear to represent extremely severe examples of the effects of CMV on neurologic growth, maturation, and development. Recognition of these severe migrational abnormalities was improved by use of MRI, a technique that affords superior definition of the nature and extent of gyral and white-matter abnormalities. We suggest that these abnormalities may be more common than has previously been recognized.

[Genetic and clinical aspects of lissencephaly].

Pierre Gressens,  Annie Laquerriere,  Natalia Gonzales … (2007)
The term lissencephaly covers a group of rare malformations sharing the common feature of anomalies in the appearance of brain convolutions (characterised by simplification or absence of folding) associated with abnormal organisation of the cortical layers as a result of neuronal migration defects during embryogenesis. Children with lissencephaly have feeding and swallowing problems, muscle tone anomalies (early hypotonia and subsequently limb hypertonia), seizures (in particular, infantile spasms) and severe psychomotor retardation. Multiple forms of lissencephaly have been described and their current classification is based on the associated malformations and underlying aetiology. Two large groups can be distinguished: classical lissencephaly (and its variants) and cobblestone lissencephaly. In classical lissencephaly (or type I), the cortex appears thickened, with four more or less disorganised layers rather than six normal layers. In the variants of classical lissencephaly, extra-cortical anomalies are also present (total or subtotal agenesis of the corpus callosum and/or cerebellar hypoplasia). The classical lissencephalies and the variant forms can be further divided into several subgroups. Four forms can be distinguished on the basis of their genetic aetiology: anomalies in the LIS1 gene (isolated lissencephaly and Miller-Dieker syndrome), anomalies in the TUBA3 and DCX genes, and lissencephalies caused by mutations in the ARX gene (XLAG syndrome, X-linked lissencephaly with agenesis of the corpus callosum). The incidence of all forms of type I lissencephaly is around 1 in 100,000 births. In addition to these four entities, isolated lissencephalies without a known genetic defect, lissencephalies with severe microcephaly (microlissencephaly) and lissencephalies associated with polymalformative syndromes are also included in the group of classical lissencephalies. Cobblestone lissencephaly (formally referred to as type II) is present in three entities: the Walker-Warburg, Fukuyama and MEB (Muscle-Eye-Brain) syndromes. It is characterised by global disorganisation of cerebral organogenesis with an uneven cortical surface (with a pebbled or cobblestone appearance). Microscopic examination reveals total disorganisation of the cortex and the absence of any distinguishable layers. Management is symptomatic only (swallowing problems require adapted feeding to prevent food aspiration, articular and respiratory physiotherapy to prevent orthopaedic problems resulting from hyptonia and treatment of gastrooesophageal reflux). The epilepsy is often resistant to treatment. The encephalopathy associated with lissencephaly is often very severe and affected children are completely dependent on the carer.

W Dobyns,  C W McCluggage (2016)
Lissencephaly is a rare malformation of the human brain manifest by a smooth cerebral surface. It is usually associated with other brain anomalies. The computed tomographic appearance in nine patients with lissencephaly, representing several separate types and syndromes, is reported. Common manifestations include a smooth cerebral surface and absent opercula that may lend a figure-eight appearance to the brain and smooth subsurface lines that represent abnormal cortical layers or an abnormal white-gray interface.