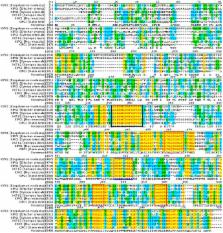 Acrosome formation and nuclear shaping are the main events in spermatogenesis. During spermiogenesis in Exopalaemon modestus, a unique microtubular structure called the acroframosome (AFS) forms in spermatids. The AFS links to a temporary organelle called the lamellar complex (LCx) leading to the formation of an everted umbrella-shaped acrosome and a dish-shaped nucleus in the mature sperm. These morphological changes require complex cell motility in which the C-terminal kinesin motor protein called KIFC1 is involved. In this study, we demonstrate that KIFC1 moves along the AFS and plays an important role in acrosome formation and nuclear shaping during spermatogenesis in E. modestus.

M Setou,  D H Seog,  Tristan Nakagawa … (2000)
Experiments with vesicles containing N-methyl-D-aspartate (NMDA) receptor 2B (NR2B subunit) show that they are transported along microtubules by KIF17, a neuron-specific molecular motor in neuronal dendrites. Selective transport is accomplished by direct interaction of the KIF17 tail with a PDZ domain of mLin-10 (Mint1/X11), which is a constituent of a large protein complex including mLin-2 (CASK), mLin-7 (MALS/Velis), and the NR2B subunit. This interaction, specific for a neurotransmitter receptor critically important for plasticity in the postsynaptic terminal, may be a regulatory point for synaptic plasticity and neuronal morphogenesis.

Dai Horiuchi,  O Klyachko,  Rosemarie V Barkus … (2007)
A screen for genes required in Drosophila eye development identified an UNC-104/Kif1 related kinesin-3 microtubule motor. Analysis of mutants suggested that Drosophila Unc-104 has neuronal functions that are distinct from those of the classic anterograde axonal motor, kinesin-1. In particular, unc-104 mutations did not cause the distal paralysis and focal axonal swellings characteristic of kinesin-1 (Khc) mutations. However, like Khc mutations, unc-104 mutations caused motoneuron terminal atrophy. The distributions and transport behaviors of green fluorescent protein-tagged organelles in motor axons indicate that Unc-104 is a major contributor to the anterograde fast transport of neuropeptide-filled vesicles, that it also contributes to anterograde transport of synaptotagmin-bearing vesicles, and that it contributes little or nothing to anterograde transport of mitochondria, which are transported primarily by Khc. Remarkably, unc-104 mutations inhibited retrograde runs by neurosecretory vesicles but not by the other two organelles. This suggests that Unc-104, a member of an anterograde kinesin subfamily, contributes to an organelle-specific dynein-driven retrograde transport mechanism.

This work was supported by National Natural Science Foundation of China (No. 41276151 and 31072198). The funders had no role in study design, data collection and analysis, decision to publish, or preparation of the manuscript.