Apoptosis as anticancer mechanism: function and dysfunction of its modulators and targeted therapeutic strategies 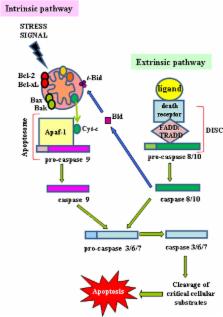 Apoptosis is a form of programmed cell death that results in the orderly and efficient removal of damaged cells, such as those resulting from DNA damage or during development. Apoptosis can be triggered by signals from within the cell, such as genotoxic stress, or by extrinsic signals, such as the binding of ligands to cell surface death receptors. Deregulation in apoptotic cell death machinery is an hallmark of cancer. Apoptosis alteration is responsible not only for tumor development and progression but also for tumor resistance to therapies. Most anticancer drugs currently used in clinical oncology exploit the intact apoptotic signaling pathways to trigger cancer cell death. Thus, defects in the death pathways may result in drug resistance so limiting the efficacy of therapies. Therefore, a better understanding of the apoptotic cell death signaling pathways may improve the efficacy of cancer therapy and bypass resistance. This review will highlight the role of the fundamental regulators of apoptosis and how their deregulation, including activation of anti-apoptotic factors (i.e., Bcl-2, Bcl-xL, etc) or inactivation of pro-apoptotic factors (i.e., p53 pathway) ends up in cancer cell resistance to therapies. In addition, therapeutic strategies aimed at modulating apoptotic activity are briefly discussed.

Stanley Korsmeyer,  Nika Danial (2004)
Programmed cell death is a distinct genetic and biochemical pathway essential to metazoans. An intact death pathway is required for successful embryonic development and the maintenance of normal tissue homeostasis. Apoptosis has proven to be tightly interwoven with other essential cell pathways. The identification of critical control points in the cell death pathway has yielded fundamental insights for basic biology, as well as provided rational targets for new therapeutics.

The microcosmos of cancer.

Scott Lowe,  Amaia Lujambio (2012)
The discovery of microRNAs (miRNAs) almost two decades ago established a new paradigm of gene regulation. During the past ten years these tiny non-coding RNAs have been linked to virtually all known physiological and pathological processes, including cancer. In the same way as certain key protein-coding genes, miRNAs can be deregulated in cancer, in which they can function as a group to mark differentiation states or individually as bona fide oncogenes or tumour suppressors. Importantly, miRNA biology can be harnessed experimentally to investigate cancer phenotypes or used therapeutically as a target for drugs or as the drug itself.

Noxa, a BH3-only member of the Bcl-2 family and candidate mediator of p53-induced apoptosis.

Tadatsugu Taniguchi,  T Yamashita,  E Oda … (2000)
A critical function of tumor suppressor p53 is the induction of apoptosis in cells exposed to noxious stresses. We report a previously unidentified pro-apoptotic gene, Noxa. Expression of Noxa induction in primary mouse cells exposed to x-ray irradiation was dependent on p53. Noxa encodes a Bcl-2 homology 3 (BH3)-only member of the Bcl-2 family of proteins; this member contains the BH3 region but not other BH domains. When ectopically expressed, Noxa underwent BH3 motif-dependent localization to mitochondria and interacted with anti-apoptotic Bcl-2 family members, resulting in the activation of caspase-9. We also demonstrate that blocking the endogenous Noxa induction results in the suppression of apoptosis. Noxa may thus represent a mediator of p53-dependent apoptosis.