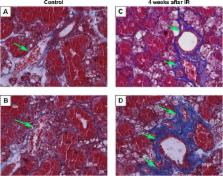 Statins are widely used lipid-lowering drugs, which have pleiotropic effects, such as anti-inflammation, and vascular protection. In our study, we investigated the radioprotective potential of simvastatin (SIM) in a murine model of radiation-induced salivary gland dysfunction.

IR caused a significant reduction of salivary secretion and amylase activity but elevation of malondialdehyde. SIM remitted the reduction of saliva secretion and restored salivary amylase activity. The protective benefits of SIM may be attributed to scavenging malondialdehyde, remitting collagen deposition, and reducing and delaying the elevation of transforming growth factor β1 expression induced by radiation.

SIM may be clinically useful to alleviate side effects of radiotherapy on salivary gland.

P Cérutti (1985)
There is convincing evidence that cellular prooxidant states--that is, increased concentrations of active oxygen and organic peroxides and radicals--can promote initiated cells to neoplastic growth. Prooxidant states can be caused by different classes of agents, including hyperbaric oxygen, radiation, xenobiotic metabolites and Fenton-type reagents, modulators of the cytochrome P-450 electron-transport chain, peroxisome proliferators, inhibitors of the antioxidant defense, and membrane-active agents. Many of these agents are promoters or complete carcinogens. They cause chromosomal damage by indirect action, but the role of this damage in carcinogenesis remains unclear. Prooxidant states can be prevented or suppressed by the enzymes of the cellular antioxidant defense and low molecular weight scavenger molecules, and many antioxidants are antipromoters and anticarcinogens. Finally, prooxidant states may modulate the expression of a family of prooxidant genes, which are related to cell growth and differentiation, by inducing alterations in DNA structure or by epigenetic mechanisms, for example, by polyadenosine diphosphate-ribosylation of chromosomal proteins.

Laura C. Erickson,  K T Finnegan,  Mary Barcellos-Hoff … (2006)
The three mammalian transforming growth factor beta (TGF-beta) isoforms are each secreted in a latent complex in which TGF-beta homodimers are non-covalently associated with homodimers of their respective pro-peptide called the latency-associated peptide (LAP). Release of TGF-beta from its LAP, called activation, is required for binding of TGF-beta to cellular receptors, making extracellular activation a critical regulatory point for TGF-beta bioavailability. Our previous work demonstrated that latent TGF-beta1 (LTGF-beta1) is efficiently activated by ionizing radiation in vivo and by reactive oxygen species (ROS) generated by Fenton chemistry in vitro. In the current study, we determined the specific ROS and protein target that render LTGF-beta1 redox sensitive. First, we compared LTGF-beta1, LTGF-beta2 and LTGF-beta3 to determine the generality of this mechanism of activation and found that redox-mediated activation is restricted to the LTGF-beta1 isoform. Next, we used scavengers to determine that ROS activation was a function of OH(.) availability, confirming oxidation as the primary mechanism. To identify which partner of the LTGF-beta1 complex was functionally modified, each was exposed to ROS and tested for the ability to form a latent complex. Exposure of TGF-beta1 did not alter its ability to associate with LAP, but exposing LAP-beta1 to ROS prohibited this phenomenon, while treatment of ROS-exposed LAP-beta1 with a mild reducing agent restored its ability to neutralize TGF-beta1 activity. Taken together, these results suggest that ROS-induced oxidation in LAP-beta1 triggers a conformational change that releases TGF-beta1. Using site-specific mutation, we identified a methionine residue at amino acid position 253 unique to LAP-beta1 as critical to ROS-mediated activation. We propose that LTGF-beta1 contains a redox switch centered at methionine 253, which allows LTGF-beta1 to act uniquely as an extracellular sensor of oxidative stress in tissues.

Eva K. Richter,  Stefan Willich,  C Rübe … (2000)
The lung is the major dose-limiting organ for radiotherapy of cancer in the thoracic region. The pathogenesis of radiation-induced lung injury at the molecular level is still unclear. Immediate cellular damage after irradiation is supposed to result in cytokine-mediated multicellular interactions with induction and progression of fibrotic tissue reactions. The purpose of this investigation was to evaluate the acute and long-term effects of radiation on the gene expression of transforming growth factor beta (TGF-beta) in a model of lung injury using fibrosis-sensitive C57BL/6 mice. The thoraces of C57BL/6 mice were irradiated with 6 and 12 Gy, respectively. Treated and sham-irradiated control mice were sacrificed at times corresponding to the latent period (1, 3, 6, 12, 24, 48, 72 hours and 1 week postirradiation), the pneumonic phase (2, 4, 8, and 16 weeks postirradiation), and the beginning of the fibrotic phase (24 weeks postirradiation). The lung tissue from three different mice per dosage and time point was analyzed by a combination of polymerase chain reaction (PCR), immunohistochemistry, and light microscopy. The mRNA expression of TGF-beta was quantified by competitive reverse transcriptase/polymerase chain reaction (RT-PCR); the cellular origin of the TGF-beta protein was identified by immunohistochemical staining (alkaline phosphatase-anti-alkaline phosphatase [APAAP]). The cytokine expression on mRNA and protein level was correlated with the histopathological alterations. Following thoracic irradiation with a single dose of 12 Gy, radiation-induced TGF-beta release in lung tissue was appreciable already within the first hours (1, 3, and 6 hours postirradiation) and reached a significant increase after 12 hours; subsequently (48 hours, 72 hours, and 1 week postirradiation) the TGF-beta expression declined to basal levels. At the beginning of the pneumonic phase, irradiation-mediated stimulation of TGF-beta release reached maximal values at 2 and 4 weeks. The elevated levels of TGF-beta mRNA during the latent phase have been found to correlate with immunohistochemical staining of alveolar macrophages. The most striking increase in TGF-beta immunoreactivity was seen during the acute phase of pneumonitis. Throughout this observation period, type II pneumocytes and fibroblasts (apart from inflammatory cells) served as important sources of TGF-beta expression. Increased TGF-beta expression was detected prominently in regions of histopathologic radiation injury. After exposure to a single radiation dose of 6 Gy, the lung tissue revealed only a minor radiation-mediated TGF-beta mRNA response. The modest upregulation ranged from 6 hours to 48 hours after irradiation. Corresponding to the only minor histopathologic changes after thoracic irradiation with 6 Gy, measurement of TGF-beta mRNA levels during the later time points revealed no significant alterations in comparison to untreated control mice. This study demonstrates an acute and long-lasting increase in the expression of TGF-beta in lung tissue following thoracic irradiation with 12 Gy. The predominant localization of TGF-beta in areas of inflammatory cell infiltrates and fibrosis suggests involvement of this cytokine in the pathogenesis of radiation-induced pulmonal fibrosis. Further studies should be performed to explore the role of other cytokines in the development of radiation injury. An improved understanding of the underlying mechanisms of pulmonary fibrosis may eventually lead to modulatory intervention at the molecular level to modify the fibrotic process.