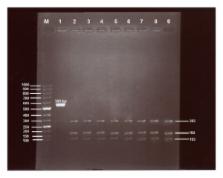 This study aimed to assess the prevalence of Babesia ovis infection in adult Rhipicephalus bursa and small ruminants in West Azerbaijan province, Iran. Blood samples were collected from 280 sheep and 122 goats of forty randomly selected flocks. Specific B. ovis fragment was detected in 67 animals (16.7%), of which 52 animals (18.6%) were sheep and 15 animals (12.2%) goats ( P < 0.05). Of the 848 R. bursa collected from naturally infested small ruminants and farm dogs, Babesia ovis was detected by PCR in salivary glands of 94 adult ticks. The frequency of B. ovis infection was higher in flocks with tick in comparison with animals without tick ( P < 0.05). Positive amplification from blood of ruminants, ticks, oviposition ticks, eggs, and larvae was subjected to restriction digestion with HphI. One RFLP profile was produced. The PCR-RFLP results indicated that one strain of B. ovis exists in this area. The results showed that the PCR was useful method to investigate the epidemiology of small ruminants' babesiosis. Furthermore, R. Bursa, which can transovarially transmit B. ovis and as well as being widely distributed in West Azerbaijan province, Iran, might play an important role in the field as a natural vector of B. ovis.

Simone M. Cacciò,  Boris Antunovic,  Annabella Moretti … (2002)
The morphologically small Babesia species isolated from naturally infected dogs in Europe, Japan, and US are described as Babesia gibsoni despite the fact that molecular techniques show that they should be assigned to two or three separate taxons. The morphologically large Babesia isolated from dogs in Europe, Africa, and US were generally classified as B. canis until it was proposed to distinguish three related, albeit genetically distinct subspecies of this genus, namely B. canis canis, B. canis rossi, and B. canis vogeli. The insight into the molecular taxonomy of canine piroplasms is, however, limited because only partial small subunit ribosomal RNA (ssrRNA) sequence data exist for two species from the B. canis group. In this work, we molecularly characterised natural Babesia infections in 11 dogs from Croatia, France, Italy, and Poland. These infections were diagnosed as caused by B. canis canis and B. canis vogeli based on the analysis of the complete sequence of the ssrRNA genes. Phylogenetic analysis confirmed that the large Babesia species of dogs belong the to the Babesia sensu stricto clade, which includes species characterised by transovarial transmission in the tick vectors and by exclusive development inside the mammalian host erythrocytes. The new data facilitate the reliable molecular diagnosis of the subspecies of B. canis.

Development of a polymerase chain reaction method for diagnosis of Babesia ovis infection in sheep and goats.

K Altay,  N Dumanli,  M Aktas (2005)
In this study, a pair of oligonucleotide primers were designed according to the nucleotide sequence of the small subunit ribosomal RNA (ssu rRNA) gene of Babesia ovis isolated from sheep in eastern Turkey. The primers were used to detect parasite DNA from blood samples of B. ovis-infected sheep and goats by polymerase chain reaction (PCR). A 549-bp DNA fragment was specifically amplified from blood samples from sheep and goats, naturally infected with B. ovis. No PCR products resulted from Babesia motasi, T. ovis, Theileria sp. OT1, Theileria sp. OT3, T. lestoquardi, B. canis, B. microti,T. annulata or normal sheep leucocytes DNA using these specific primers. B. ovis-infected erythrocytes with 1% parasitemia were subjected to 10-fold serial dilutions (from 10(-1) to 10(-9)) using an uninfected sheep erythrocytes, and DNA was extracted from each diluted sample for testing the sensitivity of the PCR. The PCR was sensitive enough to detect parasite DNA from the dilution of 10(-5) with 0.00001% parasitemia. This is more sensitive than examining 200 fields under light microscopy. In addition, 98 field samples collected from small ruminanats in eastern Turkey were tested for B. ovis infection. Four samples were positive Babesia spp. in blood smears, 21 samples were positive for B. ovis DNA by PCR. These results indicate that the PCR provides a useful diagnostic tool for the detection of B. ovis infection in sheep and goats.

PCR-based detection of Babesia bovis and Babesia bigemina in their natural host Boophilus microplus and cattle.

T Oliveira-Sequeira,  M Oliveira,  J. Araújo … (2005)
PCR and nested-PCR methods were used to assess the frequency of Babesia bovis and Babesia bigemina infection in Boophilus microplus engorged females and eggs and in cattle reared in an area with endemic babesiosis. Blood and the engorged female ticks were from 27 naturally infested calves and 25 crossbred cows. The frequency of both Babesia species was similar in calves and cows (P>0.05). Babesia bovis was detected in 23 (85.2%) calves and in 25 (100%) cows and B. bigemina was detected in 25 (92.6%) calves and in 21 (84%) cows. Mixed infections with the both Babesia species were identified in 42 animals, 21 in each age category. Of female ticks engorged on calves, 34.9% were negative and single species infection with B. bigemina (56.2%) was significantly more frequent (P 0.05) to the frequency of single B. bigemina infection (15.9%). Mixed Babesia infection was lower (P<0.01) than single species infection in female ticks engorged either in cows (5.7%) or in calves (4.3%). An egg sample from each female was analysed for the presence of Babesia species. Of the egg samples from female ticks infected with B. bovis, 26 (47.3%) were infected while from those from female ticks infected with B. bigemina 141 (76.6%) were infected (P<0.01). The results showed that although the frequency of both species of Babesia was similar in calves and cows, the infectivity of B. bigemina was higher to ticks fed on calves while to those ticks fed on cows the infectivity of both Babesia species was similar.