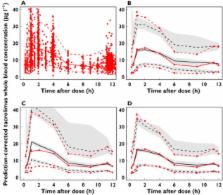 The aim was to develop a theory-based population pharmacokinetic model of tacrolimus in adult kidney transplant recipients and to externally evaluate this model and two previous empirical models.

R: a language and environment for statistical computing.

R: A Language and Environment for Statistical Computing

E Wallin,  Jens O M Karlsson,  Martin Bergstrand … (2011)
Informative diagnostic tools are vital to the development of useful mixed-effects models. The Visual Predictive Check (VPC) is a popular tool for evaluating the performance of population PK and PKPD models. Ideally, a VPC will diagnose both the fixed and random effects in a mixed-effects model. In many cases, this can be done by comparing different percentiles of the observed data to percentiles of simulated data, generally grouped together within bins of an independent variable. However, the diagnostic value of a VPC can be hampered by binning across a large variability in dose and/or influential covariates. VPCs can also be misleading if applied to data following adaptive designs such as dose adjustments. The prediction-corrected VPC (pcVPC) offers a solution to these problems while retaining the visual interpretation of the traditional VPC. In a pcVPC, the variability coming from binning across independent variables is removed by normalizing the observed and simulated dependent variable based on the typical population prediction for the median independent variable in the bin. The principal benefit with the pcVPC has been explored by application to both simulated and real examples of PK and PKPD models. The investigated examples demonstrate that pcVPCs have an enhanced ability to diagnose model misspecification especially with respect to random effects models in a range of situations. The pcVPC was in contrast to traditional VPCs shown to be readily applicable to data from studies with a priori and/or a posteriori dose adaptations.