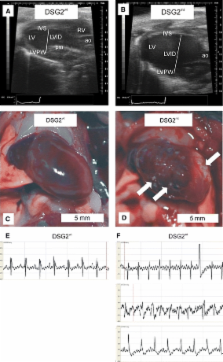 Desmosomes are cell–cell adhesion sites and part of the intercalated discs, which couple adjacent cardiomyocytes. The connection is formed by the extracellular domains of desmosomal cadherins that are also linked to the cytoskeleton on the cytoplasmic side. To examine the contribution of the desmosomal cadherin desmoglein 2 to cardiomyocyte adhesion and cardiac function, mutant mice were prepared lacking a part of the extracellular adhesive domain of desmoglein 2. Most live born mutant mice presented normal overall cardiac morphology at 2 weeks. Some animals, however, displayed extensive fibrotic lesions. Later on, mutants developed ventricular dilation leading to cardiac insufficiency and eventually premature death. Upon histological examination, cardiomyocyte death by calcifying necrosis and replacement by fibrous tissue were observed. Fibrotic lesions were highly proliferative in 2-week-old mutants, whereas the fibrotic lesions of older mutants showed little proliferation indicating the completion of local muscle replacement by scar tissue. Disease progression correlated with increased mRNA expression of c-myc, ANF, BNF, CTGF and GDF15, which are markers for cardiac stress, remodeling and heart failure. Taken together, the desmoglein 2-mutant mice display features of dilative cardiomyopathy and arrhythmogenic right ventricular cardiomyopathy, an inherited human heart disease with pronounced fibrosis and ventricular arrhythmias that has been linked to mutations in desmosomal proteins including desmoglein 2.

High-efficiency deleter mice show that FLPe is an alternative to Cre-loxP.

Lawrence Shapiro,  W Hendrickson,  Margaret M. Lehmann … (1995)
Crystal structures of the amino-terminal domain of N-cadherin provide a picture at the atomic level of a specific adhesive contact between cells. A repeated set of dimer interfaces is common to the structure in three lattices. These interactions combine to form a linear zipper of molecules that mirrors the linear structure of the intracellular filaments with which cadherins associate. This cell-adhesion zipper may provide a mechanism to marshal individual molecular adhesive interactions into strong bonds between cells.

Cristina Basso,  Domenico Corrado,  Frank I Marcus … (2009)
Arrhythmogenic right ventricular cardiomyopathy is a rare inherited heart-muscle disease that is a cause of sudden death in young people and athletes. Causative mutations in genes encoding desmosomal proteins have been identified and the disease is nowadays regarded as a genetically determined myocardial dystrophy. The left ventricle is so frequently involved as to support the adoption of the broad term arrhythmogenic cardiomyopathy. Clinical diagnosis can be achieved by demonstrating function and structure changes of the right ventricle, electrocardiogram depolarisation and repolarisation abnormalities, ventricular arrhythmias, and fibrofatty replacement through endomyocardial biopsy. Although specific, the standardised diagnostic criteria lack sensitivity for early disease and their primary application remains in establishing the diagnosis in probands. However, the main clinical targets are early detection of concealed forms and risk stratification for preventive strategies, which include physical exercise restriction, antiarrhythmic drugs, and implantable cardioverter-defibrillator therapy. Cascade genetic screening of family members of gene-positive probands allows the identification of asymptomatic carriers who would require lifelong follow-up due to the age-related penetrance.