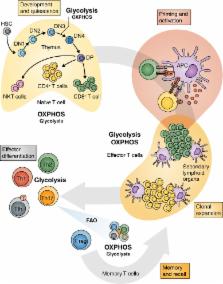 Lymphocytes must adapt to a wide array of environmental stressors as part of their normal development, during which they undergo a dramatic metabolic remodeling process. Research in this area has yielded surprising findings on the roles of diverse metabolic pathways and metabolites, which have been found to regulate lymphocyte signaling and influence differentiation, function and fate. In this review, we integrate the latest findings in the field to provide an up-to-date resource on lymphocyte metabolism.

Paul Nicklin, Philip Bergman, Bailin Zhang … (2009)
Amino acids are required for activation of the mammalian target of rapamycin (mTOR) kinase which regulates protein translation, cell growth, and autophagy. Cell surface transporters that allow amino acids to enter the cell and signal to mTOR are unknown. We show that cellular uptake of L-glutamine and its subsequent rapid efflux in the presence of essential amino acids (EAA) is the rate-limiting step that activates mTOR. L-glutamine uptake is regulated by SLC1A5 and loss of SLC1A5 function inhibits cell growth and activates autophagy. The molecular basis for L-glutamine sensitivity is due to SLC7A5/SLC3A2, a bidirectional transporter that regulates the simultaneous efflux of L-glutamine out of cells and transport of L-leucine/EAA into cells. Certain tumor cell lines with high basal cellular levels of L-glutamine bypass the need for L-glutamine uptake and are primed for mTOR activation. Thus, L-glutamine flux regulates mTOR, translation and autophagy to coordinate cell growth and proliferation.

Transcriptional architecture and chromatin landscape of the core circadian clock in mammals.

Erika L Pearce, Maya Poffenberger, Chih-Hao Chang … (2013)
Lymphocytes face major metabolic challenges upon activation. They must meet the bioenergetic and biosynthetic demands of increased cell proliferation and also adapt to changing environmental conditions, in which nutrients and oxygen may be limiting. An emerging theme in immunology is that metabolic reprogramming and lymphocyte activation are intricately linked. However, why T cells adopt specific metabolic programs and the impact that these programs have on T cell function and, ultimately, immunological outcome remain unclear. Research on tumor cell metabolism has provided valuable insight into metabolic pathways important for cell proliferation and the influence of metabolites themselves on signal transduction and epigenetic programming. In this Review, we highlight emerging concepts regarding metabolic reprogramming in proliferating cells and discuss their potential impact on T cell fate and function.