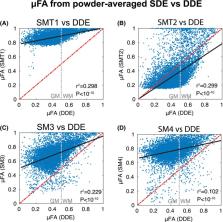 Microscopic fractional anisotropy (µFA) can disentangle microstructural information from orientation dispersion. While double diffusion encoding (DDE) MRI methods are widely used to extract accurate µFA, it has only recently been proposed that powder‐averaged single diffusion encoding (SDE) signals, when coupled with the diffusion standard model (SM) and a set of constraints, could be used for µFA estimation. This study aims to evaluate µFA as derived from the spherical mean technique (SMT) set of constraints, as well as more generally for powder‐averaged SM signals.

SDE experiments were performed at 16.4 T on an ex vivo mouse brain (Δ/δ = 12/1.5 ms). The µFA maps obtained from powder‐averaged SDE signals were then compared to maps obtained from DDE‐MRI experiments (Δ/τ/δ = 12/12/1.5 ms), which allow a model‐free estimation of µFA. Theory and simulations that consider different types of heterogeneity are presented for corroborating the experimental findings.

µFA, as well as other estimates derived from powder‐averaged SDE signals produced large deviations from the ground truth in both gray and white matter. Simulations revealed that these misestimations are likely a consequence of factors not considered by the underlying microstructural models (such as intercomponent and intracompartmental kurtosis).

Powder‐averaged SMT and (2‐component) SM are unable to accurately report µFA and other microstructural parameters in ex vivo tissues. Improper model assumptions and constraints can significantly compromise parameter specificity. Further developments and validations are required prior to implementation of these models in clinical or preclinical research.

Quantification of microscopic diffusion anisotropy disentangles effects of orientation dispersion from microstructure: applications in healthy volunteers and in brain tumors.

Filip Szczepankiewicz,  Samo Lasic,  Danielle van Westen … (2015)
The anisotropy of water diffusion in brain tissue is affected by both disease and development. This change can be detected using diffusion MRI and is often quantified by the fractional anisotropy (FA) derived from diffusion tensor imaging (DTI). Although FA is sensitive to anisotropic cell structures, such as axons, it is also sensitive to their orientation dispersion. This is a major limitation to the use of FA as a biomarker for "tissue integrity", especially in regions of complex microarchitecture. In this work, we seek to circumvent this limitation by disentangling the effects of microscopic diffusion anisotropy from the orientation dispersion. The microscopic fractional anisotropy (μFA) and the order parameter (OP) were calculated from the contrast between signal prepared with directional and isotropic diffusion encoding, where the latter was achieved by magic angle spinning of the q-vector (qMAS). These parameters were quantified in healthy volunteers and in two patients; one patient with meningioma and one with glioblastoma. Finally, we used simulations to elucidate the relation between FA and μFA in various micro-architectures. Generally, μFA was high in the white matter and low in the gray matter. In the white matter, the largest differences between μFA and FA were found in crossing white matter and in interfaces between large white matter tracts, where μFA was high while FA was low. Both tumor types exhibited a low FA, in contrast to the μFA which was high in the meningioma and low in the glioblastoma, indicating that the meningioma contained disordered anisotropic structures, while the glioblastoma did not. This interpretation was confirmed by histological examination. We conclude that FA from DTI reflects both the amount of diffusion anisotropy and orientation dispersion. We suggest that the μFA and OP may complement FA by independently quantifying the microscopic anisotropy and the level of orientation coherence.

Lauren Burcaw,  Els Fieremans,  Dmitry S. Novikov (2015)
Interpreting brain diffusion MRI measurements in terms of neuronal structure at a micrometer level is an exciting unresolved problem. Here we consider diffusion transverse to a bundle of fibers, and show theoretically, as well as using Monte Carlo simulations and measurements in a phantom made of parallel fibers mimicking axons, that the time dependent diffusion coefficient approaches its macroscopic limit slowly, in a (ln t)/t fashion. The logarithmic singularity arises due to short range disorder in the fiber packing. We identify short range disorder in axonal fibers based on histological data from the splenium, and argue that the time dependent contribution to the overall diffusion coefficient from the extra-axonal water dominates that of the intra-axonal water. This dominance may explain the bias in measuring axon diameters in clinical settings. The short range disorder is also reflected in the asymptotically linear frequency dependence of the diffusion coefficient measured with oscillating gradients, in agreement with recent experiments. Our results relate the measured diffusion to the mesoscopic structure of neuronal tissue, uncovering the sensitivity of diffusion metrics to axonal arrangement within a fiber tract, and providing an alternative interpretation of axonal diameter mapping techniques.