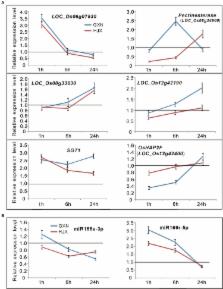 Although, microRNAs (miRNAs) have been reported to be associated with heat tolerance at the seedling stage in rice, their involvement in heat tolerance at the flowering stage is still unknown. In this study, small RNA profiling was conducted in a heat-tolerant variety Gan-Xiang-Nuo (GXN) and a heat-sensitive variety Hua-Jing-Xian-74 (HJX), respectively. Totally, 102 miRNAs were differentially expressed (DE) under heat stress. Compared to HJX, GXN had more DE miRNAs and its DE miRNAs changed earlier under heat stress. Plant Ontology (PO) analysis of the target genes revealed that many DE miRNAs were involved in flower development. As a parallel experiment, QTL mapping was also conducted and four QTLs for heat tolerance at the flowering stage were identified using chromosome single-segment substitution lines derived from GXN and HJX. Further, through integrating analysis of DE miRNAs with QTLs, we identified 8 target genes corresponding to 26 miRNAs within the four QTL regions. Some meaningful target genes such as LOC_Os12g42400, SGT1, and pectinesterase were within the QTL regions. The negative correlation between miR169r-5p and its target gene LOC_Os12g42400 was confirmed under heat stress, and overexpression of miR169r-5p enhanced heat tolerance at flowering stage in rice. Our results demonstrate that the integrated analysis of genome-wide miRNA profiling with QTL mapping can facilitate identification of miRNAs and their target genes associated with the target traits and the limited candidates identified in this study offer an important source for further functional analysis and molecular breeding for heat tolerance in rice.

Siu-Hong Chan,  Xinbin Dai,  Patrick Xuechun Zhao (2011)
Plant endogenous non-coding short small RNAs (20–24 nt), including microRNAs (miRNAs) and a subset of small interfering RNAs (ta-siRNAs), play important role in gene expression regulatory networks (GRNs). For example, many transcription factors and development-related genes have been reported as targets of these regulatory small RNAs. Although a number of miRNA target prediction algorithms and programs have been developed, most of them were designed for animal miRNAs which are significantly different from plant miRNAs in the target recognition process. These differences demand the development of separate plant miRNA (and ta-siRNA) target analysis tool(s). We present psRNATarget, a plant small RNA target analysis server, which features two important analysis functions: (i) reverse complementary matching between small RNA and target transcript using a proven scoring schema, and (ii) target-site accessibility evaluation by calculating unpaired energy (UPE) required to ‘open’ secondary structure around small RNA’s target site on mRNA. The psRNATarget incorporates recent discoveries in plant miRNA target recognition, e.g. it distinguishes translational and post-transcriptional inhibition, and it reports the number of small RNA/target site pairs that may affect small RNA binding activity to target transcript. The psRNATarget server is designed for high-throughput analysis of next-generation data with an efficient distributed computing back-end pipeline that runs on a Linux cluster. The server front-end integrates three simplified user-friendly interfaces to accept user-submitted or preloaded small RNAs and transcript sequences; and outputs a comprehensive list of small RNA/target pairs along with the online tools for batch downloading, key word searching and results sorting. The psRNATarget server is freely available at http://plantgrn.noble.org/psRNATarget/.

Novel and stress-regulated microRNAs and other small RNAs from Arabidopsis.

Ramanjulu Sunkar,  Jian Zhu (2004)
MicroRNAs (miRNAs) and short interfering RNAs (siRNAs) are small noncoding RNAs that have recently emerged as important regulators of mRNA degradation, translational repression, and chromatin modification. In Arabidopsis thaliana, 43 miRNAs comprising 15 families have been reported thus far. In an attempt to identify novel and abiotic stress regulated miRNAs and siRNAs, we constructed a library of small RNAs from Arabidopsis seedlings exposed to dehydration, salinity, or cold stress or to the plant stress hormone abscisic acid. Sequencing of the library and subsequent analysis revealed 26 new miRNAs from 34 loci, forming 15 new families. Two of the new miRNAs from three loci are members of previously reported miR171 and miR319 families. Some of the miRNAs are preferentially expressed in specific tissues, and several are either upregulated or downregulated by abiotic stresses. Ten of the miRNAs are highly conserved in other plant species. Fifty-one potential targets with diverse function were predicted for the newly identified miRNAs based on sequence complementarity. In addition to miRNAs, we identified 102 other novel endogenous small RNAs in Arabidopsis. These findings suggest that a large number of miRNAs and other small regulatory RNAs are encoded by the Arabidopsis genome and that some of them may play important roles in plant responses to environmental stresses as well as in development and genome maintenance.

S PENG,  J. Huang,  J. E. Sheehy … (2004)
The impact of projected global warming on crop yields has been evaluated by indirect methods using simulation models. Direct studies on the effects of observed climate change on crop growth and yield could provide more accurate information for assessing the impact of climate change on crop production. We analyzed weather data at the International Rice Research Institute Farm from 1979 to 2003 to examine temperature trends and the relationship between rice yield and temperature by using data from irrigated field experiments conducted at the International Rice Research Institute Farm from 1992 to 2003. Here we report that annual mean maximum and minimum temperatures have increased by 0.35 degrees C and 1.13 degrees C, respectively, for the period 1979-2003 and a close linkage between rice grain yield and mean minimum temperature during the dry cropping season (January to April). Grain yield declined by 10% for each 1 degrees C increase in growing-season minimum temperature in the dry season, whereas the effect of maximum temperature on crop yield was insignificant. This report provides a direct evidence of decreased rice yields from increased nighttime temperature associated with global warming.

This article was submitted to Plant Abiotic Stress, a section of the journal Frontiers in Plant Science