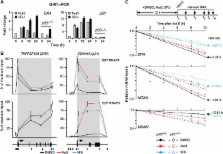 The cellular response to p53 activation varies greatly in a stimulus- and cell type-specific manner. Dissecting the molecular mechanisms defining these cell fate choices will assist the development of effective p53-based cancer therapies and also illuminate fundamental processes by which gene networks control cellular behaviour. Using an experimental system wherein stimulus-specific p53 responses are elicited by non-genotoxic versus genotoxic agents, we discovered a novel mechanism that determines whether cells undergo proliferation arrest or cell death. Strikingly, we observe that key mediators of cell-cycle arrest (p21, 14-3-3σ) and apoptosis (PUMA, BAX) are equally activated regardless of outcome. In fact, arresting cells display strong translocation of PUMA and BAX to the mitochondria, yet fail to release cytochrome C or activate caspases. Surprisingly, the key differential events in apoptotic cells are p53-dependent activation of the DR4 death receptor pathway, caspase 8-mediated cleavage of BID, and BID-dependent activation of poised BAX at the mitochondria. These results reveal a previously unappreciated role for DR4 and the extrinsic apoptotic pathway in cell fate choice following p53 activation.

Daniel Parsons,  Phillip Levy,  Ronald J. Trent … (1993)
The ability of p53 to activate transcription from specific sequences suggests that genes induced by p53 may mediate its biological role as a tumor suppressor. Using a subtractive hybridization approach, we identified a gene, named WAF1, whose induction was associated with wild-type but not mutant p53 gene expression in a human brain tumor cell line. The WAF1 gene was localized to chromosome 6p21.2, and its sequence, structure, and activation by p53 was conserved in rodents. Introduction of WAF1 cDNA suppressed the growth of human brain, lung, and colon tumor cells in culture. Using a yeast enhancer trap, a p53-binding site was identified 2.4 kb upstream of WAF1 coding sequences. The WAF1 promoter, including this p53-binding site, conferred p53-dependent inducibility upon a heterologous reporter gene. These studies define a gene whose expression is directly induced by p53 and that could be an important mediator of p53-dependent tumor growth suppression.

In vivo activation of the p53 pathway by small-molecule antagonists of MDM2.

Christian Klein,  Christine Lukacs,  F J Podlaski … (2004)
MDM2 binds the p53 tumor suppressor protein with high affinity and negatively modulates its transcriptional activity and stability. Overexpression of MDM2, found in many human tumors, effectively impairs p53 function. Inhibition of MDM2-p53 interaction can stabilize p53 and may offer a novel strategy for cancer therapy. Here, we identify potent and selective small-molecule antagonists of MDM2 and confirm their mode of action through the crystal structures of complexes. These compounds bind MDM2 in the p53-binding pocket and activate the p53 pathway in cancer cells, leading to cell cycle arrest, apoptosis, and growth inhibition of human tumor xenografts in nude mice.

Blinded by the Light: The Growing Complexity of p53.

Karen H. Vousden,  Carol Prives (2009)
While the tumor suppressor functions of p53 have long been recognized, the contribution of p53 to numerous other aspects of disease and normal life is only now being appreciated. This burgeoning range of responses to p53 is reflected by an increasing variety of mechanisms through which p53 can function, although the ability to activate transcription remains key to p53's modus operandi. Control of p53's transcriptional activity is crucial for determining which p53 response is activated, a decision we must understand if we are to exploit efficiently the next generation of drugs that selectively activate or inhibit p53.