Patient perception of pain care in hospitals in the United States 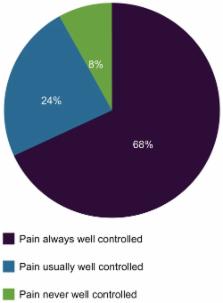 Assessment of patients’ perception of pain control in hospitals in the United States.

Limited data are available regarding the quality of pain care in the hospitalized patient. This is particularly valid for data that allow for comparison of pain outcomes from one hospital to another. Such data are critical for numerous reasons, including allowing patients and policy-makers to make data-driven decisions, and to guide hospitals in their efforts to improve pain care. The Hospital Quality Alliance was recently created by federal policy makers and private organizations in conjunction with the Centers for Medicare and Medicare Services to conduct patient surveys to evaluate their experience including pain control during their hospitalization.

In March 2008, the results of the Hospital Consumer Assessment of Healthcare Providers and Systems (HCAHPS) survey was released for review for health care providers and researchers. This survey includes a battery of questions for patients upon discharge from the hospital including pain-related questions and patient satisfaction that provide valuable data regarding pain care nationwide. This study will review the results from the pain questions from this available data set and evaluate the performance of these hospitals in pain care in relationship to patient satisfaction. Furthermore, this analysis will be providing valuable information on how hospital size, geographic location and practice setting may play a role in pain care in US hospitals.

The data indicates that 63% of patients gave a high rating of global satisfaction for their care, and that an additional 26% of patients felt that they had a moderate level of global satisfaction with the global quality of their care. When correlated to satisfaction with pain control, the relationship with global satisfaction and “always” receiving good pain control was highly correlated (r >0.84). In respect to the other HCAHPS components, we found that the patient and health care staff relationship with the patient is also highly correlated with pain relief (r >0.85). The patients’ reported level of pain relief was significantly different based upon hospital ownership, with government owned hospitals receiving the highest pain relief, followed by nonprofit hospitals, and lastly proprietary hospitals. Hospital care acuity also had an impact on the patient’s perception of their pain care; patients cared for in acute care hospitals had lower levels of satisfaction than critical access hospitals.

The results of this study are a representation of the experiences of patients in US hospitals with regard to pain care specifically and the need for improved methods of treating and evaluating pain care. This study provides the evidence needed for hospitals to make pain care a priority in to achieve patient satisfaction throughout the duration of their hospitalization. Furthermore, future research should be developed to make strategies for institutions and policy-makers to improve and optimize patient satisfaction with pain care.

A Sandler,  M. Jackson,  P B Kavanagh … (1996)
Long-term pain is a common sequela of thoracotomy, occurring in approximately 50% of patients 2 years after thoracic surgery. Despite this alarming statistic, little is known about the factors responsible for the transition of acute to chronic pain. The aim of the present study is to identify predictors of long-term post-thoracotomy pain. Follow-up was for 1.5 years for patients who had participated in a prospective, randomized, controlled trial of preemptive, multimodal analgesia. Subjects were recruited from a tertiary care center. Thirty patients who had undergone lateral thoracotomy were followed up by telephone, administered a structured interview, and classified according to long-term pain status. Present pain status was measured by a verbal rating scale (VAS). Measures obtained within the first 48 h after surgery were compared between patients with and without pain 1.5 years later. These include VAS pain scores at rest and after movement, McGill Pain Questionnaire data, patient-controlled morphine consumption (mg), and pain thresholds to pressure applied to a rib contralateral to the thoracotomy incision. Fifty-two percent of patients reported long-term pain. Early postoperative pain was the only factor that significantly predicted long-term pain. Pain intensity 24 h after surgery, at rest, and after movement was significantly greater among patients who developed long-term pain compared with pain-free patients. A significant predictive relationship was also found at 24 and 48 h using the McGill Pain Questionnaire. Cumulative morphine was comparable for the two groups. Pain thresholds to pressure applied to a rib contralateral to the incision did not differ significantly between the groups. Aggressive management of early postoperative pain may reduce the likelihood of long-term post-thoracotomy pain.

M. Jha,  Adrian Epstein,  Zhonghe Li … (2005)
The Hospital Quality Alliance (HQA) is the first initiative that routinely reports data on hospitals' performance nationally. Heretofore, such data have been unavailable. We used data collected by the Centers for Medicare and Medicaid Services on 10 indicators of the quality of care for acute myocardial infarction, congestive heart failure, and pneumonia. The main outcome measures were hospitals' performance with respect to each indicator and summary scores for each clinical condition. Predictors of a high level of performance were determined with the use of multivariable linear regression. A total of 3558 hospitals reported data on at least one stable measure (defined as information obtained from discharge data from at least 25 patients) during the first half of 2004. Median performance scores (expressed as the percentage of patients who satisfied the criterion) were at least 90 percent for 5 of the 10 measures but lower for the other 5. Performance varied moderately among large hospital-referral regions, with the top-ranked regions scoring 12 percentage points (for acute myocardial infarction) to 23 percentage points (for pneumonia) higher than the bottom-ranked regions. A high quality of care for acute myocardial infarction predicted a high quality of care for congestive heart failure but was only marginally better than chance at predicting a high quality of care for pneumonia. Characteristics associated with small but significant increases in performance included being an academic hospital, being in the Northeast or Midwest, and being a not-for-profit hospital. Analysis of data from the new HQA national reporting system shows that performance varies among hospitals and across indicators. Given this variation and small differences based on hospitals' characteristics, performance reporting will probably need to include numerous clinical conditions from a broad range of hospitals.

Measuring hospital care from the patients' perspective: an overview of the CAHPS Hospital Survey development process.

Cynthia M Farquhar,  Charles Darby,  Steven Garfinkel … (2005)
To describe the developmental process for the CAHPS Hospital Survey. A pilot was conducted in three states with 19,720 hospital discharges. A rigorous, multi-step process was used to develop the CAHPS Hospital Survey. It included a public call for measures, multiple Federal Register notices soliciting public input, a review of the relevant literature, meetings with hospitals, consumers and survey vendors, cognitive interviews with consumer, a large-scale pilot test in three states and consumer testing and numerous small-scale field tests. The current version of the CAHPS Hospital Survey has survey items in seven domains, two overall ratings of the hospital and five items used for adjusting for the mix of patients across hospitals and for analytical purposes. The CAHPS Hospital Survey is a core set of questions that can be administered as a stand-alone questionnaire or combined with a broader set of hospital specific items.