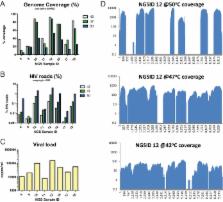 As the epidemiological epicenter of the human immunodeficiency virus (HIV) pandemic, the Democratic Republic of the Congo (DRC) is a reservoir of circulating HIV strains exhibiting high levels of diversity and recombination. In this study, we characterized HIV specimens collected in two rural areas of the DRC between 2001 and 2003 to identify rare strains of HIV. The env gp41 region was sequenced and characterized for 172 HIV-positive specimens. The env sequences were predominantly subtype A (43.02%), but 7 other subtypes (33.14%), 20 circulating recombinant forms (CRFs; 11.63%), and 20 unclassified (11.63%) sequences were also found. Of the rare and unclassified subtypes, 18 specimens were selected for next-generation sequencing (NGS) by a modified HIV-switching mechanism at the 5′ end of the RNA template (SMART) method to obtain full-genome sequences. NGS produced 14 new complete genomes, which included pure subtype C ( n = 2), D ( n = 1), F1 ( n = 1), H ( n = 3), and J ( n = 1) genomes. The two subtype C genomes and one of the subtype H genomes branched basal to their respective subtype branches but had no evidence of recombination. The remaining 6 genomes were complex recombinants of 2 or more subtypes, including subtypes A1, F, G, H, J, and K and unclassified fragments, including one subtype CRF25 isolate, which branched basal to all CRF25 references. Notably, all recombinant subtype H fragments branched basal to the H clade. Spatial-geographical analysis indicated that the diverse sequences identified here did not expand globally. The full-genome and subgenomic sequences identified in our study population significantly increase the documented diversity of the strains involved in the continually evolving HIV-1 pandemic.

IMPORTANCE Very little is known about the ancestral HIV-1 strains that founded the global pandemic, and very few complete genome sequences are available from patients in the Congo Basin, where HIV-1 expanded early in the global pandemic. By sequencing a subgenomic fragment of the HIV-1 envelope from study participants in the DRC, we identified rare variants for complete genome sequencing. The basal branching of some of the complete genome sequences that we recovered suggests that these strains are more closely related to ancestral HIV-1 strains than to previously reported strains and is evidence that the local diversification of HIV in the DRC continues to outpace the diversity of global strains decades after the emergence of the pandemic.

Confidence Limits on Phylogenies: An Approach Using the Bootstrap

R Ingersoll,  Patrick W. Sheppard,  H Sheppard … (1998)
The development of an effective human immunodeficiency virus type 1 (HIV-1) vaccine is likely to depend on knowledge of circulating variants of genes other than the commonly sequenced gag and env genes. In addition, full-genome data are particularly limited for HIV-1 subtype C, currently the most commonly transmitted subtype in India and worldwide. Likewise, little is known about sequence variation of HIV-1 in India, the country facing the largest burden of HIV worldwide. Therefore, the objective of this study was to clone and characterize the complete genome of HIV-1 from seroconverters infected with subtype C variants in India. Cocultured HIV-1 isolates were obtained from six seroincident individuals from Pune, India, and virtually full-length HIV-1 genomes were amplified, cloned, and sequenced from each. Sequence analysis revealed that five of the six genomes were of subtype C, while one was a mosaic of subtypes A and C, with multiple breakpoints in env, nef, and the 3' long terminal repeat as determined by both maximal chi2 analysis and phylogenetic bootstrapping. Sequences were compared for preservation of known cytotoxic T lymphocyte (CTL) epitopes. Compared with those of the HIV-1LAI sequence, 38% of well-defined CTL epitopes were identical. The proportion of nonconservative substitutions for Env, at 61%, was higher (P < 0.001) than those for Gag (24%), Pol (18%), and Nef (32%). Therefore, characterized CTL epitopes demonstrated substantial differences from subtype B laboratory strains, which were most pronounced in Env. Because these clones were obtained from Indian seroconverters, they are likely to facilitate vaccine-related efforts in India by providing potential antigens for vaccine candidates as well as for assays of vaccine responsiveness.