Oxidative stress and DNA damage in patients with migraine 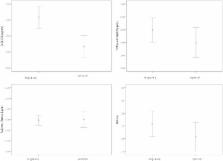 Journal: The Journal of Headache and Pain

In this study, total oxidant status (TOS); total antioxidant status (TAS); oxidative stress index (OSI); and 8-hydroxy-2′-deoxyguanosine (8-OHdG), which is an indicator of oxidative DNA damage, were measured in the plasma samples of 50 prophylactic unmediated migraineurs (11 with aura and 39 without aura) and 30 matched healthy volunteers.

No significant differences in TAS, TOS, and OSI values were observed between patients and controls. However, plasma 8-OHdG levels were found to be significantly higher in migraine patients than in the control group ( p = 0.001); this increase in plasma 8-OHdG levels was more prominent in cases with migraine without aura than with aura ( p = 0.001). Our results suggested an evidence of oxidative stress-related DNA damage in migraine.

DNA damage reflected by plasma 8-OHdG did not studied in migraine before. Therefore, further research on oxidative stress-related DNA damage and the extent of its clinical manifestations in migraine may provide additional data to our current knowledge.

Peramaiyan Rajendran,  Uppalapati Lakshminarasaiah,  Natarajan Nandakumar … (2014)
Oxidative stress plays a pivotal role in the development of human diseases. Reactive oxygen species (ROS) that includes hydrogen peroxide, hyphochlorus acid, superoxide anion, singlet oxygen, lipid peroxides, hypochlorite and hydroxyl radical are involved in growth, differentiation, progression and death of the cell. They can react with membrane lipids, nucleic acids, proteins, enzymes and other small molecules. Low concentrations of ROS has an indispensable role in intracellular signalling and defence against pathogens, while, higher amounts of ROS play a role in number of human diseases, including arthritis, cancer, diabetes, atherosclerosis, ischemia, failures in immunity and endocrine functions. Antioxidants presumably act as safeguard against the accumulation of ROS and their elimination from the system. The aim of this review is to highlight advances in understanding of the ROS and also to summarize the detailed impact and involvement of antioxidants in selected human diseases. Copyright © 2014 Elsevier B.V. All rights reserved.

The TRPA1 channel in migraine mechanism and treatment.

S Benemei,  C Fusi,  Gabriela Trevisan … (2014)
Migraine remains an elusive and poorly understood disease. The uncertainty is reflected by the currently unsatisfactory acute and prophylactic treatments for this disease. Genetic and pharmacological information points to the involvement of some transient receptor potential (TRP) channels in pain mechanisms. In particular, the TRP vanilloid 1 (TRPV1) and TRP ankyrin 1 (TRPA1) channels seem to play a major role in different models of pain diseases. Recent findings have underscored the possibility that TRP channels expressed in the nerve terminals of peptidergic nociceptors contribute to the migraine mechanism. Among this channel subset, TRPA1, a sensor of oxidative, nitrative and electrophilic stress, is activated by an unprecedented series of irritant and pain-provoking exogenous and endogenous agents, which release the pro-migraine peptide, calcitonin gene-related peptide, through this neuronal pathway. Some of the recently identified TRPA1 activators have long been known as migraine triggers. Furthermore, specific analgesic and antimigraine medicines have been shown to inhibit or desensitize TRPA1 channels. Thus, TRPA1 is emerging as a major contributing pathway in migraine and as a novel target for the development of drugs for pain and migraine treatment.

Charles H. Wellman,  Richard J. Bloomer (2008)
Sex and lifestyle factors are known to influence the oxidation of protein, lipids, and DNA. Biomarkers such as protein carbonyls (PC), malondialdehyde (MDA), and 8-hydroxydeoxyguanosine (8-OHdG) have been commonly used in an attempt to characterize the oxidative status of human subjects. This study compared resting blood oxidative stress biomarkers, in relation to exercise training status and dietary intake, between men and women. Exercise-trained and sedentary men and women (with normal menstrual cycles; reporting during the early follicular phase) were recruited from the University of Memphis, Tennessee, campus and surrounding community via recruitment flyers and word of mouth. Participants were categorized by sex and current exercise training status (ie, trained or untrained). Each completed a detailed 5-day food record of all food and drink consumed. Diets were analyzed for kilocalories and macro- and micronutrient (vitamins C, E, A) intake. Venous blood samples were obtained at rest and analyzed for PC, MDA, and 8-OHdG. In the 131 participants (89 men, of whom 74 were exercise trained and 15 untrained, and 42 women, of whom 22 were exercise trained and 20 untrained; mean [SD] age, 24 [4] years), PC did not differ significantly between trained men and women or between untrained men and women. However, trained participants had significantly lower plasma PC (measured in nmol . mg protein(-1)) (mean [SEM] 0.0966 [0.0055]) than did untrained participants (0.1036 [0.0098]) (P < 0.05). MDA levels (measured in micromol . L(-1)) were significantly lower in trained women (0.4264 [0.0559]) compared with trained men (0.6959 [0.0593]); in trained men and women combined (0.5621 [0.0566]) compared with untrained men and women combined (0.7397 [0.0718]); and in women combined (0.5665 [0.0611]) compared with men combined (0.7338 [0.0789]) (P < 0.05 for all comparisons). No significant differences were noted between any groups for 8-OHdG. Neither PC nor 8-OHdG were correlated to any dietary variable, with the exception of PC and percent of protein in untrained men (r = 0.552; P = 0.033). MDA was positively correlated to protein intake and negatively correlated to percent of carbohydrate and vitamin C intake, primarily in trained men (P < or = 0.03). In this sample of young healthy adults, oxidative stress was lower in women than in men and in trained compared with untrained individuals, particularly regarding MDA. With the exception of MDA primarily in trained men, dietary intake did not appear to be correlated to biomarkers of oxidative stress.