The prevalence of women’s emotional and physical health problems following a postpartum haemorrhage: a systematic review 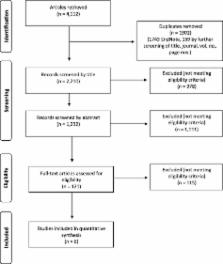 Postpartum Haemorrhage (PPH) is a leading cause of maternal mortality with approximately 225 women dying as a result of it each day especially in low income countries. However, much less is known about morbidity after a PPH. This systematic review aimed to determine the overall prevalence of emotional and physical health problems experienced by women following a postpartum haemorrhage.

Eight databases were searched for published non-randomised, observational, including cohort, primary research studies that reported on the prevalence of emotional and/or physical health problems following a PPH. Intervention studies were included and data, if available, were abstracted on the control group. All authors independently screened the papers for inclusion. Of the 2210 papers retrieved, six met the inclusion criteria. Data were extracted independently by two authors. The methodological quality of the included studies was assessed using a modified Newcastle Ottawa Scale (NOS). The primary outcome measure reported was emotional and physical health problems up to 12 months postpartum following a postpartum haemorrhage.

Two thousand two hundred ten citations were identified and screened with 2089 excluded by title and abstract. Following full-text review of 121 papers, 115 were excluded. The remaining 6 studies were included. All included studies were judged as having strong or moderate methodological quality. Five studies had the sequelae of PPH as their primary focus, and one study focused on morbidity postnatally, from which we could extract data on PPH. Persistent morbidities following PPH (at ≥ 3 and < 6 months postpartum) included postnatal depression (13 %), post-traumatic stress disorder (3 %), and health status ‘much worse than one year ago’ (6 %). Due to the different types of health outcomes reported in the individual studies, it was possible to pool results from only four studies, and only then by accepting the slightly differing definitions of PPH. Those that could be pooled reported rates of acute renal failure (0.33 %), coagulopathy (1.74 %) and re-admission to hospital following a PPH between 1 and 3 months postpartum (3.6 %), an appreciable indication of underlying physical problems.

This systematic review demonstrates that the existence and type of physical and emotional health problems post PPH, regardless of the volume of blood lost, are largely unknown. Further large cohort or case control studies are necessary to obtain better knowledge of the sequelae of this debilitating morbidity.

The epidemiology of postpartum hemorrhage in a large, nationwide sample of deliveries.

Brian Bateman,  Julia Riley,  Robert F Berman … (2010)
In this study, we sought to (1) define trends in the incidence of postpartum hemorrhage (PPH), and (2) elucidate the contemporary epidemiology of PPH focusing on risk factors and maternal outcomes related to this delivery complication. Hospital admissions for delivery were extracted from the Nationwide Inpatient Sample, the largest discharge dataset in the United States. Using International Classification of Diseases, Clinical Modification (ninth revision) codes, deliveries complicated by PPH were identified, as were comorbid conditions that may be risk factors for PPH. Temporal trends in the incidence of PPH from 1995 to 2004 were assessed. Logistic regression was used to identify risk factors for the most common etiology of PPH-uterine atony. In 2004, PPH complicated 2.9% of all deliveries; uterine atony accounted for 79% of the cases of PPH. PPH was associated with 19.1% of all in-hospital deaths after delivery. The overall rate of PPH increased 27.5% from 1995 to 2004, primarily because of an increase in the incidence of uterine atony; the rates of PPH from other causes including retained placenta and coagulopathy remained relatively stable during the study period. Logistic regression modeling identified age or =40 years, cesarean delivery, hypertensive diseases of pregnancy, polyhydramnios, chorioamnionitis, multiple gestation, retained placenta, and antepartum hemorrhage as independent risk factors for PPH from uterine atony that resulted in transfusion. Excluding maternal age and cesarean delivery, one or more of these risk factors were present in only 38.8% of these patients. PPH is a relatively common complication of delivery and is associated with substantial maternal morbidity and mortality. It is increasing in frequency in the United States. PPH caused by uterine atony resulting in transfusion often occurs in the absence of recognized risk factors.

Michael A. Belfort,  B. L. Clark,  Gary Dildy … (2008)
The objective of the study was to compare visually estimated blood loss (vEBL) with calculated estimated blood loss (cEBL) according to mode of delivery and degree of perineal laceration. Pre- and postdelivery hematocrit (HCT) and other variables including vEBL were prospectively recorded into an obstetrical database between January and September 2005. The cEBL was derived by multiplying the calculated pregnancy blood volume (0.75 x {[maternal height (inches) x 50] + [maternal weight in pounds x 25]}) by percent of blood volume lost ({predelivery HCT - postdelivery HCT}/predelivery HCT). cEBL and vEBL were compared according to mode of delivery and degree of perineal laceration. There were 677 subjects with complete data. vEBL was statistically different from cEBL between each degree of laceration and between all modes of delivery, demonstrating an underestimation of vEBL with increasing cEBL. Improved methods for calculating blood loss include the use of a modified version of the formula used for pregnancy blood volume calculation.