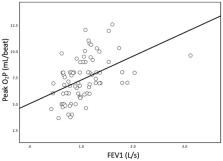 Patients with chronic obstructive pulmonary disease (COPD) are at an increased risk of cardiovascular comorbidities such as pulmonary hypertension or heart failure. Impaired cardiovascular function often has a significant impact on patients with COPD. Oxygen pulse (O 2P) is a surrogate for stroke volume. However, studies regarding O 2P, health-related quality of life (HRQL), and exercise capacity in patients with COPD are lacking. We aimed to confirm the association between O 2P, HRQL, exercise capacity, severe exacerbation of COPD, and other parameters in exercise testing.

Peak O 2P has a significant impact on exercise capacity, HRQL, dyspnea, COPD-related hospitalization, and circulatory and ventilatory functions in patients with COPD. The AT and FEV1 have strong and moderate associations with peak O 2P, respectively. Therefore, peak O 2P is an important indicator of disease severity for patients with COPD.

David C. Hogg,  Wim Timens (2008)
The pathogenesis of chronic obstructive pulmonary disease (COPD) is based on the innate and adaptive inflammatory immune response to the inhalation of toxic particles and gases. Although tobacco smoking is the primary cause of this inhalation injury, many other environmental and occupational exposures contribute to the pathology of COPD. The immune inflammatory changes associated with COPD are linked to a tissue-repair and -remodeling process that increases mucus production and causes emphysematous destruction of the gas-exchanging surface of the lung. The common form of emphysema observed in smokers begins in the respiratory bronchioles near the thickened and narrowed small bronchioles that become the major site of obstruction in COPD. The mechanism(s) that allow small airways to thicken in such close proximity to lung tissue undergoing emphysematous destruction remains a puzzle that needs to be solved.

Nathaniel M Hawkins,  Sean Virani,  Claudio Ceconi (2013)
Pulmonary disease is common in patients with heart failure, through shared risk factors and pathophysiological mechanisms. Adverse pulmonary vascular remodelling and chronic systemic inflammation characterize both diseases. Concurrent chronic obstructive pulmonary disease presents diagnostic and therapeutic challenges, and is associated with increased morbidity and mortality. The cornerstones of therapy are beta-blockers and beta-agonists, whose pharmacological properties are diametrically opposed. Each disease is implicated in exacerbations of the other condition, greatly increasing hospitalizations and associated health care costs. Such multimorbidity is a key challenge for health-care systems oriented towards the treatment of individual diseases. Early identification and treatment of cardiopulmonary disease may alleviate this burden. However, diagnostic and therapeutic strategies require further validation in patients with both conditions.

Jason K. Wasserman,  Robin Hansen,  Brett W. Stringer (1997)
Because gas-exchange measurements during cardiopulmonary exercise testing allow noninvasive measurement of oxygen uptake (Vo2), which is equal to cardiac output (CO) x arteriovenous oxygen content difference [C(a-vDo2),] CO and stroke volume could theoretically be estimated if the C(a-vDo2) increased in a predictable fashion as a function of % maximum Vo2 (Vo2max) during exercise. To investigate the behavior of C(a-vDo2) during progressively increasing ramp pattern cycle ergometry exercise, 5 healthy subjects performed 10 studies to exhaustion while arterial and mixed venous blood were sampled. Samples were analyzed for blood gases (pH, Pco2, Po2) and oxyhemoglobin and hemoglobin concentration with a CO-oximeter. The C(a-vDo2) (ml/100 ml) could be estimated with a linear regression [C(a-vDo2) = 5.72 + 0.105 x % Vo2max; r = 0.94]. The CO estimated from the C(a-vDo2) by using the above linear regression was well correlated with the CO determined by the direct Fick method (r = 0.96). The coefficient of variation of the estimated CO was small (7-9%) between the lactic acidosis threshold and peak Vo2. The behavior of C(a-vDo2), as related to peak Vo2, was similar regardless of cardiac function compared with similar measurements from studies in the literature performed in normal and congestive heart failure patients. In summary, CO and stroke volume can be estimated during progressive work rate exercise testing from measured Vo2 (in normal subjects and patients with congestive heart failure), and the resultant linear regression equation provides a good estimate of C(a-vDo2).