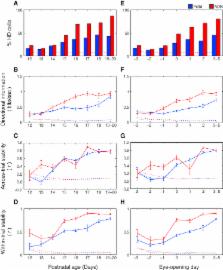 Head direction (HD) cells are neurons found in the hippocampal formation and connected areas that fire as a function of an animal’s directional orientation relative to its environment [ 1, 2]. They integrate self-motion and environmental sensory information to update directional heading [ 3]. Visual landmarks, in particular, exert strong control over the preferred direction of HD cell firing [ 4]. The HD signal has previously been shown to appear adult-like as early as postnatal day 16 (P16) in the rat pup, just after eye opening and coinciding with the first spontaneous exploration of its environment [ 5, 6]. In order to determine whether the HD circuit can begin its organization prior to the onset of patterned vision, we recorded from the anterodorsal thalamic nucleus (ADN) and its postsynaptic target in the hippocampal formation, the dorsal pre-subiculum (PrSd), before and after eye opening in pre-weanling rats. We find that HD cells can be recorded at the earliest age sampled (P12), several days before eye opening. However, this early HD signal displays low directional information content and lacks stability both within and across trials. Following eye opening, the HD system matures rapidly, as more cells exhibit directional firing, and the quality and reliability of the directional signal improves dramatically. Cue-rotation experiments show that a prominent visual landmark is able to control HD responses within 24 hr of eye opening. Together, the results suggest that the directional network can be organized independently of visual spatial information while demonstrating the importance of patterned vision for accurate and reliable orientation in space.

Tan et al. reveal the existence of head direction (HD) cells several days before eye opening in the rat pup, suggesting that the HD cell network can be organized independently of patterned vision. The stability and directional tuning of HD cells improve sharply at eye opening, demonstrating the importance of vision for accurate navigation.

Head-direction cells recorded from the postsubiculum in freely moving rats. I. Description and quantitative analysis.

Accuracy of tetrode spike separation as determined by simultaneous intracellular and extracellular measurements.

D Henze,  G Buzsáki,  H Hirase … (2000)
Simultaneous recording from large numbers of neurons is a prerequisite for understanding their cooperative behavior. Various recording techniques and spike separation methods are being used toward this goal. However, the error rates involved in spike separation have not yet been quantified. We studied the separation reliability of "tetrode" (4-wire electrode)-recorded spikes by monitoring simultaneously from the same cell intracellularly with a glass pipette and extracellularly with a tetrode. With manual spike sorting, we found a trade-off between Type I and Type II errors, with errors typically ranging from 0 to 30% depending on the amplitude and firing pattern of the cell, the similarity of the waveshapes of neighboring neurons, and the experience of the operator. Performance using only a single wire was markedly lower, indicating the advantages of multiple-site monitoring techniques over single-wire recordings. For tetrode recordings, error rates were increased by burst activity and during periods of cellular synchrony. The lowest possible separation error rates were estimated by a search for the best ellipsoidal cluster shape. Human operator performance was significantly below the estimated optimum. Investigation of error distributions indicated that suboptimal performance was caused by inability of the operators to mark cluster boundaries accurately in a high-dimensional feature space. We therefore hypothesized that automatic spike-sorting algorithms have the potential to significantly lower error rates. Implementation of a semi-automatic classification system confirms this suggestion, reducing errors close to the estimated optimum, in the range 0-8%.

Jeffrey S. Taube (2006)
Navigation first requires accurate perception of one's spatial orientation within the environment, which consists of knowledge about location and directional heading. Cells within several limbic system areas of the mammalian brain discharge allocentrically as a function of the animal's directional heading, independent of the animal's location and ongoing behavior. These cells are referred to as head direction (HD) cells and are believed to encode the animal's perceived directional heading with respect to its environment. Although HD cells are found in several areas, the principal circuit for generating this signal originates in the dorsal tegmental nucleus and projects serially, with some reciprocal connections, to the lateral mammillary nucleus --> anterodorsal thalamus --> PoS, and terminates in the entorhinal cortex. HD cells receive multimodal information about landmarks and self-generated movements. Vestibular information appears critical for generating the directional signal, but motor/proprioceptive and landmark information are important for updating it.