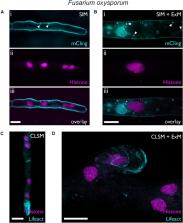 Super-resolution microscopy has evolved as a powerful method for subdiffraction-resolution fluorescence imaging of cells and cellular organelles, but requires sophisticated and expensive installations. Expansion microscopy (ExM), which is based on the physical expansion of the cellular structure of interest, provides a cheap alternative to bypass the diffraction limit and enable super-resolution imaging on a conventional fluorescence microscope. While ExM has shown impressive results for the magnified visualization of proteins and RNAs in cells and tissues, it has not yet been applied in fungi, mainly due to their complex cell wall. Here we developed a method that enables reliable isotropic expansion of ascomycetes and basidiomycetes upon treatment with cell wall degrading enzymes. Confocal laser scanning microscopy (CLSM) and structured illumination microscopy (SIM) images of 4.5-fold expanded sporidia of Ustilago maydis expressing fluorescent fungal rhodopsins and hyphae of Fusarium oxysporum or Aspergillus fumigatus expressing either histone H1-mCherry together with Lifeact-sGFP or mRFP targeted to mitochondria, revealed details of subcellular structures with an estimated spatial resolution of around 30 nm. ExM is thus well suited for cell biology studies in fungi on conventional fluorescence microscopes.

Teresa Klein,  Anna Löschberger,  Steve Wolter … (2011)
Direct stochastic optical reconstruction microscopy (dSTORM) uses conventional fluorescent probes such as labeled antibodies or chemical tags for subdiffraction resolution fluorescence imaging with a lateral resolution of ∼20 nm. In contrast to photoactivated localization microscopy (PALM) with photoactivatable fluorescent proteins, dSTORM experiments start with bright fluorescent samples in which the fluorophores have to be transferred to a stable and reversible OFF state. The OFF state has a lifetime in the range of 100 milliseconds to several seconds after irradiation with light intensities low enough to ensure minimal photodestruction. Either spontaneously or photoinduced on irradiation with a second laser wavelength, a sparse subset of fluorophores is reactivated and their positions are precisely determined. Repetitive activation, localization and deactivation allow a temporal separation of spatially unresolved structures in a reconstructed image. Here we present a step-by-step protocol for dSTORM imaging in fixed and living cells on a wide-field fluorescence microscope, with standard fluorescent probes focusing especially on the photoinduced fine adjustment of the ratio of fluorophores residing in the ON and OFF states. Furthermore, we discuss labeling strategies, acquisition parameters, and temporal and spatial resolution. The ultimate step of data acquisition and data processing can be performed in seconds to minutes.

Robert Lücking,  David L. Hawksworth (2017)
The question of how many species of Fungi there are has occasioned much speculation, with figures mostly posited from around half a million to 10 million, and in one extreme case even a sizable portion of the spectacular number of 1 trillion. Here we examine new evidence from various sources to derive an updated estimate of global fungal diversity. The rates and patterns in the description of new species from the 1750s show no sign of approaching an asymptote and even accelerated in the 2010s after the advent of molecular approaches to species delimitation. Species recognition studies of (semi-)cryptic species hidden in morpho-species complexes suggest a weighted average ratio of about an order of magnitude for the number of species recognized after and before such studies. New evidence also comes from extrapolations of plant:fungus ratios, with information now being generated from environmental sequence studies, including comparisons of molecular and fieldwork data from the same sites. We further draw attention to undescribed species awaiting discovery in biodiversity hot spots in the tropics, little-explored habitats (such as lichen-inhabiting fungi), and material in collections awaiting study. We conclude that the commonly cited estimate of 1.5 million species is conservative and that the actual range is properly estimated at 2.2 to 3.8 million. With 120,000 currently accepted species, it appears that at best just 8%, and in the worst case scenario just 3%, are named so far. Improved estimates hinge particularly on reliable statistical and phylogenetic approaches to analyze the rapidly increasing amount of environmental sequence data.

This article was submitted to Fungi and Their Interactions, a section of the journal Frontiers in Microbiology