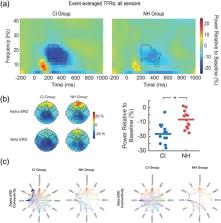 A common concern for individuals with severe‐to‐profound hearing loss fitted with cochlear implants (CIs) is difficulty following conversations in noisy environments. Recent work has suggested that these difficulties are related to individual differences in brain function, including verbal working memory and the degree of cross‐modal reorganization of auditory areas for visual processing. However, the neural basis for these relationships is not fully understood. Here, we investigated neural correlates of visual verbal working memory and sensory plasticity in 14 CI users and age‐matched normal‐hearing (NH) controls. While we recorded the high‐density electroencephalogram (EEG), participants completed a modified Sternberg visual working memory task where sets of letters and numbers were presented visually and then recalled at a later time. Results suggested that CI users had comparable behavioural working memory performance compared with NH. However, CI users had more pronounced neural activity during visual stimulus encoding, including stronger visual‐evoked activity in auditory and visual cortices, larger modulations of neural oscillations and increased frontotemporal connectivity. In contrast, during memory retention of the characters, CI users had descriptively weaker neural oscillations and significantly lower frontotemporal connectivity. We interpret the differences in neural correlates of visual stimulus processing in CI users through the lens of cross‐modal and intramodal plasticity.

People with hearing loss who have a cochlear implant (CI) have altered neural processing when engaged in a visual working memory task. During the visual stimulus encoding, CI users had greater visual and auditory cortex activation compared with normal‐hearing controls. Greater connectivity between temporal and frontal areas was observed for CI users compared with normal‐hearing controls. 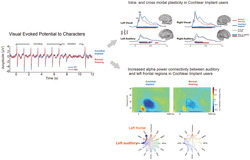 An automated labeling system for subdividing the human cerebral cortex on MRI scans into gyral based regions of interest.

Rahul Desikan, Florent Ségonne, Bruce Fischl … (2006)
In this study, we have assessed the validity and reliability of an automated labeling system that we have developed for subdividing the human cerebral cortex on magnetic resonance images into gyral based regions of interest (ROIs). Using a dataset of 40 MRI scans we manually identified 34 cortical ROIs in each of the individual hemispheres. This information was then encoded in the form of an atlas that was utilized to automatically label ROIs. To examine the validity, as well as the intra- and inter-rater reliability of the automated system, we used both intraclass correlation coefficients (ICC), and a new method known as mean distance maps, to assess the degree of mismatch between the manual and the automated sets of ROIs. When compared with the manual ROIs, the automated ROIs were highly accurate, with an average ICC of 0.835 across all of the ROIs, and a mean distance error of less than 1 mm. Intra- and inter-rater comparisons yielded little to no difference between the sets of ROIs. These findings suggest that the automated method we have developed for subdividing the human cerebral cortex into standard gyral-based neuroanatomical regions is both anatomically valid and reliable. This method may be useful for both morphometric and functional studies of the cerebral cortex as well as for clinical investigations aimed at tracking the evolution of disease-induced changes over time, including clinical trials in which MRI-based measures are used to examine response to treatment.