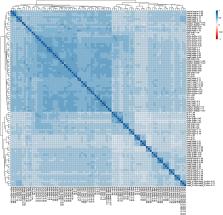 The novel coronavirus SARS-CoV-2, the causative agent of COVID-19 respiratory disease, has infected over 2.3 million people, killed over 160,000, and caused worldwide social and economic disruption 1, 2 . There are currently no antiviral drugs with proven clinical efficacy, nor are there vaccines for its prevention, and these efforts are hampered by limited knowledge of the molecular details of SARS-CoV-2 infection. To address this, we cloned, tagged and expressed 26 of the 29 SARS-CoV-2 proteins in human cells and identified the human proteins physically associated with each using affinity-purification mass spectrometry (AP-MS), identifying 332 high-confidence SARS-CoV-2-human protein-protein interactions (PPIs). Among these, we identify 66 druggable human proteins or host factors targeted by 69 compounds (29 FDA-approved drugs, 12 drugs in clinical trials, and 28 preclinical compounds). Screening a subset of these in multiple viral assays identified two sets of pharmacological agents that displayed antiviral activity: inhibitors of mRNA translation and predicted regulators of the Sigma1 and Sigma2 receptors. Further studies of these host factor targeting agents, including their combination with drugs that directly target viral enzymes, could lead to a therapeutic regimen to treat COVID-19.

[† ] Correspondence and requests for materials should be addressed to nevan.krogan@ 123456ucsf.edu