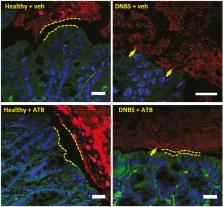 Significant alterations of intestinal microbiota and anemia are hallmarks of inflammatory bowel disease (IBD). It is widely accepted that iron is a key nutrient for pathogenic bacteria, but little is known about its impact on microbiota associated with IBD. We used a model device to grow human mucosa-associated microbiota in its physiological anaerobic biofilm phenotype. Compared to microbiota from healthy donors, microbiota from IBD patients generate biofilms ex vivo that were larger in size and cell numbers, contained higher intracellular iron concentrations, and exhibited heightened virulence in a model of human intestinal epithelia in vitro and in the nematode Caenorhabditis elegans. We also describe an unexpected iron-scavenging property for an experimental hydrogen sulfide-releasing derivative of mesalamine. The findings demonstrate that this new drug reduces the virulence of IBD microbiota biofilms through a direct reduction of microbial iron intake and without affecting bacteria survival or species composition within the microbiota. Metabolomic analyses indicate that this drug reduces the intake of purine nucleosides (guanosine), increases the secretion of metabolite markers of purine catabolism (urate and hypoxanthine), and reduces the secretion of uracil (a pyrimidine nucleobase) in complex multispecies human biofilms. These findings demonstrate a new pathogenic mechanism for dysbiotic microbiota in IBD and characterize a novel mode of action for a class of mesalamine derivatives. Together, these observations pave the way towards a new therapeutic strategy for treatment of patients with IBD.

The microbiome in inflammatory bowel disease: current status and the future ahead.

Aleksandar D. Kostic,  Ramnik Xavier,  Dirk Gevers (2014)
Studies of the roles of microbial communities in the development of inflammatory bowel disease (IBD) have reached an important milestone. A decade of genome-wide association studies and other genetic analyses have linked IBD with loci that implicate an aberrant immune response to the intestinal microbiota. More recently, profiling studies of the intestinal microbiome have associated the pathogenesis of IBD with characteristic shifts in the composition of the intestinal microbiota, reinforcing the view that IBD results from altered interactions between intestinal microbes and the mucosal immune system. Enhanced technologies can increase our understanding of the interactions between the host and its resident microbiota and their respective roles in IBD from both a large-scale pathway view and at the metabolic level. We review important microbiome studies of patients with IBD and describe what we have learned about the mechanisms of intestinal microbiota dysfunction. We describe the recent progress in microbiome research from exploratory 16S-based studies, reporting associations of specific organisms with a disease, to more recent studies that have taken a more nuanced view, addressing the function of the microbiota by metagenomic and metabolomic methods. Finally, we propose study designs and methodologies for future investigations of the microbiome in patients with inflammatory gut and autoimmune diseases in general. Copyright © 2014 AGA Institute. Published by Elsevier Inc. All rights reserved.

Spatial organization and composition of the mucosal flora in patients with inflammatory bowel disease.

Alexander Swidsinski,  Jutta Weber,  Vera Loening-Baucke … (2005)
The composition and spatial organization of the mucosal flora in biopsy specimens from patients with inflammatory bowel disease (IBD; either Crohn's disease or ulcerative colitis), self-limiting colitis, irritable-bowel syndrome (IBS), and healthy controls were investigated by using a broad range of fluorescent bacterial group-specific rRNA-targeted oligonucleotide probes. Each group included 20 subjects. Ten patients who had IBD and who were being treated with antibiotics were also studied. Use of nonaqueous Carnoy fixative to preserve the mucus layer was crucial for detection of bacteria adherent to the mucosal surface (mucosal bacteria). No biofilm was detectable in formalin-fixed biopsy specimens. Mucosal bacteria were found at concentrations greater than 10(9)/ml in 90 to 95% of IBD patients, 95% of patients with self-limiting colitis, 65% of IBS patients, and 35% of healthy controls. The mean density of the mucosal biofilm was 2 powers higher in IBD patients than in patients with IBS or controls, and bacteria were mostly adherent. Bacteroides fragilis was responsible for >60% of the biofilm mass in patients with IBD but for only 30% of the biofilm mass in patients with self-limiting colitis and 40% of the biofilm in IBS patients but for <15% of the biofilm in IBD patients. In patients treated with (5-ASA) or antibiotics, the biofilm could be detected with 4,6-diamidino-2-phenylindole but did not hybridize with fluorescence in situ hybridization probes. A Bacteroides fragilis biofilm is the main feature of IBD. This was not previously recognized due to a lack of appropriate tissue fixation. Both 5-ASA and antibiotics suppress but do not eliminate the adherent biofilm.

This article is published and distributed under the terms of the Oxford University Press, Standard Journals Publication Model ( https://academic.oup.com/journals/pages/about_us/legal/notices)