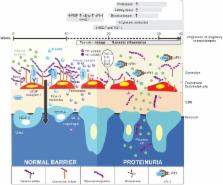 The polysaccharide heparan sulfate is ubiquitously expressed as a proteoglycan in extracellular matrices and on cell surfaces. In the glomerular filtration barrier, the action of the heparan sulfate is directly related to the function of glomerular filtration, mostly attributed to the sulfated domains that occur along the polysaccharide chain, as evidenced by fact that release of fragments of heparan sulfate by heparanase significantly increases the permeability of albumin passage through the glomerular endothelium, event that originates proteinuria. This review aims to show the importance of the structural domains of heparan sulfate in the process of selective permeability and to demonstrate how these domains may be altered during the glomerular inflammation processes that occur in preeclampsia.

Richard Levine,  Sharon E. Maynard,  Cong Qian … (2004)
The cause of preeclampsia remains unclear. Limited data suggest that excess circulating soluble fms-like tyrosine kinase 1 (sFlt-1), which binds placental growth factor (PlGF) and vascular endothelial growth factor (VEGF), may have a pathogenic role. We performed a nested case-control study within the Calcium for Preeclampsia Prevention trial, which involved healthy nulliparous women. Each woman with preeclampsia was matched to one normotensive control. A total of 120 pairs of women were randomly chosen. Serum concentrations of angiogenic factors (total sFlt-1, free PlGF, and free VEGF) were measured throughout pregnancy; there were a total of 655 serum specimens. The data were analyzed cross-sectionally within intervals of gestational age and according to the time before the onset of preeclampsia. During the last two months of pregnancy in the normotensive controls, the level of sFlt-1 increased and the level of PlGF decreased. These changes occurred earlier and were more pronounced in the women in whom preeclampsia later developed. The sFlt-1 level increased beginning approximately five weeks before the onset of preeclampsia. At the onset of clinical disease, the mean serum level in the women with preeclampsia was 4382 pg per milliliter, as compared with 1643 pg per milliliter in controls with fetuses of similar gestational age (P<0.001). The PlGF levels were significantly lower in the women who later had preeclampsia than in the controls beginning at 13 to 16 weeks of gestation (mean, 90 pg per milliliter vs. 142 pg per milliliter, P=0.01), with the greatest difference occurring during the weeks before the onset of preeclampsia, coincident with the increase in the sFlt-1 level. Alterations in the levels of sFlt-1 and free PlGF were greater in women with an earlier onset of preeclampsia and in women in whom preeclampsia was associated with a small-for-gestational-age infant. Increased levels of sFlt-1 and reduced levels of PlGF predict the subsequent development of preeclampsia. Copyright 2004 Massachusetts Medical Society

The structure and function of the endothelial glycocalyx layer.

Nancy J Tarbell,  Stephanie R. Damiano,  S Weinbaum (2006)
Over the past decade, since it was first observed in vivo, there has been an explosion in interest in the thin (approximately 500 nm), gel-like endothelial glycocalyx layer (EGL) that coats the luminal surface of blood vessels. In this review, we examine the mechanical and biochemical properties of the EGL and the latest studies on the interactions of this layer with red and white blood cells. This includes its deformation owing to fluid shear stress, its penetration by leukocyte microvilli, and its restorative response after the passage of a white cell in a tightly fitting capillary. We also examine recently discovered functions of the EGL in modulating the oncotic forces that regulate the exchange of water in microvessels and the role of the EGL in transducing fluid shear stress into the intracellular cytoskeleton of endothelial cells, in the initiation of intracellular signaling, and in the inflammatory response.

This article was submitted to Vascular Physiology, a section of the journal Frontiers in Physiology