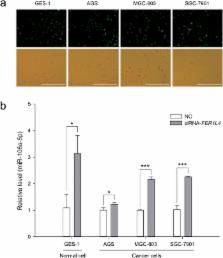 Aberrantly expressed long noncoding RNAs (lncRNAs) are associated with various cancers. However, the roles of lncRNAs in the pathogenesis of most cancers are unclear. Here, we report that the lncRNA FER1L4 (fer-1-like family member 4, pseudogene) acts as a competing endogenous RNA (ceRNA) to regulate the expression of PTEN (a well-known tumor suppressor gene) by taking up miR-106a-5p in gastric cancer. We observed that FER1L4 was downregulated in gastric cancer and that its level corresponded with that of PTEN mRNA. Both FER1L4 and PTEN mRNA were targets of miR-106a-5p. Further experiments demonstrated that FER1L4 downregulation liberates miR-106a-5p and decreases the abundances of PTEN mRNA and protein. More importantly, FER1L4 downregulation accelerated cell proliferation by promoting the G 0/G 1 to S phase transition. We conclude that one mechanism by which lncRNAs function in in tumorigenesis is as ceRNAs for tumor suppressor mRNAs.

Circular RNAs are a large class of animal RNAs with regulatory potency.

Thomas Hansen,  Trine Jensen,  Bettina H. Clausen … (2013)
MicroRNAs (miRNAs) are important post-transcriptional regulators of gene expression that act by direct base pairing to target sites within untranslated regions of messenger RNAs. Recently, miRNA activity has been shown to be affected by the presence of miRNA sponge transcripts, the so-called competing endogenous RNA in humans and target mimicry in plants. We previously identified a highly expressed circular RNA (circRNA) in human and mouse brain. Here we show that this circRNA acts as a miR-7 sponge; we term this circular transcript ciRS-7 (circular RNA sponge for miR-7). ciRS-7 contains more than 70 selectively conserved miRNA target sites, and it is highly and widely associated with Argonaute (AGO) proteins in a miR-7-dependent manner. Although the circRNA is completely resistant to miRNA-mediated target destabilization, it strongly suppresses miR-7 activity, resulting in increased levels of miR-7 targets. In the mouse brain, we observe overlapping co-expression of ciRS-7 and miR-7, particularly in neocortical and hippocampal neurons, suggesting a high degree of endogenous interaction. We further show that the testis-specific circRNA, sex-determining region Y (Sry), serves as a miR-138 sponge, suggesting that miRNA sponge effects achieved by circRNA formation are a general phenomenon. This study serves as the first, to our knowledge, functional analysis of a naturally expressed circRNA.

A ceRNA hypothesis: the Rosetta Stone of a hidden RNA language?

Leonardo Salmena,  Laura Poliseno,  Yvonne Tay … (2011)
Here, we present a unifying hypothesis about how messenger RNAs, transcribed pseudogenes, and long noncoding RNAs "talk" to each other using microRNA response elements (MREs) as letters of a new language. We propose that this "competing endogenous RNA" (ceRNA) activity forms a large-scale regulatory network across the transcriptome, greatly expanding the functional genetic information in the human genome and playing important roles in pathological conditions, such as cancer. Copyright © 2011 Elsevier Inc. All rights reserved.