Evolution of oxytocin pathways in the brain of vertebrates 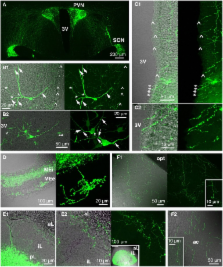 The central oxytocin system transformed tremendously during the evolution, thereby adapting to the expanding properties of species. In more basal vertebrates (paraphyletic taxon Anamnia, which includes agnathans, fish and amphibians), magnocellular neurosecretory neurons producing homologs of oxytocin reside in the wall of the third ventricle of the hypothalamus composing a single hypothalamic structure, the preoptic nucleus. This nucleus further diverged in advanced vertebrates (monophyletic taxon Amniota, which includes reptiles, birds, and mammals) into the paraventricular and supraoptic nuclei with accessory nuclei (AN) between them. The individual magnocellular neurons underwent a process of transformation from primitive uni- or bipolar neurons into highly differentiated neurons. Due to these microanatomical and cytological changes, the ancient release modes of oxytocin into the cerebrospinal fluid were largely replaced by vascular release. However, the most fascinating feature of the progressive transformations of the oxytocin system has been the expansion of oxytocin axonal projections to forebrain regions. In the present review we provide a background on these evolutionary advancements. Furthermore, we draw attention to the non-synaptic axonal release in small and defined brain regions with the aim to clearly distinguish this way of oxytocin action from the classical synaptic transmission on one side and from dendritic release followed by a global diffusion on the other side. Finally, we will summarize the effects of oxytocin and its homologs on pro-social reproductive behaviors in representatives of the phylogenetic tree and will propose anatomically plausible pathways of oxytocin release contributing to these behaviors in basal vertebrates and amniots.

Oxytocin, vasopressin, and the neurogenetics of sociality.

Zoe R. Donaldson, Larry J Young (2008)
There is growing evidence that the neuropeptides oxytocin and vasopressin modulate complex social behavior and social cognition. These ancient neuropeptides display a marked conservation in gene structure and expression, yet diversity in the genetic regulation of their receptors seems to underlie natural variation in social behavior, both between and within species. Human studies are beginning to explore the roles of these neuropeptides in social cognition and behavior and suggest that variation in the genes encoding their receptors may contribute to variation in human social behavior by altering brain function. Understanding the neurobiology and neurogenetics of social cognition and behavior has important implications, both clinically and for society.

Vasopressin and oxytocin release within the brain: a dynamic concept of multiple and variable modes of neuropeptide communication.

Rainer Landgraf, Inga Neumann (2004)
As exemplified particularly with vasopressin and oxytocin, release of neuropeptides within the brain occurs from dendrites, somata, and axons of neurosecretory neurons; mechanisms include activation of intracellular Ca2+ stores, changed strength of synaptic input and altered interaction between transcription factors and gene promoters. Upon demand, both diffuse spread of neuropeptides in the extracellular fluid following dendritic release and focal release from axonal terminals may contribute to regionally and temporally varying combinations of neuromodulator and neurotransmitter actions, thus providing a theoretically unlimited variability in interneuronal signaling. Thus, instead of favoring volume or synaptic transmission following central neuropeptide release, a more dynamic concept is presented with multiple and variable modes of release and communication. This concept considers neuropeptides in the extracellular fluid of the brain rather than those in the cerebrospinal fluid or plasma as primary signals, triggering a variety of receptor-mediated effects, including those underlying behavioral and neuroendocrine regulation and psychopathology.

Oxytocin: the great facilitator of life.

Heon-Jin Lee, Abbe H Macbeth, Jerome H. Pagani … (2009)
Oxytocin (Oxt) is a nonapeptide hormone best known for its role in lactation and parturition. Since 1906 when its uterine-contracting properties were described until 50 years later when its sequence was elucidated, research has focused on its peripheral roles in reproduction. Only over the past several decades have researchers focused on what functions Oxt might have in the brain, the subject of this review. Immunohistochemical studies revealed that magnocellular neurons of the hypothalamic paraventricular and supraoptic nuclei are the neurons of origin for the Oxt released from the posterior pituitary. Smaller cells in various parts of the brain, as well as release from magnocellular dendrites, provide the Oxt responsible for modulating various behaviors at its only identified receptor. Although Oxt is implicated in a variety of "non-social" behaviors, such as learning, anxiety, feeding and pain perception, it is Oxt's roles in various social behaviors that have come to the fore recently. Oxt is important for social memory and attachment, sexual and maternal behavior, and aggression. Recent work implicates Oxt in human bonding and trust as well. Human disorders characterized by aberrant social interactions, such as autism and schizophrenia, may also involve Oxt expression. Many, if not most, of Oxt's functions, from social interactions (affiliation, aggression) and sexual behavior to eventual parturition, lactation and maternal behavior, may be viewed as specifically facilitating species propagation.

This article was submitted to the journal Frontiers in Behavioral Neuroscience.