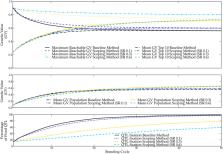 Genomic selection has been successfully implemented in plant and animal breeding. The transition of parental selection based on phenotypic characteristics to genomic selection (GS) has reduced breeding time and cost while accelerating the rate of genetic progression. Although breeding methods have been adapted to include genomic selection, parental selection often involves truncation selection, selecting the individuals with the highest genomic estimated breeding values (GEBVs) in the hope that favorable properties will be passed to their offspring. This ensures genetic progression and delivers offspring with high genetic values. However, several favorable quantitative trait loci (QTL) alleles risk being eliminated from the breeding population during breeding. We show that this could reduce the mean genetic value that the breeding population could reach in the long term with up to 40%. In this paper, by means of a simulation study, we propose a new method for parental mating that is able to preserve the genetic variation in the breeding population, preventing premature convergence of the genetic values to a local optimum, thus maximizing the genetic values in the long term. We do not only prevent the fixation of several unfavorable QTL alleles, but also demonstrate that the genetic values can be increased by up to 15 percentage points compared with truncation selection.

P VanRaden (2008)
Efficient methods for processing genomic data were developed to increase reliability of estimated breeding values and to estimate thousands of marker effects simultaneously. Algorithms were derived and computer programs tested with simulated data for 2,967 bulls and 50,000 markers distributed randomly across 30 chromosomes. Estimation of genomic inbreeding coefficients required accurate estimates of allele frequencies in the base population. Linear model predictions of breeding values were computed by 3 equivalent methods: 1) iteration for individual allele effects followed by summation across loci to obtain estimated breeding values, 2) selection index including a genomic relationship matrix, and 3) mixed model equations including the inverse of genomic relationships. A blend of first- and second-order Jacobi iteration using 2 separate relaxation factors converged well for allele frequencies and effects. Reliability of predicted net merit for young bulls was 63% compared with 32% using the traditional relationship matrix. Nonlinear predictions were also computed using iteration on data and nonlinear regression on marker deviations; an additional (about 3%) gain in reliability for young bulls increased average reliability to 66%. Computing times increased linearly with number of genotypes. Estimation of allele frequencies required 2 processor days, and genomic predictions required <1 d per trait, and traits were processed in parallel. Information from genotyping was equivalent to about 20 daughters with phenotypic records. Actual gains may differ because the simulation did not account for linkage disequilibrium in the base population or selection in subsequent generations.

The Pfam protein families database: towards a more sustainable future

Robert D. Finn, Penelope Coggill, Ruth Y. Eberhardt … (2015)
In the last two years the Pfam database (http://pfam.xfam.org) has undergone a substantial reorganisation to reduce the effort involved in making a release, thereby permitting more frequent releases. Arguably the most significant of these changes is that Pfam is now primarily based on the UniProtKB reference proteomes, with the counts of matched sequences and species reported on the website restricted to this smaller set. Building families on reference proteomes sequences brings greater stability, which decreases the amount of manual curation required to maintain them. It also reduces the number of sequences displayed on the website, whilst still providing access to many important model organisms. Matches to the full UniProtKB database are, however, still available and Pfam annotations for individual UniProtKB sequences can still be retrieved. Some Pfam entries (1.6%) which have no matches to reference proteomes remain; we are working with UniProt to see if sequences from them can be incorporated into reference proteomes. Pfam-B, the automatically-generated supplement to Pfam, has been removed. The current release (Pfam 29.0) includes 16 295 entries and 559 clans. The facility to view the relationship between families within a clan has been improved by the introduction of a new tool.

Linkage disequilibrium and persistence of phase in Holstein-Friesian, Jersey and Angus cattle.

A de Roos, B. Hayes, R J Spelman … (2008)
When a genetic marker and a quantitative trait locus (QTL) are in linkage disequilibrium (LD) in one population, they may not be in LD in another population or their LD phase may be reversed. The objectives of this study were to compare the extent of LD and the persistence of LD phase across multiple cattle populations. LD measures r and r(2) were calculated for syntenic marker pairs using genomewide single-nucleotide polymorphisms (SNP) that were genotyped in Dutch and Australian Holstein-Friesian (HF) bulls, Australian Angus cattle, and New Zealand Friesian and Jersey cows. Average r(2) was approximately 0.35, 0.25, 0.22, 0.14, and 0.06 at marker distances 10, 20, 40, 100, and 1000 kb, respectively, which indicates that genomic selection within cattle breeds with r(2) >or= 0.20 between adjacent markers would require approximately 50,000 SNPs. The correlation of r values between populations for the same marker pairs was close to 1 for pairs of very close markers (<10 kb) and decreased with increasing marker distance and the extent of divergence between the populations. To find markers that are in LD with QTL across diverged breeds, such as HF, Jersey, and Angus, would require approximately 300,000 markers.