The Impact of Epidemic Violence on the Prevalence of Psychiatric Disorders in Sao Paulo and Rio de Janeiro, Brazil 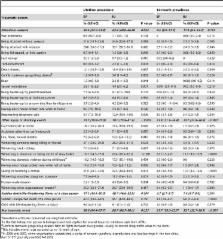 To study the relationship between traumatic events and prevalence of mental disorders in São Paulo and Rio de Janeiro, Brazil.

Cross-sectional survey carried out in 2007–2008 with a probabilistic representative sample of 15- to 75-year-old residents in Sao Paulo and Rio de Janeiro, Brazil, using the Composite International Diagnostic Interview.

Our findings show that psychiatric disorders and traumatic events, especially violence, are extremely common in Sao Paulo and Rio de Janeiro, supporting the idea that neuropsychiatric disorders and external causes have become a major public health priority, as they are amongst the leading causes of burden of disease in low and middle-income countries. The comparison between the two cities regarding patterns of violence and psychiatric morbidity suggests that environmental factors may buffer the negative impacts of traumatic events. Identifying such factors might guide the implementation of interventions to improve mental health and quality of life in LMIC urban centers.

Lifetime and 12-month prevalence of DSM-III-R psychiatric disorders in the United States. Results from the National Comorbidity Survey.

Susan Eshleman,  Michael D. Hughes,  R Kessler … (1993)
This study presents estimates of lifetime and 12-month prevalence of 14 DSM-III-R psychiatric disorders from the National Comorbidity Survey, the first survey to administer a structured psychiatric interview to a national probability sample in the United States. The DSM-III-R psychiatric disorders among persons aged 15 to 54 years in the noninstitutionalized civilian population of the United States were assessed with data collected by lay interviewers using a revised version of the Composite International Diagnostic Interview. Nearly 50% of respondents reported at least one lifetime disorder, and close to 30% reported at least one 12-month disorder. The most common disorders were major depressive episode, alcohol dependence, social phobia, and simple phobia. More than half of all lifetime disorders occurred in the 14% of the population who had a history of three or more comorbid disorders. These highly comorbid people also included the vast majority of people with severe disorders. Less than 40% of those with a lifetime disorder had ever received professional treatment, and less than 20% of those with a recent disorder had been in treatment during the past 12 months. Consistent with previous risk factor research, it was found that women had elevated rates of affective disorders and anxiety disorders, that men had elevated rates of substance use disorders and antisocial personality disorder, and that most disorders declined with age and with higher socioeconomic status. The prevalence of psychiatric disorders is greater than previously thought to be the case. Furthermore, this morbidity is more highly concentrated than previously recognized in roughly one sixth of the population who have a history of three or more comorbid disorders. This suggests that the causes and consequences of high comorbidity should be the focus of research attention. The majority of people with psychiatric disorders fail to obtain professional treatment. Even among people with a lifetime history of three or more comorbid disorders, the proportion who ever obtain specialty sector mental health treatment is less than 50%. These results argue for the importance of more outreach and more research on barriers to professional help-seeking.

Laura Andrade,  Yuan-Pang Wang,  Solange Andreoni … (2012)
Background World population growth is projected to be concentrated in megacities, with increases in social inequality and urbanization-associated stress. São Paulo Metropolitan Area (SPMA) provides a forewarning of the burden of mental disorders in urban settings in developing world. The aim of this study is to estimate prevalence, severity, and treatment of recently active DSM-IV mental disorders. We examined socio-demographic correlates, aspects of urban living such as internal migration, exposure to violence, and neighborhood-level social deprivation with 12-month mental disorders. Methods and Results A representative cross-sectional household sample of 5,037 adults was interviewed face-to-face using the WHO Composite International Diagnostic Interview (CIDI), to generate diagnoses of DSM-IV mental disorders within 12 months of interview, disorder severity, and treatment. Administrative data on neighborhood social deprivation were gathered. Multiple logistic regression was used to evaluate individual and contextual correlates of disorders, severity, and treatment. Around thirty percent of respondents reported a 12-month disorder, with an even distribution across severity levels. Anxiety disorders were the most common disorders (affecting 19.9%), followed by mood (11%), impulse-control (4.3%), and substance use (3.6%) disorders. Exposure to crime was associated with all four types of disorder. Migrants had low prevalence of all four types compared to stable residents. High urbanicity was associated with impulse-control disorders and high social deprivation with substance use disorders. Vulnerable subgroups were observed: women and migrant men living in most deprived areas. Only one-third of serious cases had received treatment in the previous year. Discussion Adults living in São Paulo megacity had prevalence of mental disorders at greater levels than similar surveys conducted in other areas of the world. Integration of mental health promotion and care into the rapidly expanding Brazilian primary health system should be strengthened. This strategy might become a model for poorly resourced and highly populated developing countries.

Competing Interests: The authors have declared that no competing interest exist.

This study was supported by the State of São Paulo Research Foundation - FAPESP ( www.fapesp.br) through the grant 2004/15039-0, and the National Research and Technology Development Council - CNPq ( www.cnpq.br) through the grant 420122/2005-2. Wagner Ribeiro received a doctorate scholarship from CNPQ (141467/2007-0) and a one-year scholarship from the Brazilian Coordination for Improvement of Faculty Personnel - CAPES ( www.capes.gov.br), Proc.4516/07-9, for a one-year training at the Institute of Psychiatry - King's College London. The funders had no role in study design, data collection and analysis, decision to publish, or preparation of the manuscript.