Phase I clinical trial and pharmacokinetic evaluation of NK911, a micelle-encapsulated doxorubicin 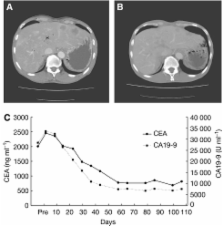 A new concept for macromolecular therapeutics in cancer chemotherapy: mechanism of tumoritropic accumulation of proteins and the antitumor agent smancs.

Yasuhiro Matsumura,  Miki Maeda (1986)
We previously found that a polymer conjugated to the anticancer protein neocarzinostatin, named smancs, accumulated more in tumor tissues than did neocarzinostatin. To determine the general mechanism of this tumoritropic accumulation of smancs and other proteins, we used radioactive (51Cr-labeled) proteins of various molecular sizes (Mr 12,000 to 160,000) and other properties. In addition, we used dye-complexed serum albumin to visualize the accumulation in tumors of tumor-bearing mice. Many proteins progressively accumulated in the tumor tissues of these mice, and a ratio of the protein concentration in the tumor to that in the blood of 5 was obtained within 19 to 72 h. A large protein like immunoglobulin G required a longer time to reach this value of 5. The protein concentration ratio in the tumor to that in the blood of neither 1 nor 5 was achieved with neocarzinostatin, a representative of a small protein (Mr 12,000) in all time. We speculate that the tumoritropic accumulation of these proteins resulted because of the hypervasculature, an enhanced permeability to even macromolecules, and little recovery through either blood vessels or lymphatic vessels. This accumulation of macromolecules in the tumor was also found after i.v. injection of an albumin-dye complex (Mr 69,000), as well as after injection into normal and tumor tissues. The complex was retained only by tumor tissue for prolonged periods. There was little lymphatic recovery of macromolecules from tumor tissue. The present finding is of potential value in macromolecular tumor therapeutics and diagnosis.

Y Barenholz,  Thomas Martin,  T Safra … (1994)
In preclinical studies, a doxorubicin liposome formulation containing polyethylene-glycol (Doxil) shows a long circulation time in plasma, enhanced accumulation in murine tumors, and a superior therapeutic activity over free (unencapsulated) doxorubicin (DOX). The purpose of this study was to characterize the pharmacokinetics of Doxil in cancer patients in comparison with free DOX and examine its accumulation in malignant effusions. The pharmacokinetics of doxorubicin and/or liposome-associated doxorubicin were analyzed in seven patients after injections of equivalent doses of free DOX and Doxil and in an additional group of nine patients after injection of Doxil only. Two dose levels were examined, 25 and 50 mg/m2. When possible, drug levels were also measured in malignant effusions. The plasma elimination of Doxil followed a biexponential curve with half-lives of 2 and 45 h (median values), most of the dose being cleared from plasma under the longer half-life. Nearly 100% of the drug detected in plasma after Doxil injection was in liposome-encapsulated form. A slow plasma clearance (0.1 liter/h for Doxil versus 45 liters/h for free DOX) and a small volume of distribution (4 liters for Doxil versus 254 liters for free DOX) are characteristic of Doxil. Doxorubicin metabolites were detected in the urine of Doxil-treated patients with a pattern similar to that reported for free DOX, although the overall urinary excretion of drug and metabolites was significantly reduced. Doxil treatment resulted in a 4- to 16-fold enhancement of drug levels in malignant effusions, peaking between 3 to 7 days after injection. Stomatitis related to Doxil occurred in 5 of 15 evaluable patients and appears to be the most significant side effect in heavily pretreated patients. The results of this study are consistent with preclinical findings indicating that the pharmacokinetics of doxorubicin are drastically altered using Doxil and follow a pattern dictated by the liposome carrier. The enhanced drug accumulation in malignant effusions is apparently related to liposome longevity in circulation. Further clinical investigation is needed to establish the relevance of these findings with regard to the ability of liposomes to modify the delivery of doxorubicin to solid tumors and its pattern of antitumor activity.

J Fleagle,  Richard M Gore,  H. A. Gordon … (2001)
To compare the efficacy and safety of pegylated liposomal doxorubicin (PLD) and topotecan in patients with epithelial ovarian carcinoma that recurred after or didn't respond to first-line, platinum-based chemotherapy. Patients with measurable and assessable disease were randomized to receive either PLD 50 mg/m(2) as a 1-hour infusion every 4 weeks or topotecan 1.5 mg/m(2)/d for 5 consecutive days every 3 weeks. Patients were stratified prospectively for platinum sensitivity and for the presence or absence of bulky disease. A total of 474 patients were treated (239 PLD and 235 topotecan). They comprised the intent-to-treat population. The overall progression-free survival rates were similar between the two arms (P =.095). The overall response rates for PLD and topotecan were 19.7% and 17.0%, respectively (P =.390). Median overall survival times were 60 weeks for PLD and 56.7 weeks for topotecan. Data analyzed in platinum-sensitive patients demonstrated a statistically significant benefit from PLD for progression-free survival (P =.037), with medians of 28.9 for PLD versus 23.3 weeks for topotecan. For overall survival, PLD was significantly superior to topotecan (P =.008), with a median of 108 weeks versus 71.1 weeks. The platinum-refractory subgroup demonstrated a nonstatistically significant survival trend in favor of topotecan (P =.455). Severe hematologic toxicity was more common with topotecan and was more likely to be associated with dosage modification, or growth factor or blood product utilization. The comparable efficacy, favorable safety profile, and convenient dosing support the role of PLD as a valuable treatment option in this patient population.