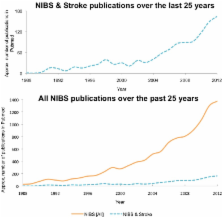 Influence of interhemispheric interactions on motor function in chronic stroke.

Edited by: Edward Taub, University of Alabama at Birmingham, USA