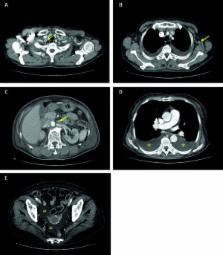 Thrombocytopenia, anasarca, fever, renal insufficiency, and organomegaly constitute TAFRO syndrome, a variant of Castleman disease. We describe a patient with TAFRO syndrome who underwent renal biopsy. A 79-year-old woman was referred to us with fever and leg edema. She also had thrombocytopenia, pleural effusion, ascites, and acute kidney injury, and was admitted to our hospital. Her response to initial therapy with corticosteroid and cyclosporine was poor. Therefore, she received 4 doses of rituximab per week, which resulted in clinical improvement, including recovery of thrombocytopenia. A kidney biopsy thereafter showed diffuse, global glomerular endothelial injury indicating thrombotic microangiopathy (TMA). These findings suggested that TMA is associated with the thrombocytopenia and renal insufficiency of TAFRO syndrome.

Hiroshi Yamamoto,  Yasufumi Masaki,  Hiroshi Kawabata … (2016)
TAFRO syndrome is a systemic inflammatory disorder characterized by thrombocytopenia, anasarca including pleural effusion and ascites, fever, renal insufficiency, and organomegaly including hepatosplenomegaly and lymphadenopathy. Its onset may be acute or sub-acute, but its etiology is undetermined. Although several clinical and pathological characteristics of TAFRO syndrome resemble those of multicentric Castleman disease (MCD), other specific features can differentiate between them. Some TAFRO syndrome patients have been successfully treated with glucocorticoids and/or immunosuppressants, including cyclosporin A, tocilizumab and rituximab, whereas others are refractory to treatment, and eventually succumb to the disease. Early and reliable diagnoses and early treatments with appropriate agents are essential to enhancing patient survival. The present article reports the 2015 updated diagnostic criteria, disease severity classification and treatment strategy for TAFRO syndrome, as formulated by Japanese research teams. These criteria and classification have been applied and retrospectively validated on clinicopathologic data of 28 patients with this and similar conditions (e.g. MCD with serositis and thrombocytopenia).

Masaru Kojima,  Hiroshi Kawabata,  Yasufumi Masaki … (2012)
Recently, a unique clinicopathologic variant of multicentric Castleman's disease (MCD) has been identified in Japan. This disease is characterized by a constellation of symptoms, as listed in the title, and multiple lymphadenopathy of mild degree with a pathologic diagnosis of atypical CD, often posing diagnostic and therapeutic problems for pathologists and hematologists, respectively. These findings suggest that this disease represents a novel clinical entity belonging to systemic inflammatory disorders with a background of immunological abnormality beyond the ordinal spectrum of MCD. To define this disorder more clearly, Japanese participants presented clinicopathologic data at the Fukushima and Nagoya meetings. Many of the patients presented by the participants were significantly accompanied by a combination of thrombocytopenia, ascites (anasarca), pleural effusions, microcytic anemia, fever, myelofibrosis, renal dysfunction, and organomegaly (TAFRO). Multiple lymphadenopathies were generally of mild degree, less than 1.5 cm in diameter, and consistently featured the histopathology of mixed- or less hyaline vascular-type CD. Autoantibodies were often detected. However, this disease did not fulfill the diagnostic criteria for well-known autoimmune diseases including systemic lupus erythematosus. Castleman-Kojima disease and TAFRO syndrome (the favored clinical term) were proposed for this disease. The patients were sensitive to steroid and anti-interleukin-6 receptor antibody (tocilizumab), but some exhibited a deteriorated clinical course despite the treatment. The participants proposed a future nationwide survey and a Japanese consortium to facilitate further clinical and therapeutic studies of this novel disease. [J Clin Exp Hematop 53(1): 57-61, 2013].