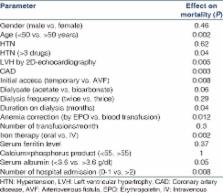 This study was planned to analyze the hemodialysis practice patterns from a tertiary care referral centre as there is very limited data from India. All patients of ESRD on maintenance hemodialysis (MHD) in dialysis unit at AIMS, Kochi, Kerala for a minimum period of 3 months were included. A total of 134 patients (M: F 2:1) with age of 20 to 84 years (Mean: 59.83; SD: 11.98) were studied. The most common causes of ESRD in study population were diabetic nephropathy (DN) (59.7%) followed by unclassified group (19.4%), chronic glomerulonephritis (CGN) (11.9%). Majority (81%) were initiated on MHD through temporary vascular access on emergency basis. Majority (79%) of the patients were on twice weekly MHD. The range of eGFR (ml/min/1.73 m2) at the time of initiation of MHD was 1.26-11.78 by CG formula and 2.18-16.4 by MDRD equation. The mean duration on hemodialysis was 37.16 months and 50.7% patients had died during the follow-up period (3-108 months). The mean survival time on hemodialysis was 40.31 months (SD = 26.69). The mean survival time was lower in diabetic nephropathy (35.93 months) than in non-diabetic renal disease (47.46 months). The most common causes of deaths were cardiovascular events (51.5%), and infections (26.5%). In conclusion, males outnumbered females, among those on hemodialysis. There was no significant difference in eGFR at initiation of MHD based on etiologies. Initiation of MHD via temporary access, presence of LVH, acute coronary syndrome, use of acetate dialysate, need for parenteral iron therapy had impact on mortality. Survival rates while on hemodialysis at end 1 st, 3 rd, 5 th and 7 th years were 87.31, 45.52, 21.64 and 7.46 percentages respectively.

What do we know about chronic kidney disease in India: first report of the Indian CKD registry

Mohan M Rajapurkar,  George T. John,  Ashok L Kirpalani … (2012)
Background There are no national data on the magnitude and pattern of chronic kidney disease (CKD) in India. The Indian CKD Registry documents the demographics, etiological spectrum, practice patterns, variations and special characteristics. Methods Data was collected for this cross-sectional study in a standardized format according to predetermined criteria. Of the 52,273 adult patients, 35.5%, 27.9%, 25.6% and 11% patients came from South, North, West and East zones respectively. Results The mean age was 50.1 ± 14.6 years, with M:F ratio of 70:30. Patients from North Zone were younger and those from the East Zone older. Diabetic nephropathy was the commonest cause (31%), followed by CKD of undetermined etiology (16%), chronic glomerulonephritis (14%) and hypertensive nephrosclerosis (13%). About 48% cases presented in Stage V; they were younger than those in Stages III-IV. Diabetic nephropathy patients were older, more likely to present in earlier stages of CKD and had a higher frequency of males; whereas those with CKD of unexplained etiology were younger, had more females and more frequently presented in Stage V. Patients in lower income groups had more advanced CKD at presentation. Patients presenting to public sector hospitals were poorer, younger, and more frequently had CKD of unknown etiology. Conclusions This report confirms the emergence of diabetic nephropathy as the pre-eminent cause in India. Patients with CKD of unknown etiology are younger, poorer and more likely to present with advanced CKD. There were some geographic variations.

Sex-Specific Differences in Hemodialysis Prevalence and Practices and the Male-to-Female Mortality Rate: The Dialysis Outcomes and Practice Patterns Study (DOPPS)

Timing of nephrologist referral and arteriovenous access use: the CHOICE Study.

B Astor,  Peter J. Sadler,  Alex Eustace … (2001)
Recent clinical practice guidelines recommend the creation of an arteriovenous (AV) vascular access (ie, native fistula or synthetic graft) before the start of chronic hemodialysis therapy to prevent the need for complication-prone dialysis catheters. We report on the association of referral to a nephrologist with duration of dialysis-catheter use and type of vascular access used in the first 6 months of hemodialysis therapy. The study population is a representative cohort of 356 patients with questionnaire, laboratory, and medical record data collected as part of the Choices for Healthy Outcomes in Caring for End-Stage Renal Disease Center Study. Patients who reported being seen by a nephrologist at least 1 month before starting hemodialysis therapy (75%) were more likely than those referred later to use an AV access at initiation (39% versus 10%; P < 0.001) and 6 months after starting hemodialysis therapy (74% versus 56%; P < 0.01). Patients referred within 1 month of initiating hemodialysis therapy used a dialysis catheter for a median of 202 days compared with 64, 67, and 19 days for patients referred 1 to 4, 4 to 12, and greater than 12 months before initiating hemodialysis therapy, respectively (P trend < 0.001). Patients referred at least 4 months before initiating hemodialysis therapy were more likely than patients referred later to use an AV fistula, rather than a synthetic graft, as their first AV access (45% versus 31%; P < 0.01). These associations remained after adjustment for age, sex, race, marital status, education, insurance coverage, comorbid disease status, albumin level, body mass index, and underlying renal diagnosis. These data show that late referral to a nephrologist substantially increases the likelihood of dialysis-catheter use at the initiation of hemodialysis therapy and is associated with prolonged catheter use. Regardless of the time of referral, only a minority of patients used an AV access at the initiation of treatment, and greater than 25% had not used an AV access 6 months after initiation. Thus, further efforts to improve both referral patterns and preparation for dialysis after referral are needed.