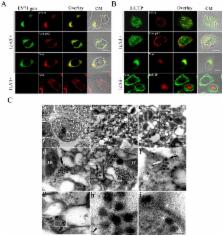 Enterovirus 71 (EV71) is one of the main causative agents of foot, hand and mouth disease. Its infection usually causes severe central nervous system diseases and complications in infected infants and young children. In the present study, we demonstrated that EV71 infection caused the rearrangement of vimentin in human astrocytoma cells. The rearranged vimentin, together with various EV71 components, formed aggresomes-like structures in the perinuclear region. Electron microscopy and viral RNA labeling indicated that the aggresomes were virus replication sites since most of the EV71 particles and the newly synthesized viral RNA were concentrated here. Further analysis revealed that the vimentin in the virus factories was serine-82 phosphorylated. More importantly, EV71 VP1 protein is responsible for the activation of calmodulin-dependent protein kinase II (CaMK-II) which phosphorylated the N-terminal domain of vimentin on serine 82. Phosphorylation of vimentin and the formation of aggresomes were required for the replication of EV71 since the latter was decreased markedly after phosphorylation was blocked by KN93, a CaMK-II inhibitor. Thus, as one of the consequences of CaMK-II activation, vimentin phosphorylation and rearrangement may support virus replication by playing a structural role for the formation of the replication factories. Collectively, this study identified the replication centers of EV71 in human astrocyte cells. This may help us understand the replication mechanism and pathogenesis of EV71 in human.

S Moss,  Kristen B Casper,  Lan Zhang … (2005)
To investigate the role of astrocytes in regulating synaptic transmission, we generated inducible transgenic mice that express a dominant-negative SNARE domain selectively in astrocytes to block the release of transmitters from these glial cells. By releasing adenosine triphosphate, which accumulates as adenosine, astrocytes tonically suppressed synaptic transmission, thereby enhancing the dynamic range for long-term potentiation and mediated activity-dependent, heterosynaptic depression. These results indicate that astrocytes are intricately linked in the regulation of synaptic strength and plasticity and provide a pathway for synaptic cross-talk.

Shoujian Wang,  J. C. Huang,  Chia-Chi Chang … (1999)
Enterovirus 71 infection causes hand-foot-and-mouth disease in young children, which is characterized by several days of fever and vomiting, ulcerative lesions in the oral mucosa, and vesicles on the backs of the hands and feet. The initial illness resolves but is sometimes followed by aseptic meningitis, encephalomyelitis, or even acute flaccid paralysis similar to paralytic poliomyelitis. We describe the neurologic complications associated with the enterovirus 71 epidemic that occurred in Taiwan in 1998. At three major hospitals we identified 41 children with culture-confirmed enterovirus 71 infection and acute neurologic manifestations. Magnetic resonance imaging (MRI) was performed in 4 patients with acute flaccid paralysis and 24 with rhombencephalitis. The mean age of the patients was 2.5 years (range, 3 months to 8.2 years). Twenty-eight patients had hand-foot-and-mouth disease (68 percent), and 6 had herpangina (15 percent). The other seven patients had no skin or mucosal lesions. Three neurologic syndromes were identified: aseptic meningitis (in 3 patients); brain-stem encephalitis, or rhombencephalitis (in 37); and acute flaccid paralysis (in 4), which followed rhombencephalitis in 3 patients. In 20 patients with rhombencephalitis, the syndrome was characterized by myoclonic jerks and tremor, ataxia, or both (grade I disease). Ten patients had myoclonus and cranial-nerve involvement (grade II disease). In seven patients the brain-stem infection produced transient myoclonus followed by the rapid onset of respiratory distress, cyanosis, poor peripheral perfusion, shock, coma, loss of the doll's eye reflex, and apnea (grade III disease); five of these patients died within 12 hours after admission. In 17 of the 24 patients with rhombencephalitis who underwent MRI, T2-weighted scans showed high-intensity lesions in the brain stem, most commonly in the pontine tegmentum. At follow-up, two of the patients with acute flaccid paralysis had residual limb weakness, and five of the patients with rhombencephalitis had persistent neurologic deficits, including myoclonus (in one child), cranial-nerve deficits (in two), and ventilator-dependent apnea (in two). In the 1998 enterovirus 71 epidemic in Taiwan, the chief neurologic complication was rhombencephalitis, which had a fatality rate of 14 percent. The most common initial symptoms were myoclonic jerks, and MRI usually showed evidence of brainstem involvement.

Reyes R Novoa,  Gloria Calderita,  Rocío Arranz … (2005)
Abstract Genome replication and assembly of viruses often takes place in specific intracellular compartments where viral components concentrate, thereby increasing the efficiency of the processes. For a number of viruses the formation of ‘factories’ has been described, which consist of perinuclear or cytoplasmic foci that mostly exclude host proteins and organelles but recruit specific cell organelles, building a unique structure. The formation of the viral factory involves a number of complex interactions and signalling events between viral and cell factors. Mitochondria, cytoplasmic membranes and cytoskeletal components frequently participate in the formation of viral factories, supplying basic and common needs for key steps in the viral replication cycle.

This work is supported by the grants from the National Basic Research Program of China (973 Program, Nos. 2011CB504703 and 2010CB530102) and the National Natural Science Foundation of China (NSFC, Grant Nos. 81021003 and 31270211). The funders had no role in study design, data collection and analysis, decision to publish, or preparation of the manuscript.