A Randomized Controlled Trial: Comparison of 4% Articaine versus 0.5% Bupivacaine for Ambulatory Orthopedic Surgery under Supraclavicular Block 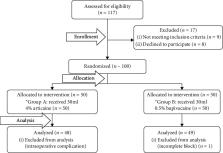 Articaine has been used in many dental and ophthalmic outpatient procedures. In the era of ultrasound-guided regional techniques, we searched for short and potent local anesthetic for patients undergoing ambulatory upper limb procedures. However, studies about articaine efficacy in brachial plexus block are limited. In this study, we compared its safety and efficacy against bupivacaine as a commonly used anesthetic agent for ultrasound-guided supraclavicular brachial plexus block.

This randomized prospective study was performed at Ain Shams University Hospital from January to March 2020. A total of 117 patients aged 20 to 60 years, with the American Society of Anesthesiologists physical status I and II, were enrolled in the study. Patients were randomly allocated into two groups: in group A, patients received 30 ml articaine 2%, and in group B, patients received 30 ml of bupivacaine 0.5%. We measured motor and sensory block duration as a primary outcome. Other secondary outcomes such as onset of block, duration of analgesia, patient satisfaction, and time to home discharge readiness were also measured.

Earlier resolution of articaine block makes it more favorable than bupivacaine for ambulatory surgery. This trial is registered with (NCT04189198).

Laura Reed,  P. Becker (2005)
It is impossible to provide effective dental care without the use of local anesthetics. This drug class has an impressive history of safety and efficacy, but all local anesthetics have the potential to produce significant toxicity if used carelessly. The purpose of this review is to update the practitioner on issues regarding the basic pharmacology and clinical use of local anesthetic formulations.

Sarita Swami,  Varshali M Keniya,  Sushma Ladi … (2012)
Background and Objectives: Alpha-2 agonists are mixed with local anaesthetic agents to extend the duration of spinal, extradural and peripheral nerve blocks. We compared clonidine and dexmedetomidine as an adjuvant to local anaesthetic agent in supraclavicular brachial plexus block with respect to onset and duration of sensory and motor block and duration of analgesia. Methods: Sixty ASA I and II patients scheduled for elective upper limb surgeries under supraclavicular brachial plexus block were divided into two equal groups in a randomized, double-blinded fashion. Group C received clonidine 1 μg/kg and Group D received dexmedetomidine 1 μg/kg added to bupivacaine 0.25% (35 cc). Onset and recovery time of sensory and motor block, duration of analgesia and quality of block were studied in both the groups. Results: Duration of sensory block and motor block was 227.00±48.36 and 292.67±59.13 min, respectively, in group C, while it was 413.97±87.13 and 472.24±90.06 min, respectively, in group D. There was no statistically significant difference in onset of sensory and motor block between the two groups. The duration of analgesia (time to requirement of rescue analgesia) in group D was 456±97 min, while in group C, it was 289±62 min. Statistically, this difference was significant (P=0.001). The number of patients achieving grade IV quality (excellent) of block was higher in group D (80%) as compared with group C (40%) (P<0.05). Conclusion: Dexmedetomidine when added to local anaesthetic in supraclavicular brachial plexus block enhanced the duration of sensory and motor block and also the duration of analgesia. The time for rescue analgesia was prolonged in patients receiving dexmedetomidine. It also enhanced the quality of block as compared with clonidine.

L Vorobeichik,  R Brull,  F Abdallah (2017)
Dexmedetomidine has been proposed as a perineural local anaesthetic (LA) adjunct to prolong peripheral nerve block duration; however, results from our previous meta-analysis in the setting of brachial plexus block (BPB) did not support its use. Many additional randomized trials have since been published. We thus conducted an updated meta-analysis.