Extended adjuvant hormonal therapy with exemestane has no detrimental effect on the lipid profile of postmenopausal breast cancer patients: final results of the ATENA lipid substudy 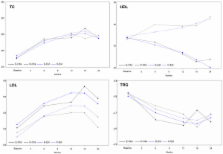 Extended adjuvant endocrine therapy for breast cancer with aromatase inhibitors may potentially alter the lipid profile of postmenopausal patients and thus increase the risk of developing cardiovascular disease. In this study, a subprotocol of the ATENA (Adjuvant post-Tamoxifen Exemestane versus Nothing Applied) trial, we compared the effect of the steroidal aromatase inactivator exemestane on the lipid profile of postmenopausal patients with operable breast cancer, in the adjuvant setting, with that of observation alone after completion of 5 to 7 years of primary treatment with tamoxifen.

In this open-label, randomized, parallel-group study, 411 postmenopausal patients with operable breast cancer, who had been treated with tamoxifen for 5 to 7 years, were randomized to either 5 additional years of exemestane (25 mg/day; n = 211) or observation only (n = 200). Assessments of total cholesterol (TC), high-density lipoprotein (HDL), low-density lipoprotein (LDL), and total serum triglycerides (TRG) were performed at baseline and then during each follow-up visit, performed at either 6 or 12 months, according to the center's clinical practice, until completing 24 months in the study.

Exemestane lacks the beneficial effect of tamoxifen on lipids; however, sequential adjuvant treatment with exemestane in postmenopausal breast cancer patients after cessation of 5 to 7 years of tamoxifen does not appear to alter the lipid profile significantly compared with that of an observational arm.

A comparison of letrozole and tamoxifen in postmenopausal women with early breast cancer.

John F Forbes,  Ian Smith,   … (2005)
The aromatase inhibitor letrozole is a more effective treatment for metastatic breast cancer and more effective in the neoadjuvant setting than tamoxifen. We compared letrozole with tamoxifen as adjuvant treatment for steroid-hormone-receptor-positive breast cancer in postmenopausal women. The Breast International Group (BIG) 1-98 study is a randomized, phase 3, double-blind trial that compared five years of treatment with various adjuvant endocrine therapy regimens in postmenopausal women with hormone-receptor-positive breast cancer: letrozole, letrozole followed by tamoxifen, tamoxifen, and tamoxifen followed by letrozole. This analysis compares the two groups assigned to receive letrozole initially with the two groups assigned to receive tamoxifen initially; events and follow-up in the sequential-treatment groups were included up to the time that treatments were switched. A total of 8010 women with data that could be assessed were enrolled, 4003 in the letrozole group and 4007 in the tamoxifen group. After a median follow-up of 25.8 months, 351 events had occurred in the letrozole group and 428 events in the tamoxifen group, with five-year disease-free survival estimates of 84.0 percent and 81.4 percent, respectively. As compared with tamoxifen, letrozole significantly reduced the risk of an event ending a period of disease-free survival (hazard ratio, 0.81; 95 percent confidence interval, 0.70 to 0.93; P=0.003), especially the risk of distant recurrence (hazard ratio, 0.73; 95 percent confidence interval, 0.60 to 0.88; P=0.001). Thromboembolism, endometrial cancer, and vaginal bleeding were more common in the tamoxifen group. Women given letrozole had a higher incidence of skeletal and cardiac events and of hypercholesterolemia. In postmenopausal women with endocrine-responsive breast cancer, adjuvant treatment with letrozole, as compared with tamoxifen, reduced the risk of recurrent disease, especially at distant sites. (ClinicalTrials.gov number, NCT00004205.) Copyright 2005 Massachusetts Medical Society.

Progress and promise: highlights of the international expert consensus on the primary therapy of early breast cancer 2007.

A Goldhirsch,  W.C. Wood,  R.D. Gelber … (2007)
The 10th St Gallen (Switzerland) expert consensus meeting in March 2007 refined and extended a target-oriented approach to adjuvant systemic therapy of early breast cancer. Target definition is inextricably intertwined with the availability of target-specific therapeutic agents. Since 2005, the presence of HER2 on the cell surface has been used as an effective target for trastuzumab much as steroid hormone receptors are targets for endocrine therapies. An expert Panel reaffirmed the primary importance of determining endocrine responsiveness of the cancer as a first approach to selecting systemic therapy. Three categories were acknowledged: highly endocrine responsive, incompletely endocrine responsive and endocrine non-responsive. The Panel accepted HER2-positivity to assign trastuzumab, and noted that adjuvant trastuzumab has only been assessed together with chemotherapy. They largely endorsed previous definitions of risk categories. While recognizing the existence of several molecularly-based tools for risk stratification, the Panel preferred to recommend the use of high-quality standard histopathological assessment for both risk allocation and target identification. Chemotherapy, although largely lacking specific target information, is the only option in cases which are both endocrine receptor-negative and HER2-negative. Chemotherapy is conventionally given with or preceding trastuzumab for patients with HER2-positive disease, and may be used for patients with endocrine responsive disease in cases where the sufficiency of endocrine therapy alone is uncertain. Recommendations are provided not as specific therapy guidelines but rather as a general guidance emphasizing main principles for tailoring therapeutic choice.

Deborah Grady (1992)
To critically review the risks and benefits of hormone therapy for asymptomatic postmenopausal women who are considering long-term hormone therapy to prevent disease or to prolong life. Review of the English-language literature since 1970 on the effect of estrogen therapy and estrogen plus progestin therapy on endometrial cancer, breast cancer, coronary heart disease, osteoporosis, and stroke. We used standard meta-analytic statistical methods to pool estimates from studies to determine summary relative risks for these diseases in hormone users and modified lifetable methods to estimate changes in lifetime probability and life expectancy due to use of hormone regimens. There is evidence that estrogen therapy decreases risk for coronary heart disease and for hip fracture, but long-term estrogen therapy increases risk for endometrial cancer and may be associated with a small increase in risk for breast cancer. The increase in endometrial cancer risk can probably be avoided by adding a progestin to the estrogen regimen for women who have a uterus, but the effects of combination hormones on risk for other diseases has not been adequately studied. We present estimates for changes in lifetime probabilities of disease and life expectancy due to hormone therapy in women who have had a hysterectomy; with coronary heart disease; and at increased risk for coronary heart disease, hip fracture, and breast cancer. Hormone therapy should probably be recommended for women who have had a hysterectomy and for those with coronary heart disease or at high risk for coronary heart disease. For other women, the best course of action is unclear.

This is an open access article distributed under the terms of the Creative Commons Attribution License ( http://creativecommons.org/licenses/by/2.0), which permits unrestricted use, distribution, and reproduction in any medium provided the original work is properly cited.