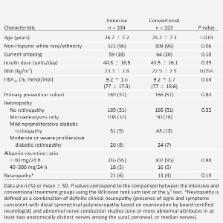 In a secondary analysis of women in the DCCT/EDIC ( n = 657), outcomes were the cumulative incidences of natural menopause and surgical menopause. Cox regression analyses were used to examine associations with treatment group, time-varying estimates of hemoglobin A 1c (HbA 1c), insulin dosage, BMI, and microvascular complications (retinopathy, nephropathy, and neuropathy).

S Genuth,  DM Nathan,  H. Duffy … (2000)
Among patients with type 1 diabetes mellitus, intensive therapy (with the aim of achieving near-normal blood glucose and glycosylated hemoglobin concentrations [hemoglobin A1c]) markedly reduces the risk of microvascular complications as compared with conventional therapy. To assess whether these benefits persist, we compared the effects of former and intensive conventional therapy on the recurrence and severity of retinopathy and nephropathy for four years after the end of the Diabetes Control and Complications Trial (DCCT). At the end of the DCCT, the patients in the conventional-therapy group were offered intensive therapy, and the care of all patients was transferred to their own physicians. Retinopathy was evaluated on the basis of centrally graded fundus photographs in 1208 patients during the fourth year after the DCCT ended, and nephropathy was evaluated on the basis of urine specimens obtained from 1302 patients during the third or fourth year, approximately half of whom were from each treatment group. The difference in the median glycosylated hemoglobin values between the conventional-therapy and intensive-therapy groups during the 6.5 years of the DCCT (average, 9.1 percent and 7.2 percent, respectively) narrowed during follow-up (median during 4 years, 8.2 percent and 7.9 percent, respectively, P<0.001). Nevertheless, the proportion of patients who had worsening retinopathy, including proliferative retinopathy, macular edema, and the need for laser therapy, was lower in the intensive-therapy group than in the conventional-therapy group (odds reduction, 72 percent to 87 percent, P<0.001). The proportion of patients with an increase in urinary albumin excretion was significantly lower in the intensive-therapy group. The reduction in the risk of progressive retinopathy and nephropathy resulting from intensive therapy in patients with type 1 diabetes persists for at least four years, despite increasing hyperglycemia.

Bernard Zinman,  I Marion Sumari-de Boer,  Wanjie Sun … (2011)
An impaired glomerular filtration rate (GFR) leads to end-stage renal disease and increases the risks of cardiovascular disease and death. Persons with type 1 diabetes are at high risk for kidney disease, but there are no interventions that have been proved to prevent impairment of the GFR in this population. In the Diabetes Control and Complications Trial (DCCT), 1441 persons with type 1 diabetes were randomly assigned to 6.5 years of intensive diabetes therapy aimed at achieving near-normal glucose concentrations or to conventional diabetes therapy aimed at preventing hyperglycemic symptoms. Subsequently, 1375 participants were followed in the observational Epidemiology of Diabetes Interventions and Complications (EDIC) study. Serum creatinine levels were measured annually throughout the course of the two studies. The GFR was estimated with the use of the Chronic Kidney Disease Epidemiology Collaboration formula. We analyzed data from the two studies to determine the long-term effects of intensive diabetes therapy on the risk of impairment of the GFR, which was defined as an incident estimated GFR of less than 60 ml per minute per 1.73 m(2) of body-surface area at two consecutive study visits. Over a median follow-up period of 22 years in the combined studies, impairment of the GFR developed in 24 participants assigned to intensive therapy and in 46 assigned to conventional therapy (risk reduction with intensive therapy, 50%; 95% confidence interval, 18 to 69; P=0.006). Among these participants, end-stage renal disease developed in 8 participants in the intensive-therapy group and in 16 in the conventional-therapy group. As compared with conventional therapy, intensive therapy was associated with a reduction in the mean estimated GFR of 1.7 ml per minute per 1.73 m(2) during the DCCT study but during the EDIC study was associated with a slower rate of reduction in the GFR and an increase in the mean estimated GFR of 2.5 ml per minute per 1.73 m(2) (P<0.001 for both comparisons). The beneficial effect of intensive therapy on the risk of an impaired GFR was fully attenuated after adjustment for glycated hemoglobin levels or albumin excretion rates. The long-term risk of an impaired GFR was significantly lower among persons treated early in the course of type 1 diabetes with intensive diabetes therapy than among those treated with conventional diabetes therapy. (Funded by the National Institute of Diabetes and Digestive and Kidney Diseases and others; DCCT/EDIC ClinicalTrials.gov numbers, NCT00360815 and NCT00360893.).

The analysis of failure times in the presence of competing risks.

N Breslow,  J Kalbfleisch,  V Farewell … (1978)
Distinct problems in the analysis of failure times with competing causes of failure include the estimation of treatment or exposure effects on specific failure types, the study of interrelations among failure types, and the estimation of failure rates for some causes given the removal of certain other failure types. The usual formation of these problems is in terms of conceptual or latent failure times for each failure type. This approach is criticized on the basis of unwarranted assumptions, lack of physical interpretation and identifiability problems. An alternative approach utilizing cause-specific hazard functions for observable quantities, including time-dependent covariates, is proposed. Cause-specific hazard functions are shown to be the basic estimable quantities in the competing risks framework. A method, involving the estimation of parameters that relate time-dependent risk indicators for some causes to cause-specific hazard functions for other causes, is proposed for the study of interrelations among failure types. Further, it is argued that the problem of estimation of failure rates under the removal of certain causes is not well posed until a mechanism for cause removal is specified. Following such a specification, one will sometimes be in a position to make sensible extrapolations from available data to situations involving cause removal. A clinical program in bone marrow transplantation for leukemia provides a setting for discussion and illustration of each of these ideas. Failure due to censoring in a survivorship study leads to further discussion.