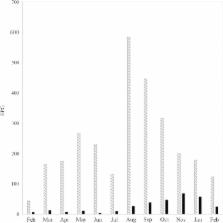 Arrested development of abomasal trichostrongylid nematodes was studied in 30 permanent grazing lambs on a large farm in the North-East of Algeria. The steppe climate has cold winters and hot and dry summers. The lambs were monitored monthly for gastrointestinal nematodes using nematode faecal egg counts, from February 2008 to February 2009. Every 2 months, two of the original 30 permanent lambs were necropsied after being held in pens for three weeks so that recently ingested infective larvae could develop into adults. The highest percentage of fourth stage larvae (L4), reaching 48% of the total worm burden, was recorded in abomasal contents in June. Teladorsagia and other Ostertagiinae constituted the highest percentage of L4 larvae (71%), whereas the percentage of Trichostrongylus (17.4%) or Haemonchus (11.6%) remained low. The dynamics of infection observed here (highest faecal egg count in August) and the stage composition of worm burden (highest percentage of L4 in June) provide strong evidence that arrested development had occurred.

Moisture and temperature requirements in faeces for the development of free-living stages of gastrointestinal nematodes of sheep, cattle and deer.

C Rossanigo,  L Gruner (1995)
Isolates from eight gastrointestinal nematode species parasitic in sheep, cattle and deer were maintained in sheep, to provide eggs in similar faecal environments and to compare temperature and moisture requirements for their development. Faecal cultures were processed at different temperatures (for four species) and moisture contents (for the eight species). At 60% of faecal moisture content (FMC), maximal rates of development (expressed as L3/100 hatchable eggs estimated by an extraction technique from the faeces) were observed at 20, 23 and 28 degrees C respectively for Ostertagia leptospicularis, O. ostertagi, Teladorsagia circumcincta and Trichostrongylus colubriformis. For the eight species, the curves of development rates as functions of FMC were Gaussian, without modification between 18 and 28 degrees C. Optimal developments were when the FMC ranged from 57 to 68%; low developments of 1L3/100eggs were observed when the FMC ranged from 85 to 95% and from 25 to 55%. The main differences between species were in the ability of the eggs of Teladorsagia circumcincta, Trichostrongylus colubriformis, T. vitrinus and Chabertia ovina to develop at lower FMC than Haemonchus contortus, O. ostertagi, O. leptospicularis and Cooperia oncophora.

[Study of the efficiency of a quantitative coproscopic technic for the routine diagnosis and control of parasitic infestations of cattle, sheep, horses and swine].

Epidemiology and seasonal dynamics of gastrointestinal nematode infections of sheep in a semi-arid region of eastern Ethiopia.

Menkir Sissay,  Arvid Uggla,  Peter J Waller (2007)
A study on the epidemiology and seasonal dynamics of gastrointestinal nematode infections of sheep was carried out in a semi-arid region of eastern Ethiopia for 2.5 years (May 2003 to September 2005). The experimental flock comprised a total of 60 Black Head Ogaden sheep, consisting of four equal groups of young male and female and old male and female sheep. These grazed on communal pastures together with a larger university flock, as well as with animals owned by neighbouring small-holder farmers. A new experimental flock was established each year of the study. Parasitological data (EPG, faecal culture L3, PCV and FAMACHA estimates) and animal performance (weight change) were recorded each month on all experimental animals. In addition, four tracer lambs were assigned each month to the flock to determine the seasonal patterns of infective larvae acquired from pasture. Results showed distinct seasonal patterns associated with the bi-modal annual rainfall. High levels of infection occurred during the short and long rain seasons with peaks occurring in May and September of each year. Haemonchus contortus was the most prevalent parasite, followed by Trichostrongylus spp., with a number of other nematode species being occasionally recorded. H. contortus showed and increased propensity to undergo arrested development during the dry seasons. Correlations between EPG and PCV, EPG and FAMACHA eye scores, and PCV and FAMACHA eye scores were all highly significant (P<0.001). However, there was no significant association between the EPG and LW of the study animals during each study year. This information will provide a basis for developing epidemiologically based control strategies for gastrointestinal nematode parasites that are appropriate for flocks owned by small-holder farmers of semi-arid areas of eastern Ethiopia.