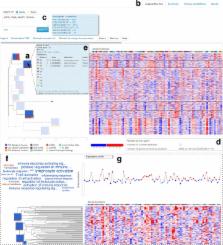 A widely applied approach to extract knowledge from high-throughput genomic data is clustering of gene expression profiles followed by functional enrichment analysis. This type of analysis, when done manually, is highly subjective and has limited reproducibility. Moreover, this pipeline can be very time-consuming and resource-demanding as enrichment analysis is done for tens to hundreds of clusters at a time. Thus, the task often needs programming skills to form a pipeline of different software tools or R packages to enable an automated approach. Furthermore, visualising the results can be challenging.

We developed a web tool, funcExplorer, which automatically combines hierarchical clustering and enrichment analysis to detect functionally related gene clusters. The functional characterisation is achieved using structured knowledge from data sources such as Gene Ontology, KEGG and Reactome pathways, Human Protein Atlas, and Human Phenotype Ontology. funcExplorer includes various measures for finding biologically meaningful clusters, provides a modern graphical user interface, and has wide-ranging data export and sharing options as well as software transparency by open-source code. The results are presented in a visually compact and interactive format, enabling users to explore the biological essence of the data. We compared our results with previously published gene clusters to demonstrate that funcExplorer can perform the data characterisation equally well, but without requiring labour-intensive manual interference.

The open-source web tool funcExplorer enables scientists with high-throughput genomic data to obtain a preliminary interactive overview of the expression patterns, gene names, and shared functionalities in their dataset in a visually pleasing format. funcExplorer is publicly available at https://biit.cs.ut.ee/funcexplorer

Elizabeth Quackenbush (2001)
Microarray experiments are providing unprecedented quantities of genome-wide data on gene-expression patterns. Although this technique has been enthusiastically developed and applied in many biological contexts, the management and analysis of the millions of data points that result from these experiments has received less attention. Sophisticated computational tools are available, but the methods that are used to analyse the data can have a profound influence on the interpretation of the results. A basic understanding of these computational tools is therefore required for optimal experimental design and meaningful data analysis.