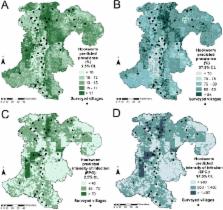 Among the common soil-transmitted helminth infections, hookworm causes the highest burden. Previous research in the southern part of Lao People’s Democratic Republic (Lao PDR) revealed high prevalence rates of hookworm infection. The purpose of this study was to predict the spatial distribution of hookworm infection and intensity, and to investigate risk factors in the Champasack province, southern Lao PDR.

A cross-sectional parasitological and questionnaire survey was conducted in 51 villages. Data on demography, socioeconomic status, water, sanitation, and behavior were combined with remotely sensed environmental data. Bayesian mixed effects logistic and negative binomial models were utilized to investigate risk factors and spatial distribution of hookworm infection and intensity, and to make predictions for non-surveyed locations.

A total of 3,371 individuals were examined with duplicate Kato-Katz thick smears and revealed a hookworm prevalence of 48.8%. Most infections (91.7%) were of light intensity (1-1,999 eggs/g of stool). Lower hookworm infection levels were associated with higher socioeconomic status. The lowest infection levels were found in preschool-aged children. Overall, females were at lower risk of infection, but women aged 50 years and above harbored the heaviest hookworm infection intensities. Hookworm was widespread in Champasack province with little evidence for spatial clustering. Infection risk was somewhat lower in the lowlands, mostly along the western bank of the Mekong River, while infection intensity was homogeneous across the Champasack province.

Hookworm transmission seems to occur within, rather than between villages in Champasack province. We present spatial risk maps of hookworm infection and intensity, which suggest that control efforts should be intensified in the Champasack province, particularly in mountainous areas.

Hookworm is a parasitic worm that can infect the human intestine. Infections are common in low- and middle-income tropical and subtropical countries, particularly where sanitation conditions are poor. Control programs aim at preventing heavy infection intensities, which are associated with morbidity. The aim of this study was to investigate risk factors for hookworm infection and intensity, and to predict their distribution in the Champasack province, southern Lao People’s Democratic Republic. We found that almost half of the 3,371 people examined were infected with hookworms. Better-off people had a lower risk and intensity of infection. Females showed lower prevalence and intensity of hookworm infection than males, except women aged 50 years and above, who were the most heavily infected. Preschool-aged children had the lowest infection levels. Hookworm transmission appeared to occur within, rather than between villages. Hookworm infections are widespread in the Champasack province, with homogeneous infection intensity and somewhat lower infection risk west of the Mekong River, which offers higher living conditions. Hookworm control should be intensified in the Champasack province, particularly in the mountainous areas.

Impact of hookworm infection and deworming on anaemia in non-pregnant populations: a systematic review

Jennifer Smith,  Simon J. Brooker (2010)
Objectives To summarise age- and intensity-stratified associations between human hookworm infection and anaemia and to quantify the impact of treatment with the benzimidazoles, albendazole and mebendazole, on haemoglobin and anaemia in non-pregnant populations. Methods Electronic databases (MEDLINE, EMBASE, PubMed) were searched for relevant studies published between 1980 and 2009, regardless of language, and researchers contacted about potential data. Haemoglobin concentration (Hb) was compared between uninfected individuals and individuals harbouring hookworm infections of different intensities, expressed as standardised mean differences (SMD) and 95% confidence intervals (CI). Meta-analysis of randomised control trials (RCTs) investigated the impact of treatment on Hb and anaemia. Results Twenty-three cross-sectional studies, six pre- and post-intervention studies and 14 trials were included. Among cross-sectional studies, moderate- and heavy-intensity hookworm infections were associated with lower Hb in school-aged children, while all levels of infection intensity were associated with lower Hb in adults. Among RCTs using albendazole, impact of treatment corresponded to a 1.89 g/l increase (95%CI: 0.13–3.63) in mean Hb while mebendazole had no impact. There was a positive impact of 2.37 g/l (95%CI: 1.33–3.50) on mean Hb when albendazole was co-administered with praziquantel, but no apparent additional benefit of treatment with benzimidazoles combined with iron supplementation. The mean impact of treatment with benzimidazoles alone on moderate anaemia was small (relative risk (RR) 0.87) with a larger effect when combined with praziquantel (RR 0.61). Conclusions Anaemia is most strongly associated with moderate and heavy hookworm infection. The impact of anthelmintic treatment is greatest when albendazole is co-administered with praziquantel.

This investigation was funded by the Swiss National Science Foundation and the Swiss Agency for Development and Cooperation (project no. NF3270B0-110020). The funders had no role in study design, data collection and analysis, decision to publish, or preparation of the manuscript.